When Rocco Rossi announced that he'd build a tunnel connecting the Allen and Gardiner expressways, I thought that he had lost his marbles. Many critics noted that it was a desperate move, and some went so far as to say that it solidified his place as a fringe candidate. I can't say I disagree with any of this: the plan - if it can even be called that - is so outlandish and misguided that one couldn't help but question the mayoral candidate's sanity. And let's not even begin to talk about those Sopranos/Goodfellas-style ads...

Today's announcement on the other hand is far more promising. While it's still ambitious given Toronto's existing bike lane network, it'd be the type of infrastructure development that could drastically increase the ease and safety by which cyclists travel without sending traffic into gridlock.

The chief characteristic of the plan is that Rossi's bike lanes would all feature a curb to separate cyclists from traffic. Now this is something that cyclists have wanted for years, so when mayoral candidates who are down in the polls suggest plans of this nature it doesn't necessarily inspire much hope that they'll come to fruition. Sarah Thomson, for instance, has also announced her intention to create such bike lanes, in her case on Richmond, Adelaide, and University Avenue.

The thing that I like about Rossi's plan, however, is that even if (when) he doesn't win the mayoral election, the proposal itself strikes me as mostly sound, and thus something that anybody but Rob Ford might deem worth considering. 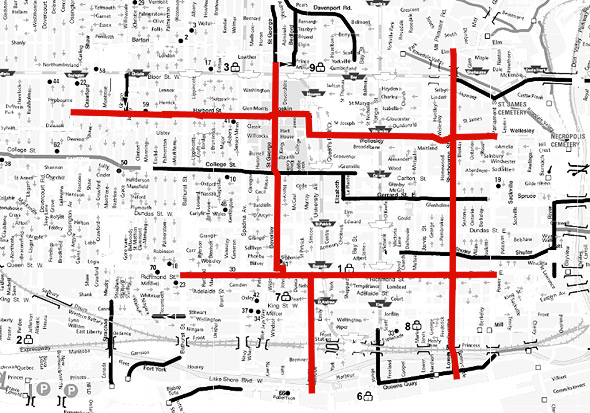 Like Thomson, Rossi envisions separated bike lanes on Richmond, but that's were the similarities of the plans end. Where Thomson would also have lanes on Adelaide and University Avenue, Rossi's plan would see them implemented on streets that already feature regular painted lanes. Moreover, the streets that he's identified are, from a vehicular traffic standpoint, hardly crippled by the existing cycling infrastructure.

Both candidates are onto something with the Richmond St. proposal. This is a street that, particularly to the east and west of the corridor framed by Jarvis and University, is quiet enough to lose a lane of traffic to an east/west bike lane, though it would likely need more than a curb as a separator with cyclists headed in both directions on street that runs one-way westbound (I would suspect this is why Thomson proposes a parallel lane on Adelaide).

But, it's the addition of St. George/Beverley and Sherbourne that I think makes the Rossi plan superior. There was already a circus surrounding the proposal to add bike lanes to University this summer, and despite the fact that the city council vote was close (15-13 against), it's dubious that the next council would come to a different conclusion. The routes that Rossi's proposing, on the other hand, are on non-arterial roads that already feature bike lanes.

It's not home run, of course - no proposal for separated bike lanes in this city is. But, it's well thought out, and should force people to think "why wouldn't we try this?"

There are a few reasons. The Sherbourne bike lane - and the road in general - is in horrible shape and would require significant repairs to make it suitable to large numbers of commuters. The implementation of separated bike lanes on Harbord might also be problematic. I'm not sure how the elimination of on-street parking in the Spadina-Bathurst corridor could be avoided.

But, putting these issues aside for a second - becuase there will always be problems and sacrifices - this is exactly the type of cycling plans that candidates should be proposing. And while it's surprising that it comes from Rossi, he who was so critical of the Jarvis bike lanes, perhaps the folly of his tunnel idea has brought him to this more sensible proposal.