Bed bugs seem to be everywhere in Toronto: residences, hospitals, hotels and libraries. Even movie theatre patrons are (notoriously) reporting outbreaks. But how did it all start? Only a few years ago, "don't let the bed bugs bite" seemed an archaic way to wish someone a restful sleep. Now, it's a legitimate concern. Read on to discover how a tiny bug became a major problem for our city.

1880s in England - 75% of homes are infested with bed bugs. Although there is no data for Toronto, the bed bug problem is likely comparable. If the current infestation is left untreated, a similar percentage of homes could become infected.

1940s and 1950s - Pesticides, in conjunction with concerted efforts on the part of governments, essentially eradicate bed bugs as a pest in Western countries.

1970s - DDT use becomes increasingly restricted in Canada. In the 1980s, it is outright banned. A decline in DDT use has been suggested as the cause of the bed bug resurgence. However, bed bugs were showing signs of resistance to DDT as early as 1947.

2005 - 197 requests are made to Toronto Public Health for help dealing with bed bugs.

2006 - The number of reports made to Toronto Public Health drops slightly to 147. Maciej Ceglowski, a Romanian, creates bedbugregistry.com after being bitten by bed bugs in San Francisco. Toronto is one of seven North American cities that Ceglowski includes on his site.

November 12, 2007 - Councillor Paula Fletcher argues bed bugs should be declared a "health hazard." In response, the Board of Health requests the Medical Officer of Health prepare a report on bed bugs.

2007 - One unnamed pest control company reports to Woodgreen Community Services that they made 4,800 treatments in 2007.

February 2008 - The Board of Health recommends that Toronto should launch an action committee against bed bugs.

November 12, 2008 - The Medical Officer of Health releases a report on the status of the infestation. The report suggests that although progress has been made, more work needs to be done to create a coordinated response. Funding to help vulnerable groups is recommended. 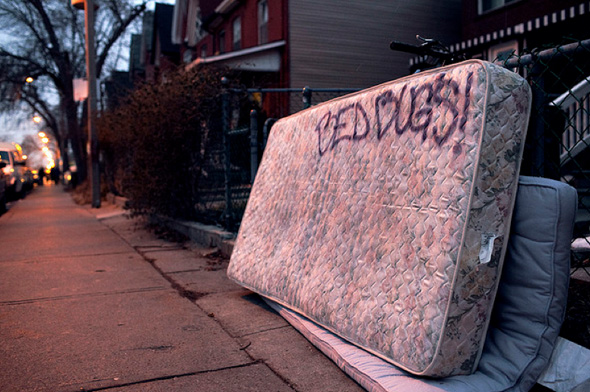 November 19, 2009 - Woodgreen Community Services releases its encyclopedic report on bed bugs, "Bed Bugs Are Back: Are We Ready?" Their answer is a definitive, "No." Without treatment, the report argues that bed bugs could become endemic in homes, offices, schools, movie theatres and public transit.

March 30, 2010 - The Toronto Star's map of bedbug infestations in 2009 lets you try to figure out which areas of the city are free from bed bugs. Hint: very few of them.

June 3, 2010 - MPP Mike Colle introduces the Renters Right to Know Act in the provincial parliament. If it passes, it will force all landlords to disclose to potential tenants whether or not the residence has had any problems with bed bugs in the last five years.

July 13, 2010 - Insight Pharmaceuticals puts Toronto as number three on their list of North American cities most infested with bed bugs.

August 24, 2010 - MPP Mike Colle announces a bed bug summit at Queen's Park will be held on September 29. Music writer Helen Spitzer comes back from a screening of Scott Pilgrim at the Scotiabank Theatre with what looks like bed bug bites. After getting the runaround with Cineplex's phone system, she tells her friend (and Twitter user) James Rocchi about her concerns.

August 30, 2010 - James Rocchi tweets "Bad, Bad news from Toronto re: #TIFF10: Torontonian Friend got, yes, bedbugs at the Scotiabank -- aka where all press screenings are." Cameron Bailey and Cineplex fight back to ensure the resulting brouhaha does not disrupt the fest.

The future? - With no magic bullet to defeat the critters, and a still-evolving public response, the infestation looks like it is going to get worse before it gets better.

Need more information, trying to figure out whether you have bed bugs, and wondering how to get rid of them? Woodgreen Community Services has produced this helpful guide. And contact Toronto Public Health to report any bed bug problems.

Lead image from Wikimedia Commons. Second by mandrs in the blogTO Flickr pool.