On June 28th, buried deep on the TTC's website under its construction tab, was an interesting announcement: "On Wednesday, June 30, 2010, streetcar service will resume to the community and local businesses on St. Clair Avenue West between Lansdowne Avenue and Gunns loop." In other words, for the first time in five years, streetcar service would run the entire length of St Clair. I decided to take a test drive of the newly "complete" line.

The good news is that the line is relatively fast. I hopped on Gunns Loop at 3:38. We arrived at St Clair West station at 3:54, and we coasted into St Clair station at 4:01. In other words, it took about 23 minutes to travel the whole line. Admittedly, the car I was riding in was not particularly busy. However, I took a fuller streetcar back part of the way and it ran nearly as fast.

The right-of-way (ROW) also helps improve one of the biggest headaches about streetcars: bunching caused by traffic congestion. This makes the service more consistent and reliable. 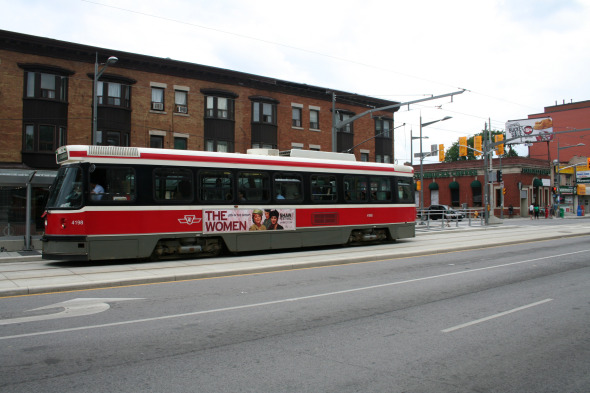 The performance of the streetcar is definitely the good. But as most people know, the St Clair streetcar ROW construction and street beautification has not been all smiles and sunshine. On this site, we've already noted the negative effect drawn-out construction had on the local businesses. This has probably improved recently - the street seemed fairly lively when I rode the streetcar.

But from an urban planning and design perspective, there is another issue with the streetscape improvements. They show a lack of professionalism. First, a caveat: these are clearly a work in progress. There are traffic cones along many sections of the street, particularly near Gunns Loop, indicating where future work needs to be done. The shelters at Old Weston Road have no glass for the roofs, but these will likely be fixed.

But what has been completed does not make the city's organizational abilities look good. Various parts of the street's furniture show shoddy construction, poor design, a strict adherence to a plan rather than common sense, a lack of funds, and likely, a politically expedited construction to avoid embarrassment at the polls. 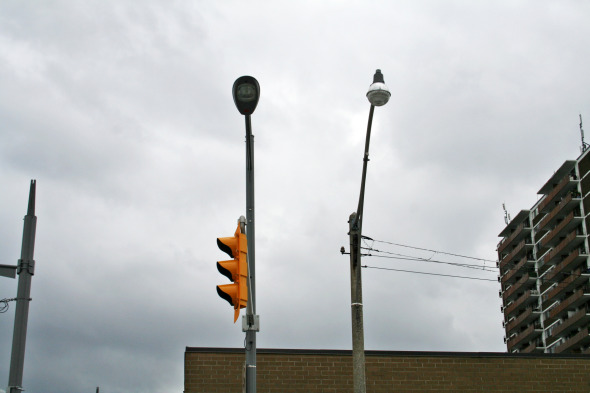 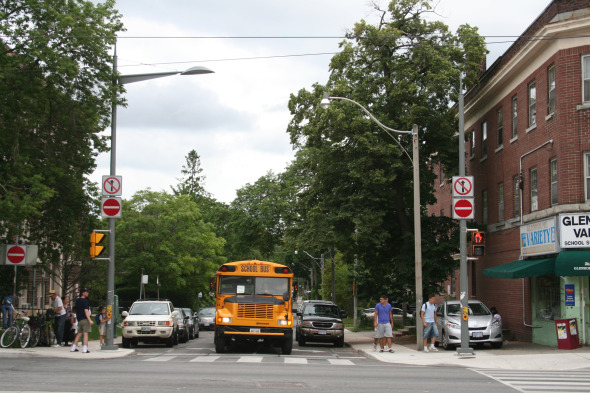 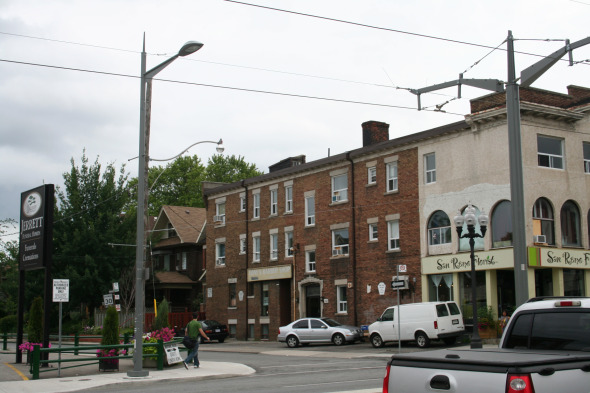 Sometimes, there are two different ones on either side of the same street. In the Corso Italia section of St Clair, there are three light standards: along with these two are the "old-timey" ones that the BIA put in. Even worse, east of Bathurst, some of the new light standards are attached to old wooden hydro poles. 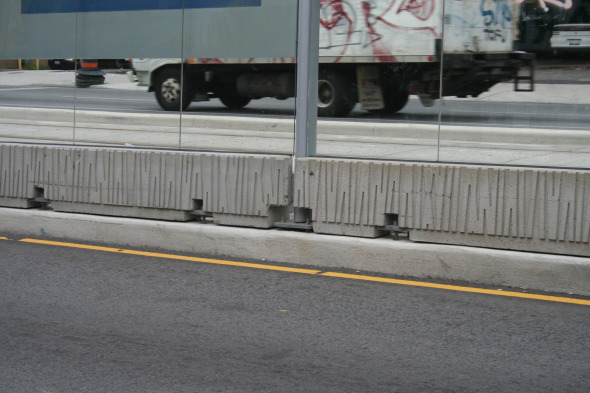 Streetcar stops. The very seventies-looking precast on the outside of the stops is already crumbled and damaged. Although some wear-and-tear is to be expected, the entire line is still relatively new. What will it look like in two years? 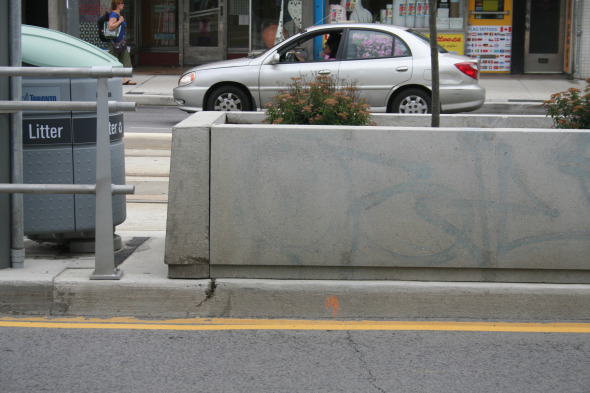 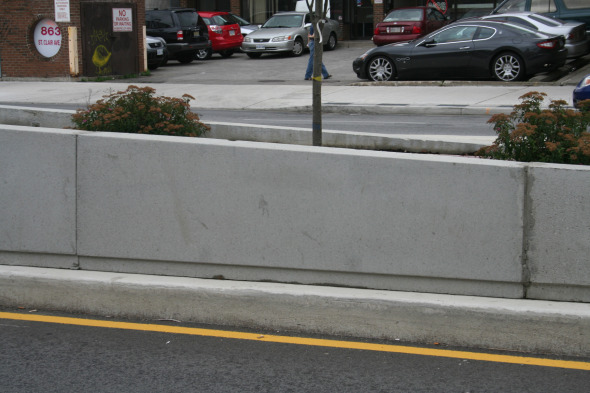 The planters for the trees at the streetcar stops look like they have been hastily assembled. The blocks that compose the planters sometimes have no gaps, and sometimes they are fairly far apart. Mortar is sometimes used, and sometimes not. Chips and cracks are already evident. 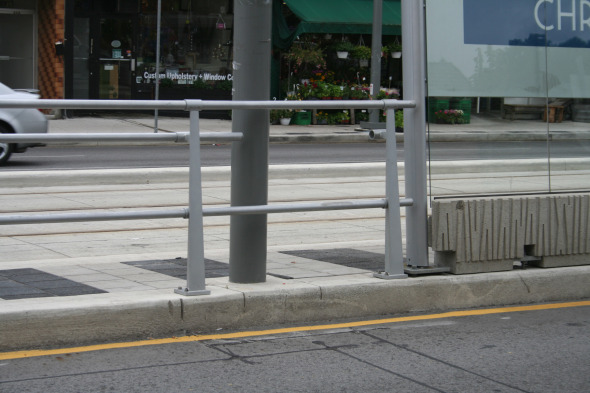 When a light standard is next to the streetcar stop's railing, the middle rail of the railing is left out. However, the holder for the rail remains. Could they not have had posts made without that middle holder? 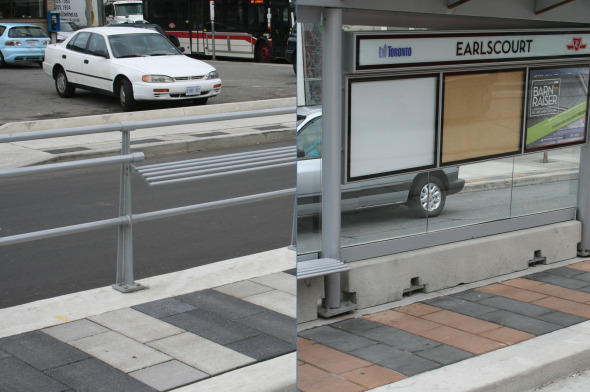 Pavers. Along the edge of the street, surrounding some of the trees, and in the streetcar stops are decorative pavers. They are usually dark grey and light grey. However, starting in Corso Italia and heading west, they become pinkish and dark grey. At about this point, the pavers are no longer used to edge the plots around the trees. Instead, pre-cast slabs are used with cutouts for the trunks. When you reach Keele, the pavers have switched back to dark grey and light grey, but the cutouts are still being used for the trees.

Although the change in colour may be a decorative choice, the fact it switches back, but the edging for the trees does not, seems to indicate some sloppiness of standards. It is also not clear - from a design standpoint - 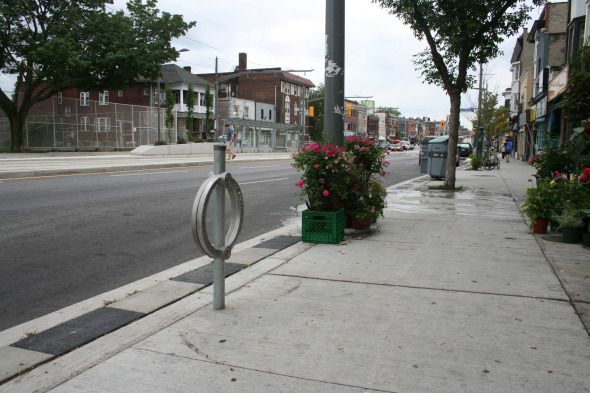 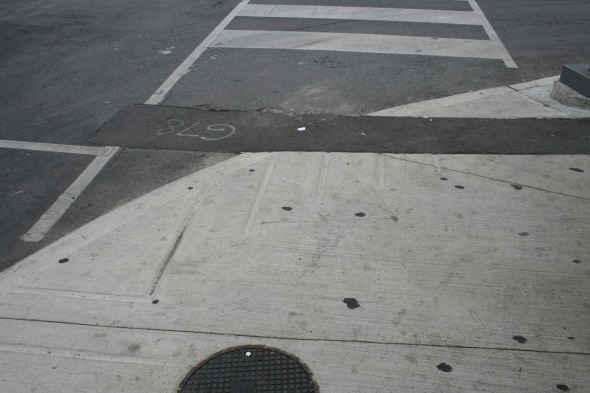 the colour suddenly changes.Bicycle locks. There are very few bicycle locks the entire length of St Clair, particularly around Winona. When there are bicycle locks, it appears that the business owner requested them, because there is occasionally one on an otherwise empty stretch of block. I saw a lot of bicycles locked to parking signs.Shoddy utilities fixes. Even though these streetscape improvements are fairly brand new, I already spotted one classic utilities fix (likely Toronto Hydro): dig hole in improved pavers, repair utility, fill hole with unattractive, mismatched splotch of asphalt. With some of the city's own employees destroying work that has been accomplished by another department, how can we hope to achieve anything?

Some of these issues may seem minor, and hopefully some of them remain to be fixed. Overall, the improvements are a step forward for St Clair. But, taken as a whole, these issues with the details of the streetscape show how poorly co-ordinated the whole project was. After all, if after five years of construction and millions of dollars, the city has difficulty ensuring planters are assembled correctly, it doesn't say much about its ability to get more complicated tasks accomplished.