Although the week lacked the drama of a Michael Bryant dismissal and much of our collective attention may have been directed south of the border, the city did, nevertheless, keep chugging away. So, to review...

"It's not a joke to pee into a woman's mouth." - Lenore Lukasik-Foss, chairwoman of the Women Abuse Working Group, who had (Rolling Stones-esque) mouth-shaped urinals removed from a Hamilton restaurant.

He's the mayor. I'm the deputy mayor...We have mutual respect, but I can't say we're friends. We don't go out drinking together or anything. - Joe Pantalone on his relationship with David Miller.

"There was inappropriate action or incidents that were going on, and due to that, we did take disciplinary action with the employees involved." - Acting Mississauga City Manager Martin Powell to the CBC on the hazing-like rituals that took place at the city's transportation and works department.

"If we can't produce a festival that provides a talent lineup that we think is appropriate, we won't go ahead with it." - Virgin Mobile Canada CMO Nathan Rosenberg on the cancellation of the 2010 Virgin Festival in Toronto.

"I will be mayor...but who I am doesn't matter" - Kevin Clarke at the Better Ballots mayoral debate. 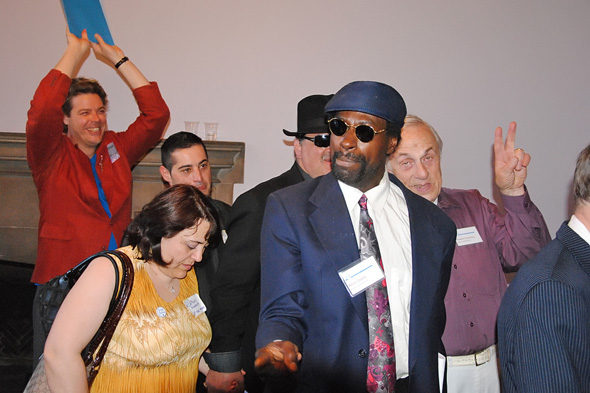 7% - The increase in Sarah Thomson's portion of the decided vote between April and May.

150 dB - The level of noise that "sound cannons" or LRADs will be able to blast at protesters during the upcoming G20.

1,000 - Pieces of street furniture to be removed from the downtown core during the G20 Summit.

$6,000 - The amount the TTC made in 2009 through their licensing agreement with Legacy Sportswear, the operator of the now defunct TTC Transit Stuff store in Union Station.

$225 - The starting price of a cremation at Toronto's first funeral home for pets.

90 kg - The weight of the numerous marble pieces currently being replaced on the exterior of First Canadian Place.

5' 1" - The height of Joe Pantalone, the putative "king of College Street" and a mayoral candidate in the upcoming municipal election.

$641,250 - The amount Alex Beason was ordered to pay for his role as the ringleader in the largest counterfeit scheme in the TTC's history. 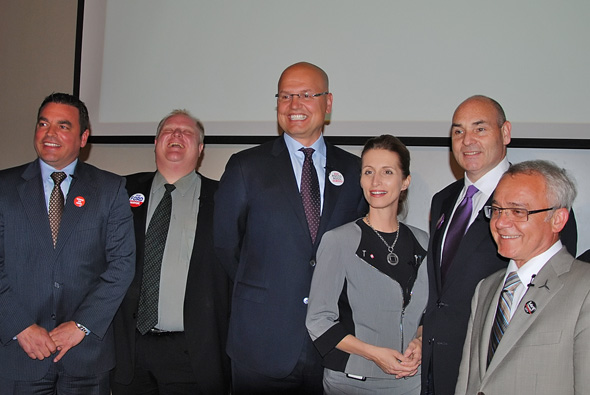 This is a tough one. Given the news that the Globe may no longer be the "journal of record" and that Torontoist has implicitly balked at whatever opportunity this impending hole represents, blogTO must step in. Environics, Toronto Star, Angus-Reid be damned! This is the poll to end polls, the survey to end elections!