Last night, the winners of the 6th Annual Pug Awards were announced in Baillie Court at the AGO. Self-described as the "People's Choice Awards for Architecture," the Pug Awards were started in 2004 to give the public a voice about the various projects that are being built in the city. This year was special. Not only were some of the best buildings built in Toronto last year recognized, but the city also got to hear from the leading mayoral hopefuls about how they would move Toronto's planning into the future. 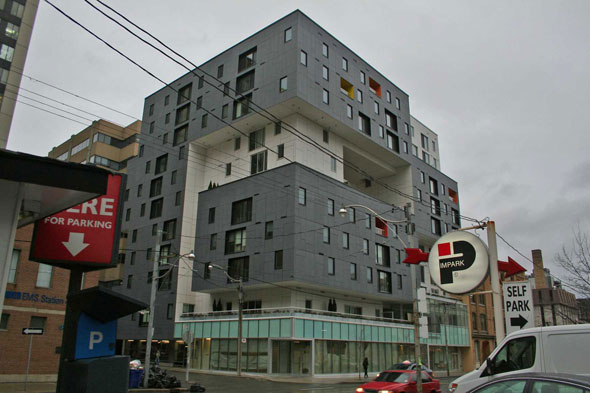 First, the winners: the Winner of the People's Choice Award for Best Residential Building was the Cooperative at 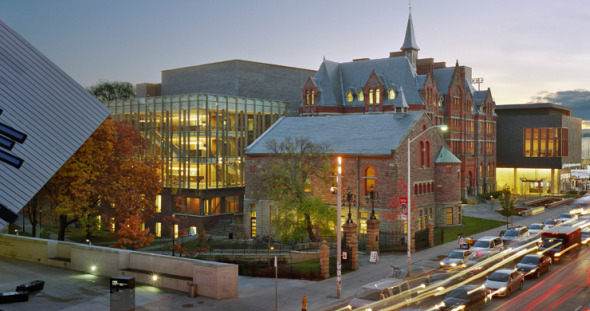 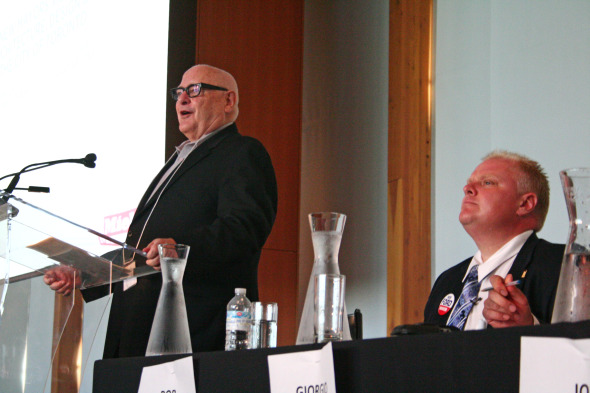 . With its innovative design, the Teeple-designed building was the definite favorite to win. The Runner-up was Pure Spirit in the Distillery District and Arc Condominiums won Honourable Mention.The Winner for the Commercial/Institutional was the Royal Conservatory Telus Centre for Performance and Learning. Runner-Up was the RBC Centre, and the Honourable Mention went to Bloorview Kids Rehab.
The night started out with John Bentley Mays, the Globe and Mail architecture columnist and MC for the evening, introducing former mayor David Crombie. Crombie gave a brief speech encouraging the candidates to "lead council to a significant, continuing regeneration of the public realm of this city."

After that each of the candidates were each asked a question they had been given time to prepare for: excluding transit and roads, what was their vision for the city's planning and architecture? (The question was based on a comment Adam Vaughan made at a Pug Ed discussion, and can be see at about 83:00 onwards 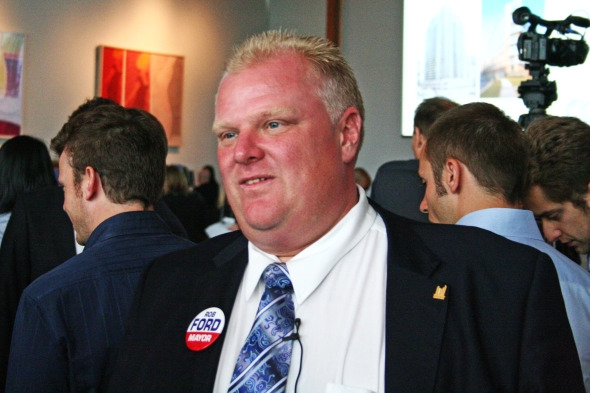 in this video). After that, the candidates were also asked several more questions by both the Pug Awards organizers and by the audience.
Rob Ford spoke first. In response to the prepared question, he spent most of his allotted three minutes talking about his business background, his time on council and his family. In response, someone in the crowd shouted "Answer the question!" Ford claimed developers don't want to build here and because of that, "We can talk about beautiful designs and architecture. But unfortunately, if we don't lower the tax rate this city won't function properly." This seems to ignore the concerns that many citizens have about too much development, not too little development.

Ford also reiterated that he wanted to cut down on the number of councillors, but did not specify how this would help city planning or urban design. At one point, he boasted that he made "Rexdale look like Rosedale," and he complained about all the "graffiti downtown." 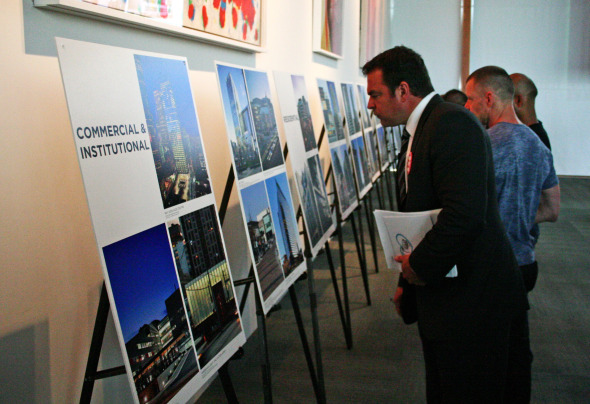 After Ford spoke, Giorgio Mammoliti talked about cutting the time that developments take to be processed in the city, and he suggested it should be made faster by cutting out internal city planners altogether. He also suggested that developments that featured good design should pay a lower tax rate.

Mammoliti emphasized his experience with the Emery Village BIA. Under Mammoliti's guidance the BIA has agreed to erect a 50-storey flagpole. As this

National Post article pointed out, at least one member of the BIA is uncertain how this will help the neighbourhood.
Joe Pantalone, as the deputy mayor, argued that the city is doing quite well. He pointed out his experience in bringing about BMO Field and the Direct Energy Centre. He wants to take the city from "fantastic to amazing." He disagreed about the city's financial situation. He mentioned that the city has no deficit, and that it "has a lot of money. We just need to channel it."

Pantalone refrained from making any sharp criticisms of the past few years; however, he said that city planning has to go from "reactive to proactive." He seemed to contradict himself by saying that the reason this didn't happen before was "probably financial reasons." Overall, he advocated small steps: "Evolution is slow, but it gets you there." 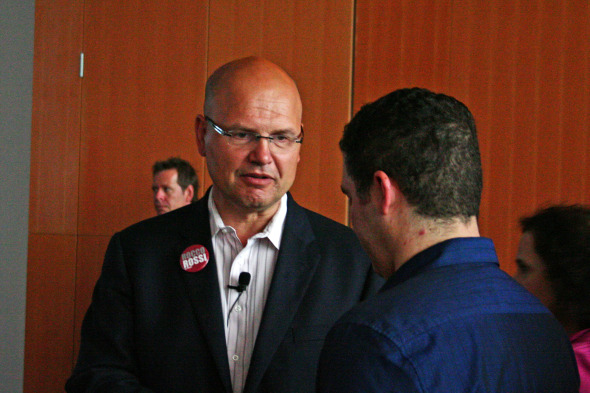 Rocco Rossi argued that planning "is the foremost task city hall has to do." He wants to look to New York for the answers and hire a Planning Commissioner that reports directly to the mayor. He also thinks that as it stands, the current planning process is opaque to developers. Rossi thinks a more proactive planning process that makes community and council concerns known upfront would help reduce the cost spent fighting developments.

Rossi was the only candidate who specifically mentioned one of the Pug Award nominees as a favourite: he liked the 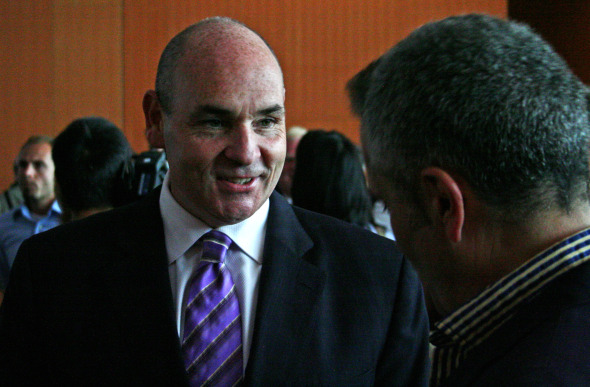 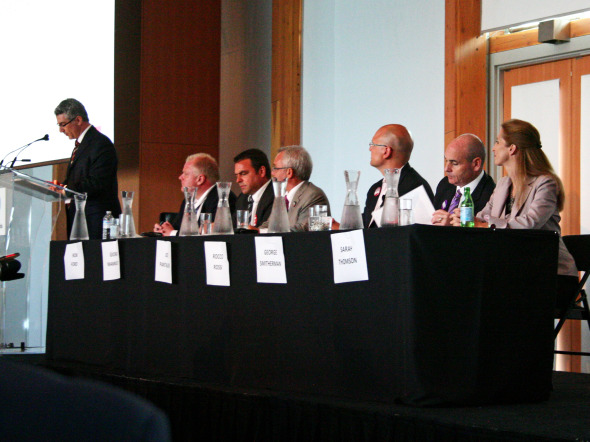 because he felt it made something beautiful out of what could have been simply utilitarian.
George Smitherman almost didn't make it to the Pug Talk. In the end, he had to leave before the questioning had finished. Smitherman emphasized that communities should be given a chance to give their feedback "much earlier on in the process." Like Rossi and Pantalone, he wanted planning to go from reactive to proactive. He also joined Hume in getting angry about the situation with the hockey arena in the Portlands. Like the two other non-councillor candidates, Smitherman was somewhat light on details.
Sarah Thomson brought out a list of ten ways to improve Toronto's planning, which she says was inspired by feedback from the public. Many of them were admirable, if potentially costly, such as burying the hydro lines and creating better public spaces. Others, such as creating a "Design Standards Board" seem strange when we already have one (although it is not as comprehensive as she suggests).

In general, her proposals seemed to be positive, but it is not immediately clear how it will fit into the current system or where the money will come from to pay for them. However, Thomson, like Rossi, seemed the most enthused about the event: they were the only candidates I saw who remained to the end of the Pug Awards.

Overall, it was an exciting night for architecture, planning and urban design in the city. What do you think of the winning buildings and the candidates' responses?

All photos by Matthew Harris except for the Royal Conservatory, which is from KPMB.