Kew Gardens is more like a town centre than a quiet, restful garden, although you can find a spot to sit meditatively, too.

I approach Kew from the Martin Goodman trail at the southeast corner of the park. The tennis players are out, one of the courts has a basket full of practice balls, but there are still a few courts available, which surprises me: I expected to see them all filled up at this hour. 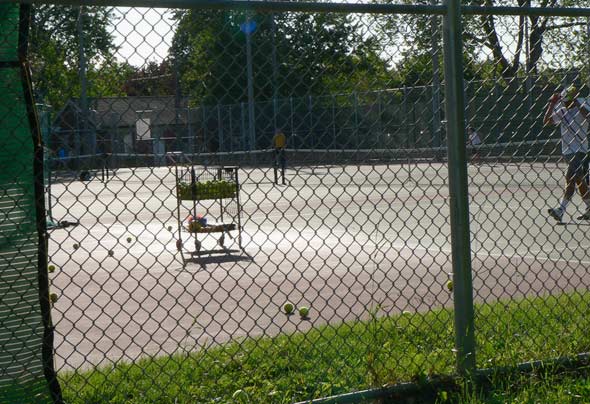 Behind me, people are out for a stroll along the boardwalk, many with dogs on leashes. We're near the section of the beach that allows for off-leash dogs.

Lots of people milling about on a Monday evening: it looks like the local lacrosse league competes now. I watch through the chain link fence what seems to be the end of one practice game and beginning of the next, as one pair of teams heads out, and another group takes to the concrete rink. It's tough for the kids to catch the ball in their netted sticks, and then throw with any level of accuracy. Lots of parental types and players waiting their turn at the boards cheering them on, coaches shouting instructions and encouragement. 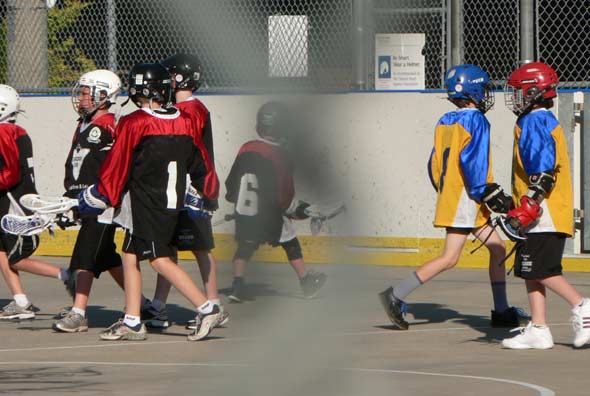 Penetrating deeper into the park, I walk my bike along the path through a lovely tree covered walk - biking is not allowed in the park. 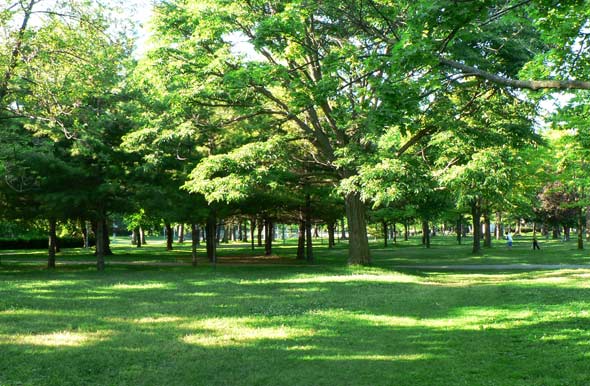 A baseball diamond over to the east. A game is in progress here, too, but the bleachers are empty and not set up for the diamond, and there aren't as many spectators. 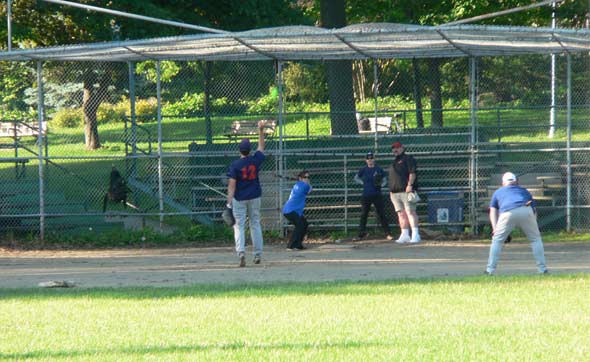 Continuing north, a children's playground with swings and a castle to climb around on has lots of users, moms and dads swinging their kids and talking to each other. Nobody climbing on the castle, just mostly really young kids with their parents. 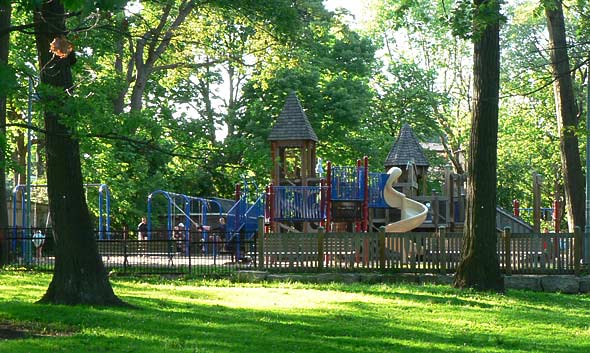 When I look at an aerial view on Google Maps, I can see what looks like a large splash pad for young kids just to the north of the play area, but somehow I miss it. Probably because I was looking for more interesting paths than the one that runs along the play area.

The north end of Kew Gardens has a couple of paths branching to the east that lead east through a wooded naturalized area to a large grassy space. Just to the north is the Beaches library branch, and some garden beds are ahead of me. 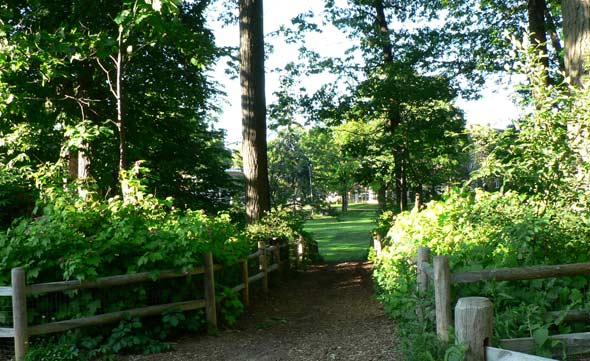 This large area is where people sit and listen to Jazz bands playing the gazebo during the annual Jazz Festival. 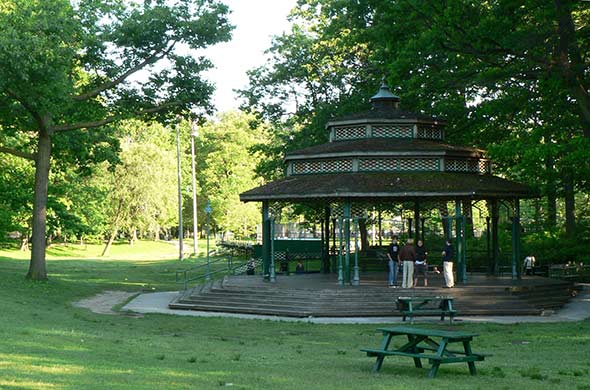 Moving south and toward Lee Avenue, I follow the flowerbeds. First they lead me to the memorial to Dr. William D. Young, with drinking fountains on all four sides of a rather insipid statue of a child. The memorial is quite impressive - the architect was certainly proud of his work, as his name is also memorialized on the plaque to Dr. Young. 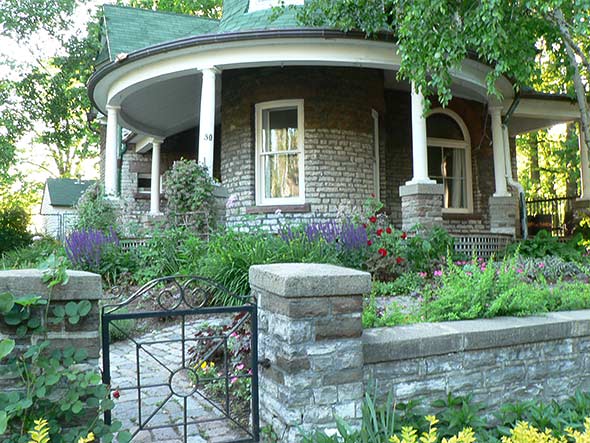 Attractive plantings surround the house, which has sometimes been opened for the Doors Open weekend in Toronto. Not today, though, so I have to content myself with walking around the outside of it, admiring some of the roses in bloom together with the salvia and other perennials.

Further south, there's the empty Beaches Lawn Bowling pitches, perfectly smooth, perfectly flat, and they me think of how long this park has been around - since before Toronto had annexed the land this far, and it was farmland and a few cottages for people in Toronto who could afford that sort of thing. Not a whole lot of people playing lawn bowling these days. It always conjures up images of men and women wearing white clothes, who have lots of leisure time. I should check on it some weekend and see if the players fit my mental stereotype.

My walk finishes up at the beach house, before coming back out on the boardwalk and looking to the lifeguard station and off-leash dog area, where the tree shadows are growing long in the evening light. 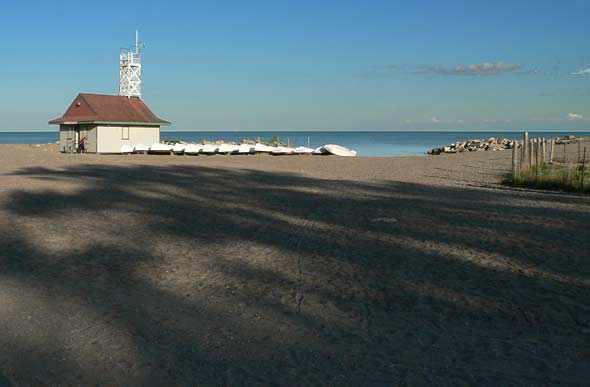 It's definitely a sports and entertainment type of park, aimed at families who live in the extended neighbourhood, and is a good example of the type of multi-use park that we need in Toronto, where people walk unafraid, meet their neighbours, and cement a sense of community.

How to get there:

By TTC: Subway or bus to Queen East, 501 Neville Park streetcar to Lee Avenue.
By Bike: Take the Martin Goodman waterfront trail east, which turns in at Ashbridges Bay Park Rd and parallels the boardwalk.
By Car: to Queen Street East, try the side streets for a parking space. Parking is really tight, so it could be a significant walk to the park.

More and larger photos of Kew Gardens are available on my Flickr.