Inside the Queen and Spadina detention zone

As a Torontonian and photographer, I set out this weekend to capture footage of the protests but never to interfere or intervene. After a few phone calls on Sunday, I made the decision to follow a group that was leaving Dundas Square. The protest was peaceful. In fact, the most violent act I witnessed until later that evening was a gentleman jumping on a bus shelter. He was asked down by police but not arrested. 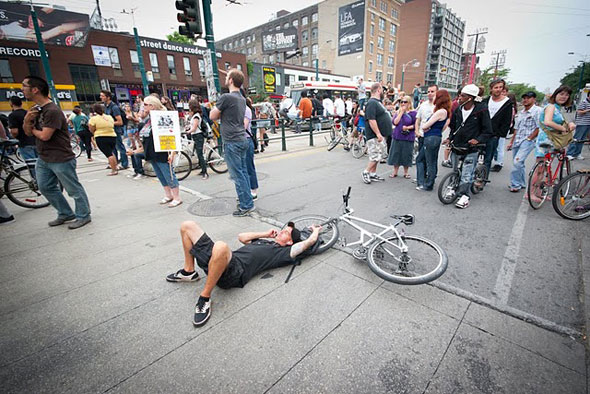 Once we got to Queen and Spadina, many protesters decided to sit on the ground. They chanted, "Who's streets? Our Streets." as they sat in various groups at the intersection.

To be quite frank, I stopped shooting. I had all the images I wanted of this group and decided to head northbound to capture the TTC street car backup.

Approaching the first streetcar I noticed a male being chased for a few meters before being apprehended. I pulled my camera to my face and snapped that shutter. The individual was then taken to an alleyway on the west side with heavy police presence. I continued to shoot the line when another coach bus arrived.

Off the bus came riot police ready for action. They began to advance toward us. In the chaos I asked one officer where I should move. He replied to me "South on Spadina or East on Bulwer St." Not being familiar with Bulwer St., I decided to head down Spadina. I was suddenly trapped in the "detention zone". 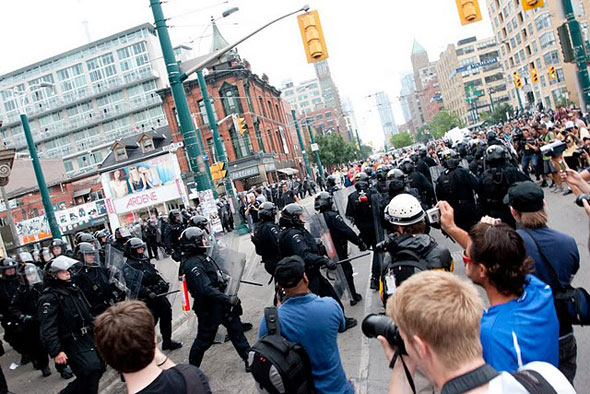 No one in the crowd seemed to understand what was taking place. The police say that we were warned, but I was not, nor were a lot of the people I spoke with. A lot of us weren't sure what was even going on to be quite honest. We figured the police were protecting us from something that was going on east of the intersection because of the way they had cut us off.

Eventually, a car pulled up to the middle of the intersection and a gentleman in standard Toronto Police Service uniform got out. He began pointing at people in our crowd as three "burly" RCMP officers ran past the police line to makes arrests. 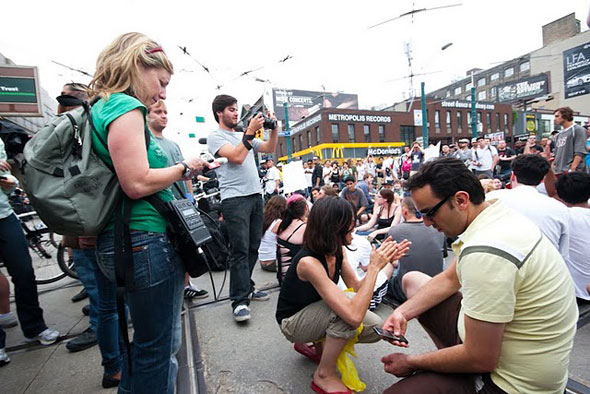 By attending this protest I knew the risks of being possibly arrested. I'm not complaining about being detained. I understood the urgency of the situation. But I wasn't impressed at the way some of my fellow non-violent citizens were being treated. I witnessed a male in his late 60s being arrested, two fourteen-year-old girls being held among a whole host of people.

Once the rain hit I ran to someone with an umbrella and kindly asked him if I could share it with him. Two other people came and the four of us shared one umbrella despite getting absolutely soaked regardless. The jokes starting coming out, "Stephen Harper owes me a new iPhone" one newfound friend said to our group followed by a chuckle from all of us. 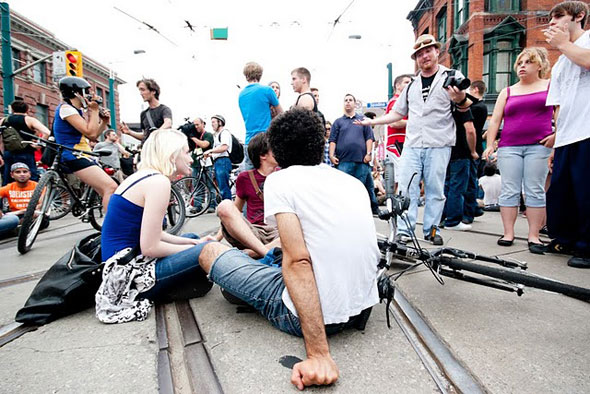 Eventually people were so sick of standing in the rain that a line formed. It was a line to be arrested. I decided to wait around as I had a hunch that the police wouldn't want to process 200 people, especially if half of them weren't protesters to begin with. Four hours later the rain died down and anyone who wasn't arrested was let free. All in all it wasn't that bad - but I'll always feel for the people who were simply at the wrong place at the wrong time. 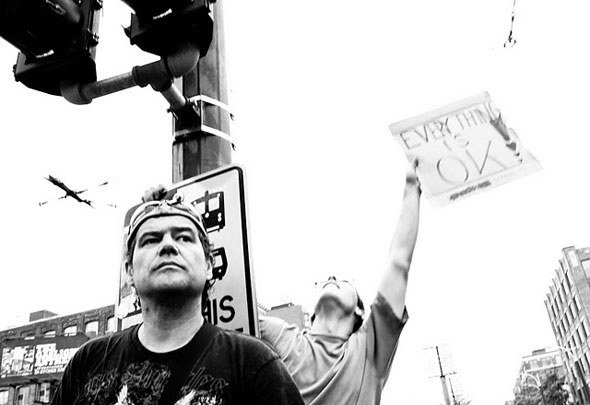 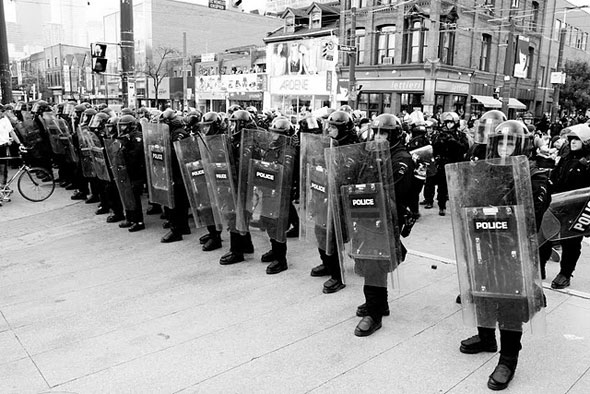 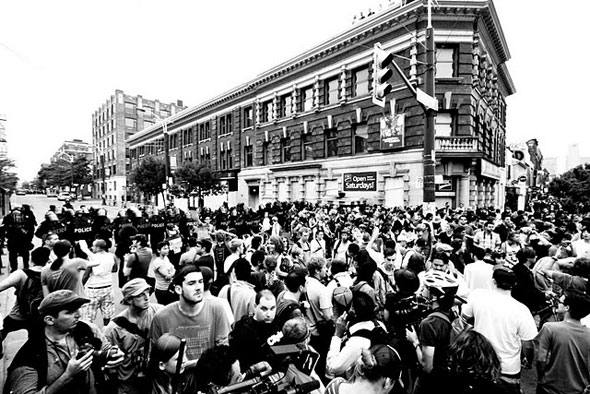 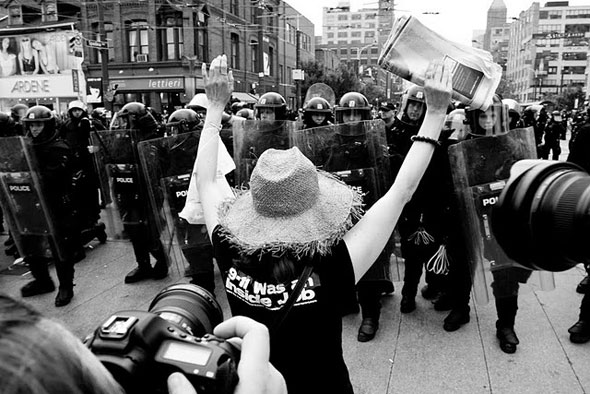 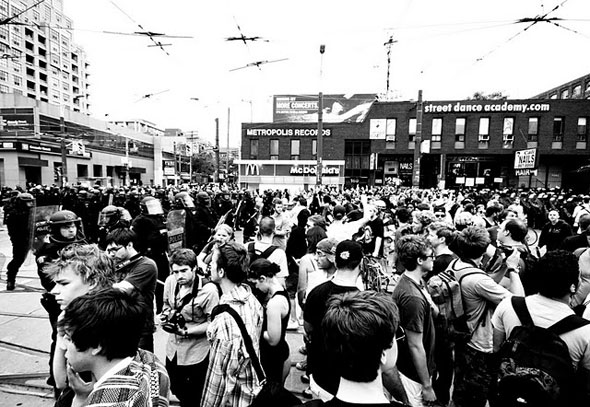 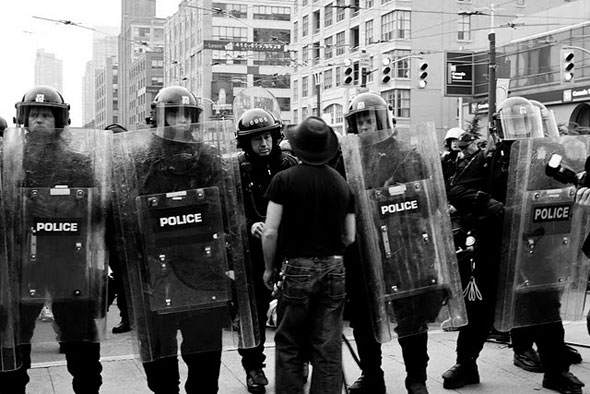 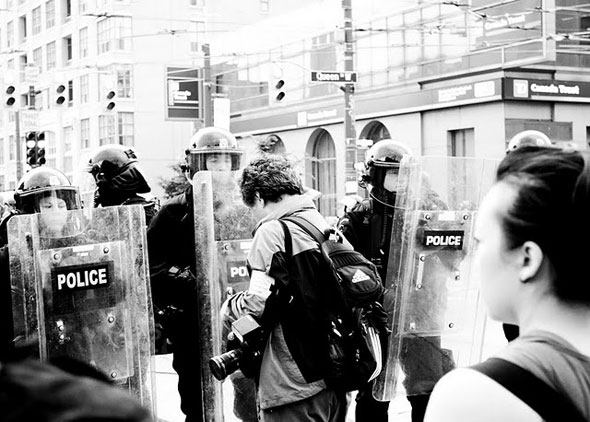 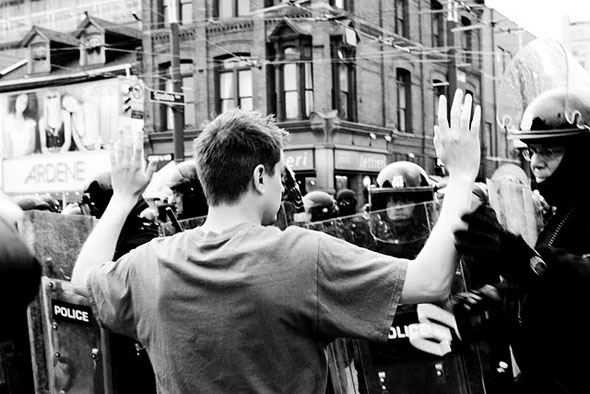 All photos by Dennis Marciniak