Are east-side Torontonians smarter than west-enders? A study released by the Fraser Institute this weekend, which reveals that Toronto secondary schools rank dead last in the GTA overall, got me thinking.

In addition to inner-city schools overall low rank relative to those in the suburbs, what's also really interesting is that there is a clear delineation that separates the east and west core.

Downtown Toronto area schools at both the elementary and high school level are clustered by rank in the core, with schools east of Bathurst being generally high in ranking and those west of Bathurst scoring much lower. 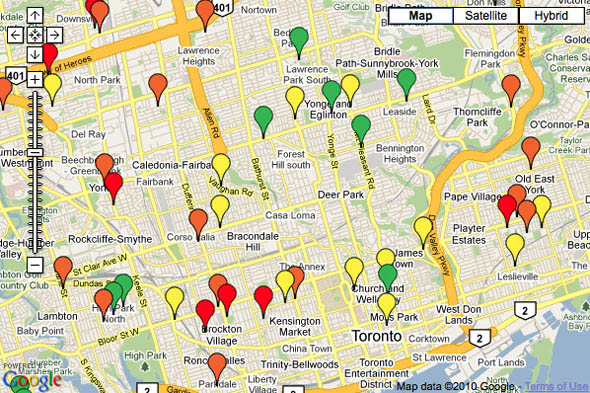 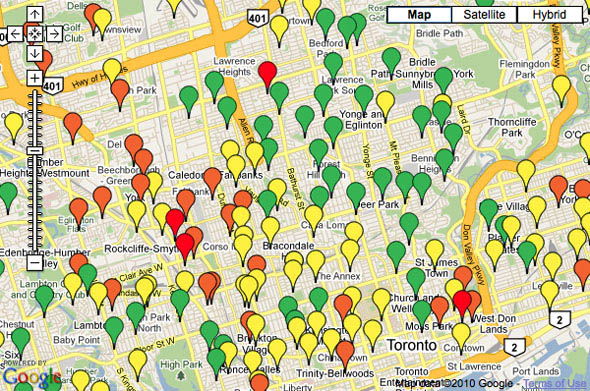 Perhaps once these kids get out of school and into the real world, we'll see how quality of education effects the long-standing east versus west divide.

But in looking at the maps, it's not just an east and west divide that become immediately evident; pockets of both high and low socioeconomic status within the city are quite clearly defined as well. Affluent neighbourhoods like Yonge & Eglinton are swimming happily in a sea of green, while neighbourhoods like Jamestown/Regent Park, Weston, and much of Scarborough are swarmed in orange and red.

How much of this is related to the quality of teachers and resources in these areas? How much is related to kids in struggling areas being disadvantaged from the start?

Wouldn't it be incredible if the TDSB made a landmark decision to all at once cycle all staff and funding from top performing schools to poorly performing schools and vice-versa? Would the positive effects brought to the kids most need be enough to justify compromising the quality of learning in privileged areas?

Lead photo by chewie2008~, member of the blogTO Flickr pool.