Last Sunday I went out to Chef Michael Stadtländer's Eigensinn Farm in Singhampton. I had never been to Singhampton before - but you may have driven through it on your way to Collingwood, Blue Mountain or Wasaga Beach.

Stadtländer is an internationally renowned chef, whose farm-to-table eatery at Eigensinn was 15 years ahead of the locavore movement now taking hold of the city and has been ranked as one of the top ten best restaurants in the world.

He belongs to a small cult of conscious chefs, Dan Barber and David Kinch among them, that have a strong conviction for expressing in their food the land on which they work. 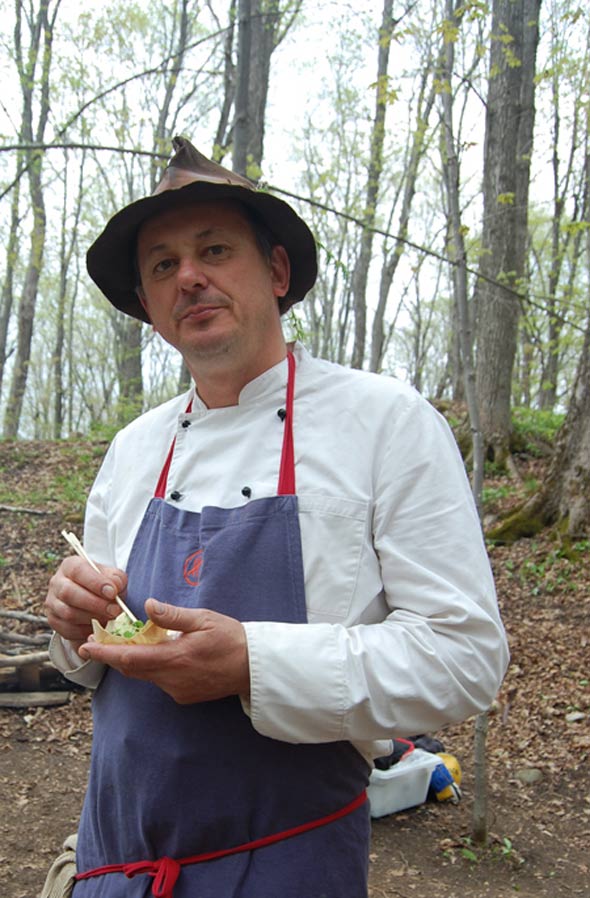 A third generation farmer himself, Stadtländer grew up in northern Germany. His interest in Canada started there, where he watched NFB documentaries and a CBC series on Manitoulin Island.

After hooking up with Toronto's locavore sweetheart/underdog Jamie Kennedy in Switzerland during the 1980s, the two returned to Canada to run the newly opened Scaramouche. After two of his own restaurant attempts in Toronto failed, and the opportunity to buy his own patch of land presented itself, Stadtländer's struck a deal with a loan shark and Eigensinn Farm was born in 1993.

I was at Eigensinn working for the annual Wild Leek and Maple Syrup Festival, a gathering of (mostly Torontonian) chefs and eaters whose appreciation for wild leeks bring them to the farm for a truly unique eating experience.

Perched up at the back of Stadtländer's 100 acres of land, chefs and cooks from restaurants like Hiro Sushi, Kaseiki Sakura, The Drake, Frank, George Brown's Chef School, Bohmer, Oyster Boy, Earth, Gilead Café & Bistro, and others set up shop under the forest cover. Some set up grill stations over fire pits, while others used huge split tree trunks to create stations from which to serve the 120 or so guests that came in.

The forest floor was covered with wild leeks; you could see the sprouts everywhere. Excited cooks roved the grounds for them, but I kept my nose clean. Stadtländer takes special care in harvesting his ramps sustainably. Their explosive popularity over the last few years means that wild leek populations are over-harvested and are in danger in many areas in Ontario and Quebec. 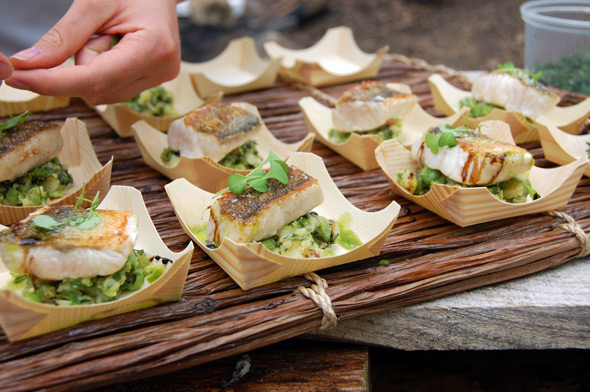 With the star ingredients being wild leeks and maple syrup, there was some amazing food. Many chefs used local fish - mackerel, perch, pickerel, and lake trout to name a few. But there was also beef tongue, pork, goat, and rabbit - all jazzed up with the unique and versatile flavour of ramps. 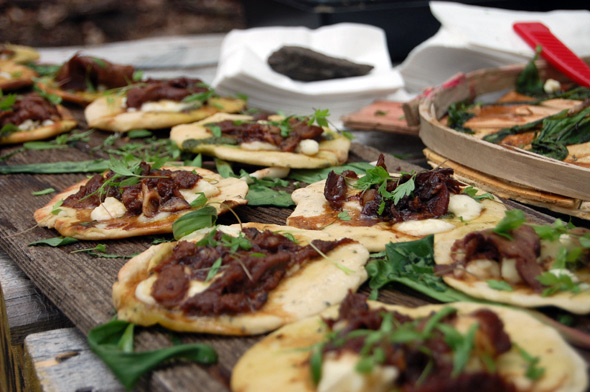 Guests wandered through the woods from station to station and everyone (cooks and guests alike) had a great time. It was the perfect setting. The rustic quality of our surroundings only helped to exemplify the honest approach each chef took in creating their dish for the event. 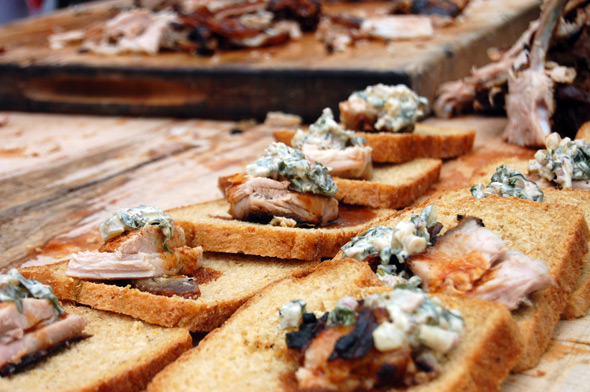 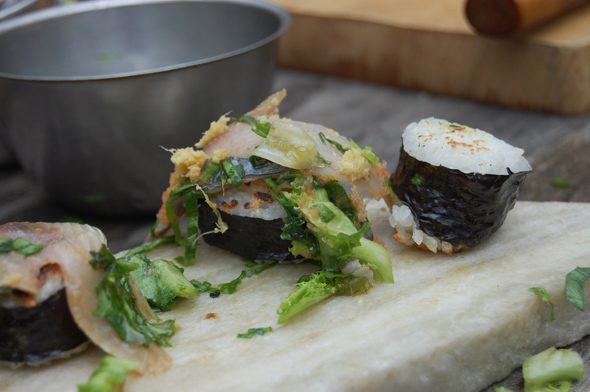 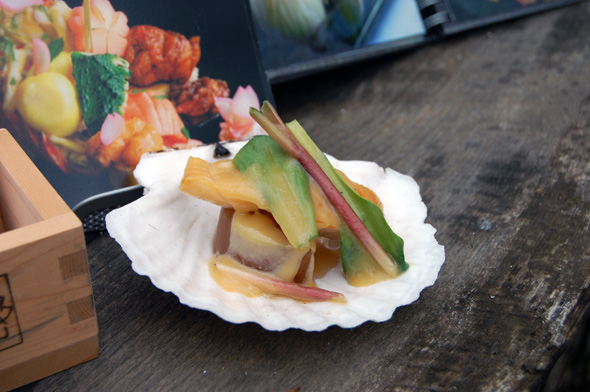 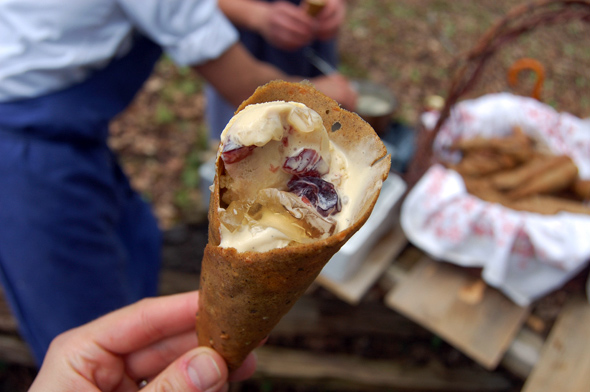 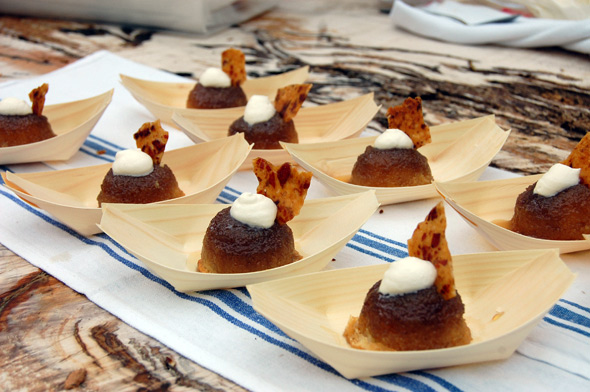 We also got a chance to poke around the farm, checking out the pigs, chickens and roosters that Eigensinn keeps. We hiked around his land and saw the fruits of one of Stadtländer's other passions: art and sculpting. 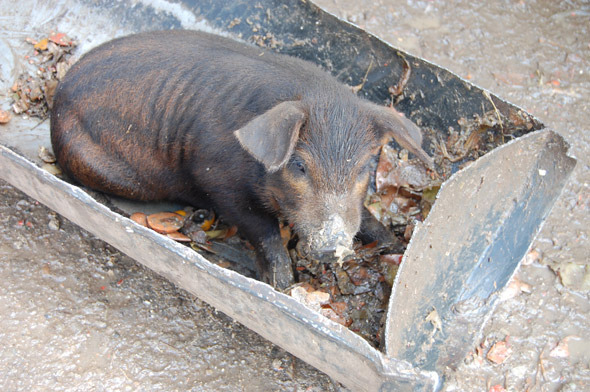 With the help of his apprentices, Stadtländer closed the restaurant and devoted a whole summer to creating functional works of art - a pig who doubles as a grill, while Mother Earth gives birth to bread and a giant Bacchus made from cement and wine bottles pours wine from a large glass erection. 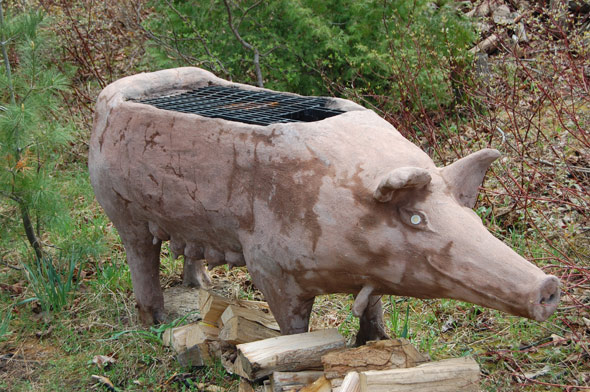 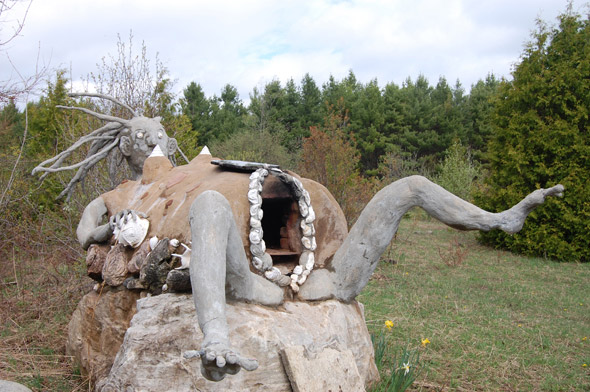 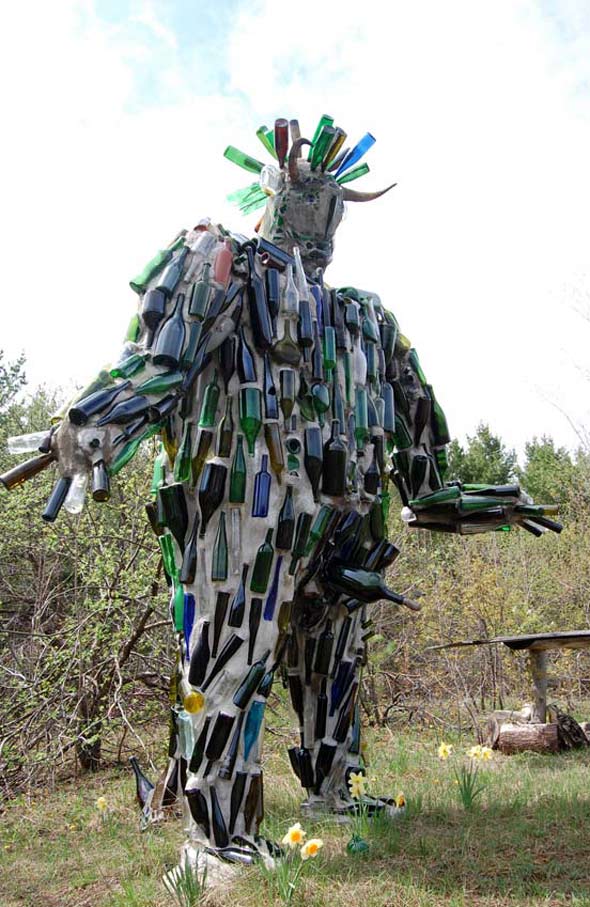 We rounded out the trip (and my stomach) with a pit-stop at Haisai. Stadtländer opened the 28-seat solar-powered bakery and restaurant in Singhampton's main village last year. It is a little less exclusive than the 12-seater farm dinners at Eigensinn, but every bit as authentic with most ingredients coming straight from the farm. 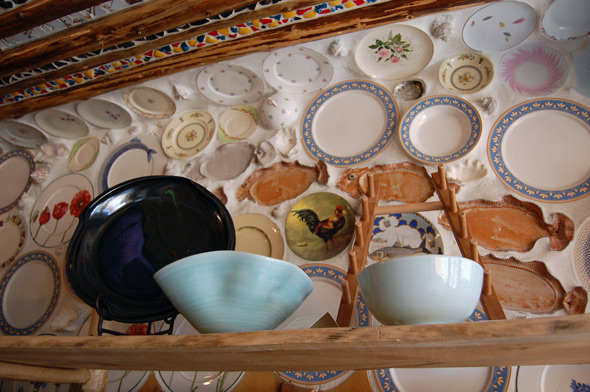 The space is amazing: walls encrusted with plates, ceramics, and shells while Stadtländer's own hand-made pottery and dishware holds the most decadent and delicious baked goods. The Crème D'Amande was so rich with butter it practically poured out of the thing. 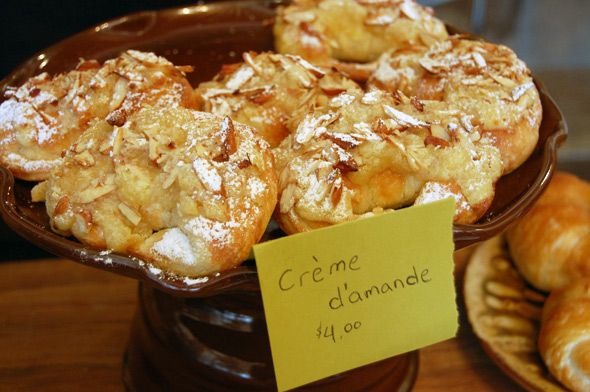 Meals at Eignesinn are often called "foodie pilgrimages" or "once in a lifetime experiences," and with a $275 price tag you might guess that's why. But Stadtländer has never much fussed about running his farm economically. The cost of doing things in an environmentally and socially conscious way hasn't been cheap, and about 60% of the food he cooks at his restaurants comes directly from the farm.

Canada has been criticized for lacking an identifiable food culture. There have even been debates on whether we should adopt poutine as our national dish. But when you look at guys like Stadtländer, Kennedy, and Chrystian (to name but a few), I think some people just aren't looking hard enough.