Photo: "hall" by rbostyle, member of the blogTO Flickr pool.

Yesterday was the annual free turkey for the needy day at Honest Ed's, and one man made sure he was at the front of the line to get one. Mariano Cordeiro waited 26 hours to ensure that he could get a frozen bird, which he plans to donate to St. Vincent de Paul's.

The G20 summit is coming to Toronto in June of 2010, not Muskoka, as was originally proposed. The venue change brings the leaders of industrialized nations together in Canada's largest city, to strategize recovery from the global economic crisis. Unfortunately, the summit often also entails protester control via fences, water cannons, tear gas, and leagues of riot police.

In what represents a much tamer form of crowd control, the TTC is announcing that their people-moving pilot project at Yonge and Bloor stations has been so successful that three additional trains per hour during peak periods are now able to load and unload passengers. The directional barriers that enhance crowd flow will become permanent fixtures.

The Toronto Sun has yet another piece ([broodingmovietrailervoice]"Dragging suicide from the shadows"[/broodingmovietrailervoice]) on suicide on the TTC, because the many they ran in the last couple of weeks weren't sufficient. Anyone want to wager how long it will be before they run yet another suicide story that includes mention of the subway stats that they forced the commission to release?

Been working hard at the 100-mile diet shopping and cooking concept? Eating locally-sourced food has been a goal for many environmentally-conscious foodies. But U of T professor Pierre Desrochers thinks local food isn't all it's cracked up to be, and that the movement will see an inevitable death.

Commuter news freebie Metro had a slip-up (intentional, or not?) today, when on page 10 (page 12 of the 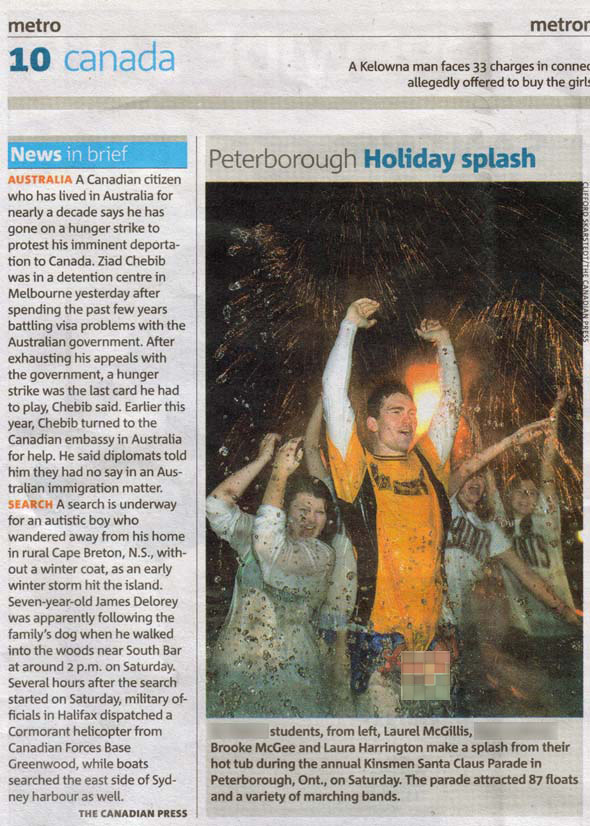 digital online version) they included a Canadian Press photo of a high school student at Peterborough's Santa Claus parade (partying in a hot tub, clothed, but with what appears to be his schlong hanging out). Hat tip to blogTO reader Troy, for the heads up.

And here's what blogTO was up to, while we weren't busy shopping and putting up our Christmas trees: