What's Next for Eastern Avenue?

Toronto has been criticized by visitors as being a sloppy city, and while that flies in the face of years of (mostly self-directed) propaganda about our civic orderliness, it's a hard charge to deny, especially when you walk or drive down a street like Eastern Avenue. To the north, there's the tightly packed homes along Victorian streets, and to the south, the remnants of portside industry, some of it still working, much of it repurposed into warehouses and studios for film, design and photography.

The houses were built for workers employed nearby, but they're long gone, and real estate values are becoming more in line with the standards set by Leslieville and Riverdale. It's a neighbourhood in transition, and conflicts are inevitable, such as the recent one over a plan to put a big box retail complex anchored by a Wal-Mart on the spot occupied by the now-shuttered Toronto Film Studios at the foot of Pape. It was opposed by a vocal group of locals and rejected by the Ontario Municipal Board earlier this year, and while there's still debate about what exactly happened, it put a momentary spotlight on a part of Toronto that embodies the city's past and future in just a dozen or so blocks. 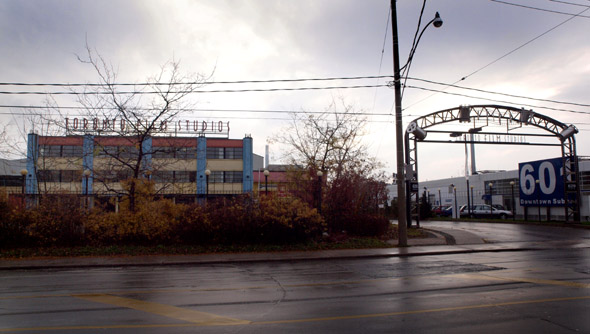 The studio site was rumoured as a potential depot for the LRT fleet that we're supposed to be acquiring, but councilor Paula Fletcher says that plan is off the boards. She was grateful to see the Wal-Mart plan defeated as well, and says that, at least for the near future, the film industry has precedent over anything else that'll be happening on the south side of Eastern.

"I don't think people realize the depth and degree of this being the centre of the film industry in the city," Fletcher tells me. "That's the lens through which everybody looks through development. The big box proposal became a nightmare for everyone because it closed down the film studio and looked like it would make trouble for the film industry as well -- it didn't look like the kind of employment that should be put into these lands." 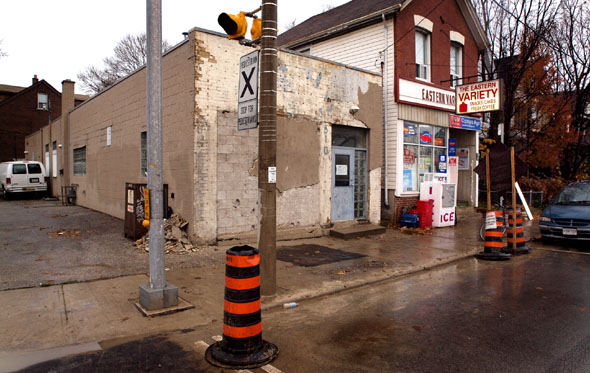 With much of the area zoned as employment lands, the houses on busy thoroughfares like Eastern and Carlaw are stuck in a sort of zoning limbo -- too hard to sell to aspirant new owners, but hard to repurpose for anything else. Still, Fletcher has hopes that a new employment study just being started by the city will eventually lead to more flexible zoning, especially as the OMB also rejected a planning study that proposed loosening things up when they killed the big box. 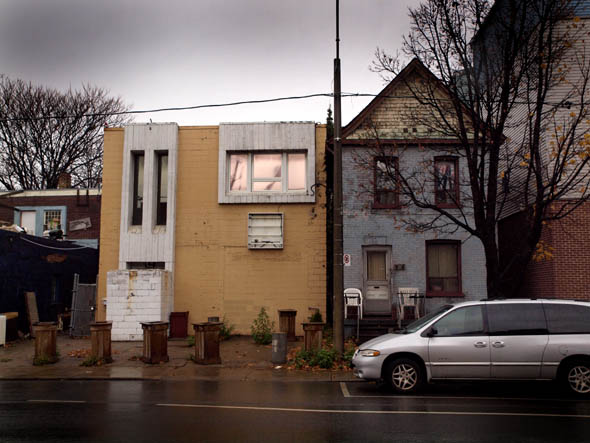 Older industries aren't exactly gone -- the sweet smell of baking bread still pours from the Weston building at Booth, but Lever has closed down near the foot of Broadview, and things are changing -- the Chinese World Journal newspaper recently vacated the old Consumer's Gas building at 415 Eastern, Urbacon, a commercial design firm, moved to Lake Shore Boulevard, and glitzy interior firm Yabu Pushelberg took a long-term lease on Booth Avenue. These are signs of the area's future, just as much as the vacated Hell's Angel's bunker clubhouse is a remnant of its past.

It's been almost three years since Derek Finkle and his wife Julie Mitchell moved their businesses to Eastern. He runs his literary agency out of the building that houses Parcel, her marketing company -- an industrial space on a prominent corner, right across from Gale's Snack Bar, a neighbourhood landmark and probably the most quintessential diner left in the city. Derelict for ten years, Finkle and Mitchell had to gut the building, which once housed an illegal duck egg farm, but they don't regret it at all.

"Why do business here? We're only a block away from what's going on up the street (on Queen.) Obviously we got this property for a pretty good deal -- we had to sink quite a bit of money into making it habitable, but however this area transforms, I don't think its value is going down." 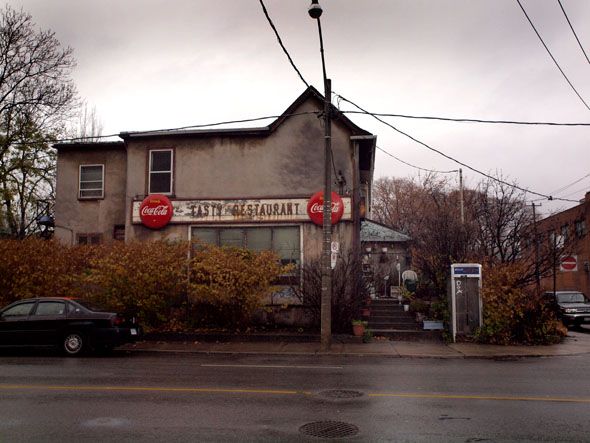 A few blocks west, Tommaso Conti opened his Italian trattoria nine months ago, and is downright bullish about Eastern. "We have the best people in the neighbourhood," he tells me, "and I say thank God. We've been pretty lucky, no headaches, no drunks, no bullshit -- nice, nice, nice."

He says that at least 30 per cent of his business is from the film studios nearby, and he'd like to see more. "I want it to be 99 per cent of my business. The company from England, 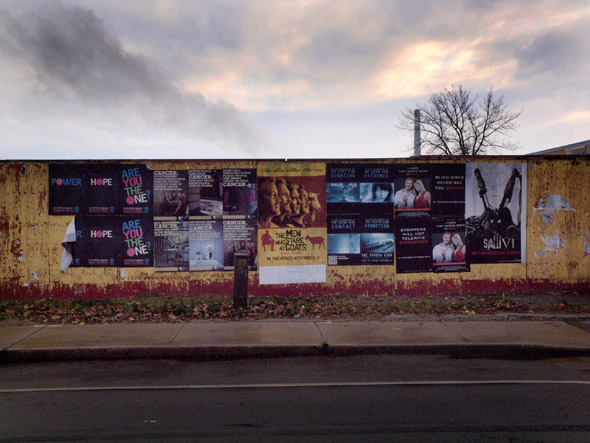 Pinewood, will take over the whole thing anyway. It's nice to see people from overseas making money in the neighbourhood -- like I did!"