Photo: "Locked Up" by Daifuku Sensei, member of the blogTO Flickr pool.

The president of the Toronto Humane Society, along with 4 fellow senior staff, were taken away in handcuffs yesterday when police raided the River Street animal shelter. Accusations of animal neglect and cruelty are coming from the Ontario Society for the Prevention of Cruelty to Animals (OSPCA). This whole situation is incredibly bizarre given that both organizations are advocates for animal welfare.

City Hall spends $150,000 a year on cable television service (that's for some 100 bills that come in as separate invoices). While the argument can certainly be made that access to local stations and news programming is essential to the duties of many staffers at city hall, the argument can also be made that they could save a bunch of money if they bought a bunch of these and a couple of these.

Mired in documents and heaps of work and delays, the Crown may be working on a deal for accused bike thief Igor Kenk. In the summer of 2008, about 100 police officers raided 12 properties, resulting in more than 80 charges (some related to illegal drugs as well). He's spent more than a year in jail, and if he gets released anytime soon I hope part of his probationary conditions force him to put a box over his head whenever he's within visual range of a bike.

For the second time in a year, arson is suspected at the Mahavihara Buddhist Meditation Centre temple in Toronto. Looks like someone could use a little zen therapy to tame the hate.

CP24 is reporting on an early morning Train vs. SUV collision that has affected GO service in and out of the city. 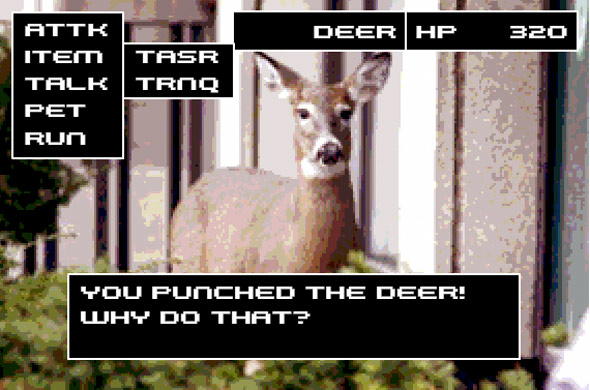 And ripped straight from headlines earlier this week, a local web game crew brings us... Deertase! Like most games inspired by fleeting news stories, Deertase falls short on gameplay but scores high on the sarcasm meter.