Havana Cultura Brings the Best of Cuba to Toronto

This past weekend the second annual Havana Cultura festival went down at various locations in the west end. With the purpose of celebrating all things Cuban, the festival hosted events like a cocktail clinic, cigar rolling demo, dance lesson, outdoor concert, and art exhibit.

Even local restos like The Drake, The Gladstone, and of course Julie's Cuban took part with themed menus and cocktails.

Over the weekend, Chris and I were able to check out several of these events. We started off with a Cuban cocktail clinic at Brooklynn on Saturday afternoon. There, forty of us were educated on the history of rum in Cuba according to Havana Club (they sponsored the event and much of the festival). Following the history lesson, we had a cocktail lesson on mixing several traditional Cuban cocktails like the Mojito, Daiquiri, and Cuba Libre. After a quiz, two people won trips to Cuba based on their scores.

After wetting our whistles with cocktails from the clinic, Chris headed over to Poutinis House of Poutine, rumored to be serving up steaming bowls of Havana-themed poutine. What could be more fantastic on what was turning out to be a damp but festive afternoon? 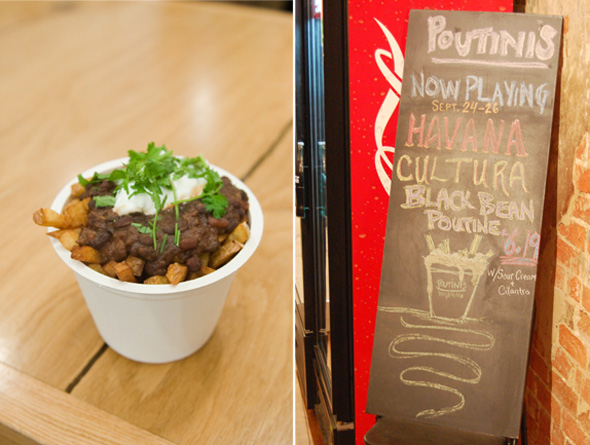 Upon arriving, he spotted several others gleefully chowing down on the festival themed treat, and so he decided to dive right in. Upon receiving a bowl of steamy bean goodness, he discovered that it was not poutine at all, but rather, fries topped with black beans, sour cream and cilantro. Not that this is a bad combination to start off with, however, it was lacking in the necessary essential ingredients that make poutine, actually poutine. It was tasty nonetheless, and hit the Havana spot that he was looking to fill.

Who doesn't enjoy a little puff on a cigar now and then, especially after diving into a few bottles of full-bodied red? When we heard Havana Cultura was hosting a cigar-rolling demo at The Parkdale Drink, we knew we had to be there to see just how these tight little bundles of delicious smokiness are made.

We arrived with a few others, at the time listed on the web site, only to find out that the event didn't start for another hour and a half. We were determined to unravel the cigars' secrets, so we decided to hang around the hood and come back later. When we returned, we were greeted by the oddly empty foyer and little direction about how the event was to go down. 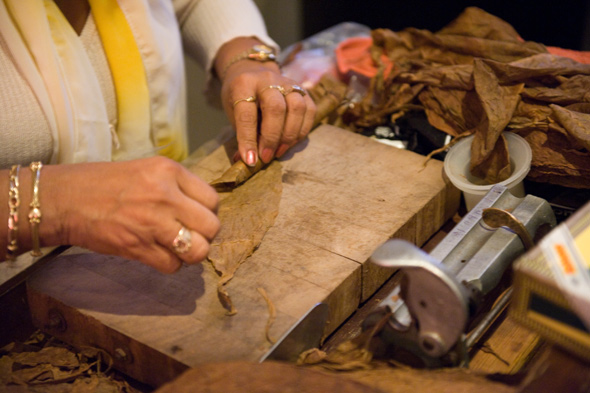 The lady rolling the cigars, while very talented, didn't speak English, and had no one to help her explain what she was doing. We stood, in silence, and watched as she lovingly hand-rolled and sealed each cigar. After watching a few times, we had a general idea of what took place. But we still had many questions about the process, and our dreams of one day rolling our own cigars went up in smoke. 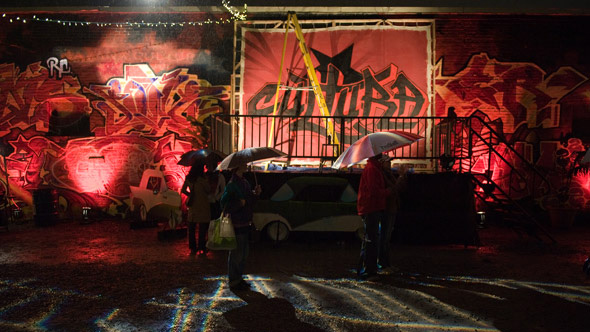 To cap off the evening, we hit up the outdoor street party where Cuban musicians such as Glenda del E, The Elmer Ferrer Band, Ogguere and Interactivo with Telmary, Francis del Rio and Roberto CarcassĂŠs played soulful jazzy and urban tunes. Even though there was hot food and a stocked bar, the rain definitely put a damper on things. It was unfortunate because it could have been a decent party, situated in the parking lot 1093 Queen Street West (right across from Poutini's). 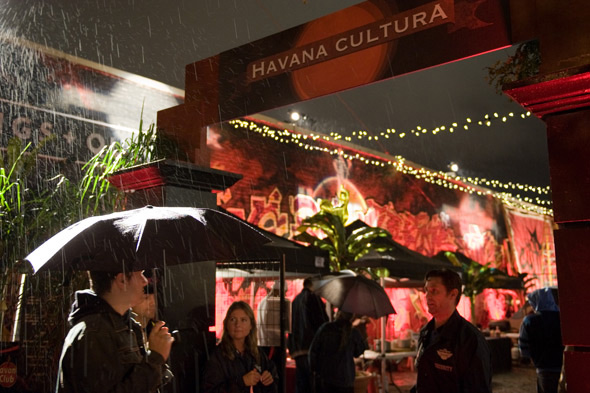 The Havana Cultura Festival aims to bring the excitement of cigar rolling, recreational drinking, upbeat jams, contemporary art, and interesting cuisine to Toronto. It was tossed into our melting pot to celebrate the vitality and downright fun lovin' nature of Cuban culture.

It would be much better suited to a hot summer's weekend, where people want to party outside late into the night with a sweaty mojito or daiquiri in hand. Being heavily sponsored by Havana Club rum and the Cuban Tourist Board, there was some serious money behind the festival. Unfortunately the vibe is almost a little too corporate chic and just misses the mark for exemplifying and translating the zest for life that we associate with Cuban culture.

Let's see what Havana Cultura will have in store for next year...

By Lauren Wilson and Chris Deboer.