Artscape's Wychwood Barns opened to huge fanfare this past November, and I've been curious how residents are feeling, now that the dust has settled. I had a chance this past week to check out both the work spaces and the live-work studios.

So far, Wychwood Barns is doing a pretty good job of living up to its community and environmental commitments - the 1913 former streetcar repair barns were the first heritage site in Toronto to seek LEED certification. The Barns' neighbours are flocking to the Saturday market and to new park areas (just being finished now), and the artists are slowly making the place their own.

When I arrive on Saturday, the door to Greg's studio is open, his patio table & chair are set up outside and his bicycle is propped nearby. Classical music is pouring from his open front door. A photographer, Greg is originally from Minnesota; he lived in New York City before moving to Toronto. "In a crazy kind of way, it's like Goldilocks: I've been in Minnesota, I've been in New York, and Toronto is just right. The city leaves me to do my work." Greg lives and works in one of the ground floor studio spaces on Benson Street.

what: Artscape live-work space
who: Greg, photographer
how much: rent-geared, 1/3 of income
layout: entrance landing, stairs down to single main room, plus bathroom.

"When they showed the plans I thought, 'I dunno if I can live in a space this small'...but I was living in Etobicoke and hating it," he says. "It's made such a difference to my disposition to be back in the city. I'm planning to travel, for shooting, and to do a residency back down in the States, so this [small living space] is fine." 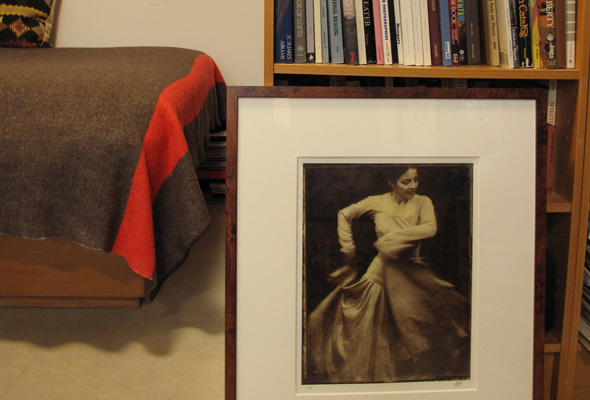 His photographs share some qualities with Sarah Moon's work - relying on layers and atmospheric processing, so he still does some work in a traditional darkroom. But mostly he works here, with his back to his kitchen, light from Benson Street filtering through the blinds. "Sometimes people actually peer in the windows, like it's a little zoo of artists." Greg shakes his head. "Doesn't bother me."

Around the corner, the Saturday market is in full swing. A drumming group is playing on the simple stage, children are dancing, and shoppers are stocking up on baked goods and produce. Greg holds out his arms: "THIS is why I moved in. Look at this!"

The market is the most obvious symbol of the Barns' success; inside the repurposed buildings, we stroll past different rehearsal spaces and offices (eleven different organizations use space here). The Barns host 26 live-work spaces, from tiny studios like Greg's on up, along with 25 work-only studios. There's also a gallery space. Greg sees a real potential to develop a legitimate art market in the neighbourhood. "I'm a community kind of person, so it's great for me." 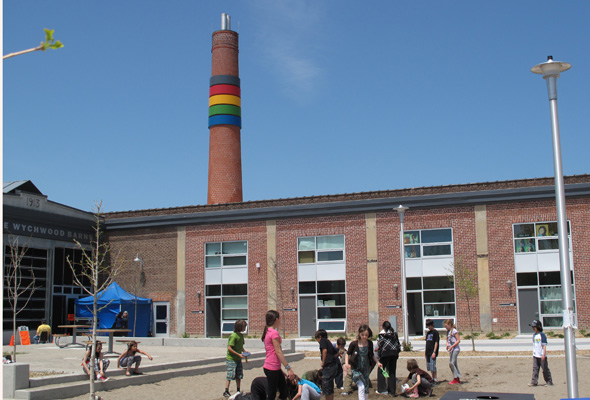 We skirt through the edge of Barn 2, which is given over to a film shoot for much of May (Scott Pilgrim vs. the World). Greg says a German friend visiting the Barns said, "'Yah, it's very Berlin.' Because it's been left decayed but renewed." He pauses to take in the skeletal construction on the far side of The Stop's future bake oven and outdoor garden. "Some people call Barn 5 the Ghost Barn," jokes Greg, since most of the building has disappeared.

While I'm visiting, architect Joe Lobko, of du Toit Architects, walks by with a tour group. He explains his vision to the group and admits his disappointment about the planned glass roof for the walkway of the artist spaces. Today, the roof is solid with only small skylights, which means the upstairs living spaces are darker than they were supposed to be.

We run into one of Greg's neighbours, 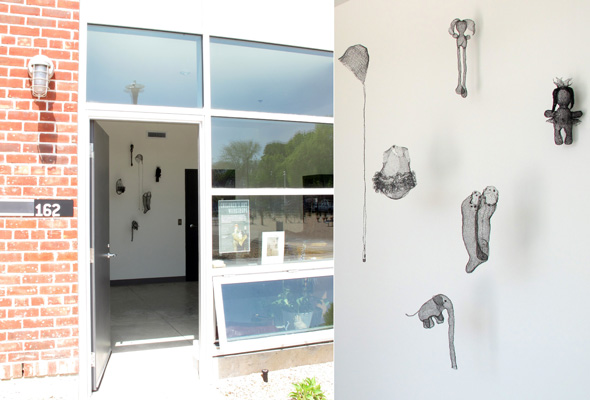 Lynn Jackson, who lives in one of the upper spaces. Despite the smaller skylights, she echoes Greg's delight at living here. "I feel like I won an award, to live here," she says. "[It's] a standard of living that really makes a difference to the creative work. The spaces are small but cozy." She's just setting up her metal sculpture in a newly-acquired work studio that faces the playground.

I come back to her work studio later in the week, to see the sculptures installed. "They're based on childhood memories, and clothes I had and my daughter has." The pieces are each hand-knit in copper wire, using regular knitting needles; originally, she created them for the 2008 Liverpool biennial.

Like Greg, she moved into her new loft in November. "There's just so much happening that you don't want to leave," she says. Greg agrees. "You get community-minded people here. What can this place turn into? What can we host here?" He smiles, as if he's part of a vast mad artistic experiment. And maybe he is. 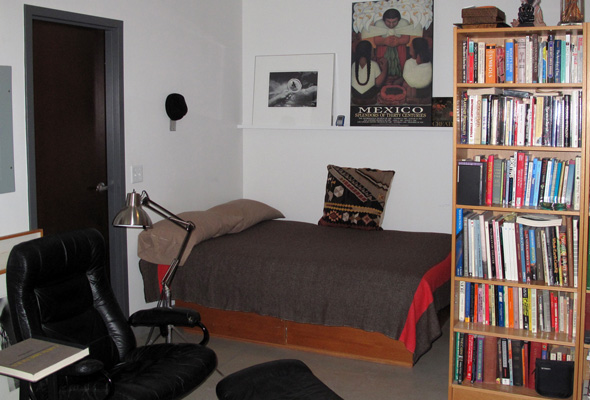 6 home questions
What do you love most about your home? "First, economics! And, when this came up, and I had enough to apply as a Canadian artist, to fulfill the mandate, I did like the idea that this was going to be a collection of artsy people."

What drives you crazy? A siren whips down the street just as I ask this question. "That fire truck drives me crazy! Because St. Claire is all torn up, the firetrucks blast down Benson!"

What's your favourite place in your home? The shared spaces of the building: "The [living] spaces are small. But the shared space, to show work, is exciting."

What's most surprising about this home? "I was worried it would be dark, but actually I'm happy."

If your home were a kind of fruit, what would it be? "A cluster of grapes!"