The Skinny on Zack Taylor

Zack Taylor has carved a name for himself as Canada's answer to gossip columnist Perez Hilton.

I first met Taylor, 21, who grew up and lives in Toronto, during the Canada's Next Top Model auditions. He attempted to steal the spotlight, if only for a few minutes, doing his best catwalk strut.

The spotlight is usually on the celebrities themselves, as revealed through his gossip website. Although he isn't afraid to pose and party with his Playboy posse. Taylor is now in the midst of a cross-Canada tour, hosting parties with Playboy's Lana Tailor (no relation). They're throwing a party at Nava in Richmond Hill tonight.

I asked him about Toronto celebrities, comparisons to Perez Hilton and dealing with the inevitable negative backlash of hosting a gossip blog site....

blogTO: You fancy yourself as "Canada's own Perez Hilton." What's up with that?

"I'm not trying to be the next Perez Hilton. I'm the first Zack Taylor. On my site I'm just taking a product -- a gossip blog -- and making it better. If I get compared to him, great. He's been very successful and I could only hope to achieve what he has, as I've only been around for a year or so. But overall, I feel my site is much different. I only report on the important stuff, what people care about, and I try to show as much support towards Canada as I can. I don't need to draw things on people's faces to be funny."

How else do you differ from what Perez Hilton does?

"Unlike Perez's site, I write all my own material as he has ghostwriters that do it for him. I like to interact more with my audience which I feel is a huge difference between the two sites." 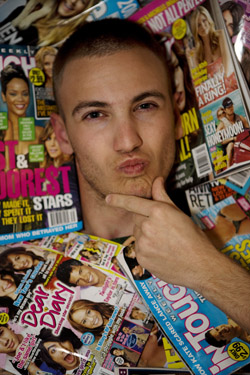 What has your personal interaction been, if any, with Perez Hilton?

"We first started talking back when I was a radio DJ on Y100 FM in Miami. He was still living in Miami and had just started his blog and we got him in the studio to do a few interviews. After that we continued to chat through emails, and I'd send him gossip tips.

"Once I started my own site, he stopped talking to me. No idea why. I didn't really care to ask.

"We've bumped into each other a few times at events in L.A. since, and really just don't speak a word to each other anymore. He's been asked about me in various articles and interviews but that's the extent he talks about me.

"I don't cover him on my site, he doesn't cover me. Simple."

How does your Toronto upbringing reflect the work you do?

"I try to support Canada as much as I can. We have so much talent here and I know how hard it is for bands, actors, etc. to get noticed on an international scale. So I try to use my blog to generate some hype for the artists I support from Toronto and the rest of Canada. I always try to remember my roots and I'll always be a Leaf's fan, no matter how many heartbreaks they put me through."

Who are your favourite Toronto celebrities?

"From Toronto, I love So You Think You Can Dance's Natalli Reznik, Lights and Playboy's Lana Tailor. And then the more famous ones such as Elisha Cuthbert, Rachel McAdams, Eugene Levy, Jim Carrey, Mike Myers and Hayden Christensen."

What's the best and worst thing you've heard about a celebrity?

"I've heard so much good and bad stuff. From affairs to sex tapes to marriages and having kids. If someone has a secret, it eventually gets to my ears."

Is there anything you wouldn't write about a celebrity on your site? What are your limits?

"Nothing is really off-limits, but I try to give each celebrity a chance to debate or give their view on the subject before I post it. I like to be fair because there are always two sides to each story. Sometimes three. But I'm also not going to sugar coat things, because nobody likes to read the same old bullshit.

What resources do you use to check sources of the gossip you hear about?

"I have many sources all over the world: People who are very close friends with certain celebrities, movie and music producers, PR reps, magazine reporters.... It's all about networking and I've been fortunate enough to cross paths with some very important people that have helped me out with what I do."

How do you deal with the negative backlash that tends to go with the territory of celebrity gossip?

"Everyone has an opinion. My whole blog is from my perspective. Obviously people are going to hate on me or disagree with what I have to say. But that's life. I don't take anything too personal, and I actually like reading the negative comments more than the positive ones. It means people actually care about what I'm saying and are passionate enough to submit an email or comment about the subject. I think freedom of speech is an amazing thing, and I always invite people to say whatever they want. It's what I do."

How many stops on this cross-Canada promo tour?

"Right now we've been on tour every weekend since the middle of march. We're finishing up in May, with a few extra stops over the summer all over the country."

Why'd you choose Nava nightclub for the Toronto party?

"It's a newer club in a different area than downtown Toronto. We wanted to venture out and give our fans a different experience. The club itself has hosted some pretty big celeb parties: Nick Carter's birthday, Tila Tequila, Mini Me, Steve Aoki.... There's gonna be some fun surprises for sure."

What's does the future hold for Zack Taylor?

"Expanding our brand, exploring the rest of the world and the hidden secrets of each celebrity. Possibly even a reality television show."