I wanted to visit the Foundry Lofts because a friend came back from a theatre rehearsal there and said, "You won't believe the shared central atrium. It's huge and industrial and you're gonna love it." The former warehouse is part of the old 60-acre Canada Foundry Company, not far from Corso Italia, at Davenport and Lansdowne. I jumped at the chance to visit Elisabeth in her new space.

The Canada Foundry Company set up shop on this site in 1903, moving from its Front Street location. Manufacturing steel and cast iron items, these buildings produced railway tracks, parts for bridges, fences, staircases, fire hydrants - and decorative dragons. Two of these now guard the reading room at the Toronto Archives. 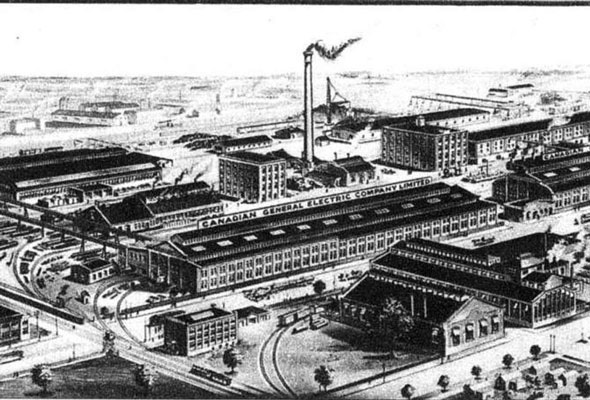 The foundry closed in 1981; through the 90s, the site was gradually cleared of industrial waste (with much concern from the neighbours), and the buildings became a popular film location. Finally, last year, several buildings were designated Heritage - in part because of the new inhabitants, who wanted to keep the huge disused smokestack just south of the lofts.

"The residents are really active, protecting the buildings," explains Elisabeth as she meets me at the front door. The smoke stack in question was once the 2nd highest structure in Canada; local residents and new loft owners were irate when one developer's plan suggested tearing it down. Now the smoke stack is staying, with a park planned for the west side of the development. There's a rumour that one of the other warehouses spaces, currently empty, will be dedicated to retail.

I'm astonished as we walk along the open walkway that leads to Elisabeth's apartment: the hall runs along the edge of a huge atrium, which takes up the whole centre space of the warehouse. Lit with huge original skylights, the 4-storey atrium is divided into north and south sections by a square brick building, which looks like a house landed in the middle of the warehouse. 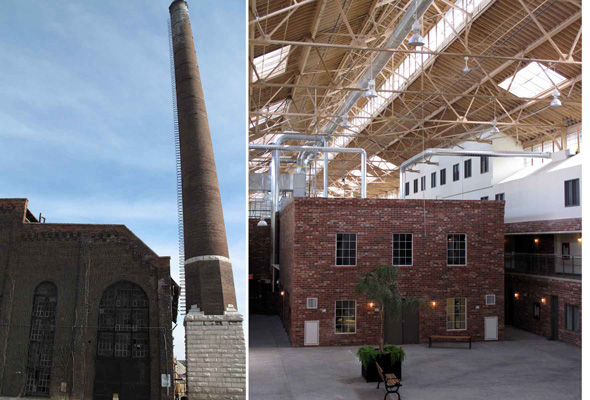 As we walk towards her door, Elisabeth points out a photographer's apartment and another belonging to a painter. "There are music jams, rehearsals - the little brick house has a board room and a party room, which is great to run rehearsals in." There's a sudden scream from the brick house. "Um," says Elisabeth, "Ignore that. It's my group, rehearsing." Sure enough, through the windows, I can see actors jumping around, holding scripts.

We stand in the second-floor hallway, chatting to one of Elisabeth's neighbours, Kennie, who is set up on a park bench with his laptop and coffee, on the ground floor of the Atrium. Dom Gemmell, a broker selling space in the building, stops to chat about the gallery that will have archival photos of the building.

"The Atrium is an open slate. Everyone has ideas for it," says Kennie. One suggestion is to install a green wall at the far end of the space - I would absolutely vote for that.

Meanwhile, the empty Atrium has hosted innumerable spontaneous parties, including a recent jam involving a resident cellist and a guitarist. "Imagine the space at one in the morning, with the dim light, and with cocktails. It was quite magical," says Elisabeth's partner, John.

Buying a new home sight-unseen, based only on computer-generated floor plans and hopeful sales reps, there are bound to be surprises. But Elisabeth says the main surprise is the building's sense of community. "Shortly after we moved in, I discovered the Facebook group for this building. Which led to us all getting together in the south atrium. The developer could have made the individual lofts wider, used more of the warehouse space. But they didn't. They chose this. I think you need space like this, to get the sense that we're a community. This public shared space, like a courtyard."

Everyone's door, and a few windows (which have frosted glass, for privacy) give onto the atrium. But mainly the lofts are lit by the original warehouse windows, which make Elisabeth's space amazingly sunny. Her small loft looks out onto the lawns of the neighbouring new townhouses; beyond, there will eventually be a park, though right now it's a muddy mess of old railway junk and half-dug planting holes. Elisabeth didn't want to stare at the brick wall of a townhouse - one problem with some of the west-facing lofts. 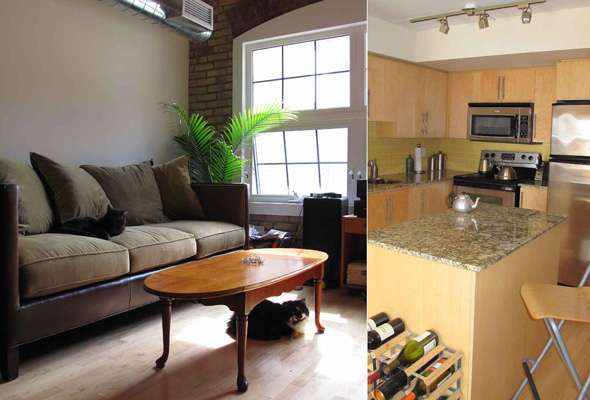 "We counted windows on the plan, to make sure we weren't buying into a wall." Overall, she's delighted with the move. "There were two very dusty months, after we first got here. But we've got no complaints."

6 home questions:
What do you love most about your home? "It's so bright and airy. You walk in and breathe easier because of the light."

What drives you crazy? "The walls are really thin. Good thing we like the neighbours!"

What's your favourite place in your home? "That chair is my favourite spot in the house. It's my chair. John said, Just imagine yourself sitting there in the sun, doing a crossword puzzle. And I was sold. It's a great chair, one-and-a-half sizes."

What do you like best about the neighbourhood? "There are young families as well as people without families. There are renters, in the townhouses especially. It's so different from the Bloor West Village where we were living before, where the families were older, more established. This is fantastic. It's energetic."

What's most surprising about this home? "We didn't expect this but we found out that the townhouses...have families, so every morning, on the way to school, the kids play." She points out her windows at the lawns and pathway. "It was really fun in the snow. Because we didn't know what to expect, the community is surprising."

If your home were a kind of fruit, what would it be? "A clementine, because they come in baskets; they're a communal fruit. Plus there's that affiliation with Christmas and all things cosy."