Back in September I posted about a web site called MyCityToronto. Its design was something of a shock to the senses and the publisher seemed to be making claims about their web traffic and customer base that couldn't be substantiated. I was skeptical and so were readers of this site if the 47 comments that followed were any indication.

Now, seven months later, signs point to MyCityToronto being less than what is was touted to be. An ex-employee is littering message boards with complaints about the founder and company's business practices. On complaintsboard.com, poster J Denaro (apparently the former Executive Director of International Development for the site) starts his entry by stating "This company is built and carrying business on a fantasy of lies."

Other claims he makes include :

* "The entire client base you see on this web site, with the exception of a couple of dozen or more recent ones we brought on board, are not paying customers."

* "The people that they brought on board to work were made promises of salaries, shares, free licensing, bonuses etc... And a very high level commissions structure for sales. None of them ever got paid or received any of the promises made to them."

* "The overhead expenses and billboards were covered by his uncle and cousin who own the building where there office was..."

On another web site, ripoffreport.com, Denaro posts again, this time adding comments like:

* "They didn't have the paperwork to back their claims in order to approach any financial institutions and I tried to explain to them that without the revenues to repay lenders no one would even look at them."

* "Nick Giannantonio their VP at the time assured me that there would be at least 180 advertising clients on the web site that we would be able to renew without problems because they were on auto renewal....It didn't take long before we started to realize that the so called clients on the system, when contacted did not ever recall booking an ad with MyCityToronto.com"

* "Some Clients on the MyCityVaughan.com site had paid for their ads but were very unhappy....A few of these clients literally told us where to go and a couple described their experience with the previous salesman for MyCity Designs as someone who took their money and ran."

* "Nobody has since Christmas been paid by neither MyCity Inc. nor have they complied with any of the normal employer practices required with employees....They conveniently shut down their offices at 557 Dixon Rd. in Toronto at Christmas when no one would notice. But their web site info still shows that address as their head office with their sign still up at that location."

And, finally, on My3Cents.com, Denaro is back again with more revelations including:

* "They play to be this huge corporation, but sorry to tell you that it is only a one man show. The webmaster hides in a basement where he creates the graphics to portray a company that is so big and claims to be never endlessly optimizing his network of MyCity domains and 130,000 plus pages."

For those not keeping tabs, the site has been running radio ads on a number of local media properties. According to J Denaro:

* "They have managed to take for fools all those so called media partners by first convincing and selling them on a brilliant co-op program that will bring huge revenues to them from their client base, that would allow all MyCity Inc. advertisers to share the Radio air time, News Paper ad space, Billboards, TV commercials etc..."

And who are these "fools"? Here's a list of media partners according to the MyCityToronto web site: 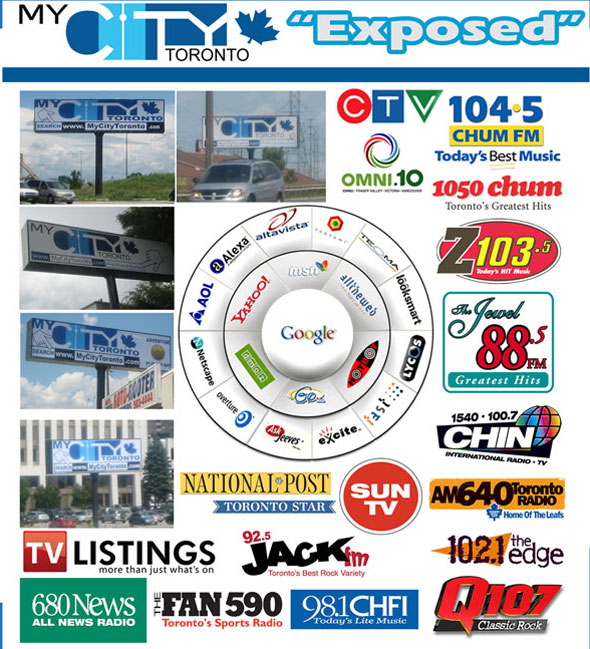 As of now the site is still up and looks to be business as usual. They're even promoting something they call S.M.A.R.T. applications which means I should be expecting MyCityToronto to be showing up in a taxi, on a touch screen table top or a kiosk near me. Can't wait.