At the base of Bathurst street, marking the western limit of Toronto's shoreline proper sits an odd conundrum - one of the last remaining sets of industrial silos in Toronto - The abandoned Canada Malting Company Plant.

Sister to the Victory Soy Mill silos (the remaining structure in plain sight from the Gardener on Toronto's eastern shore), these massive grain elevators were erected in 1928 to store malt hops, with further additions to the preliminary (slightly shorter) silos in the mid 1940s. Before its construction, Toronto had not seen grain silos in years, due to the explosive and unstable nature of grain dust, and the (then) wooden construction of the grain elevators, which did not last more than a decade or so. The new 'modern style' of the Malting Plant, with its 'form following function' motif made it quite an impressive addition to the Toronto skyline, even until its closure in the 1980s. What is most special about this building, however, is not its history, but its current state and statement against what lies all around it. 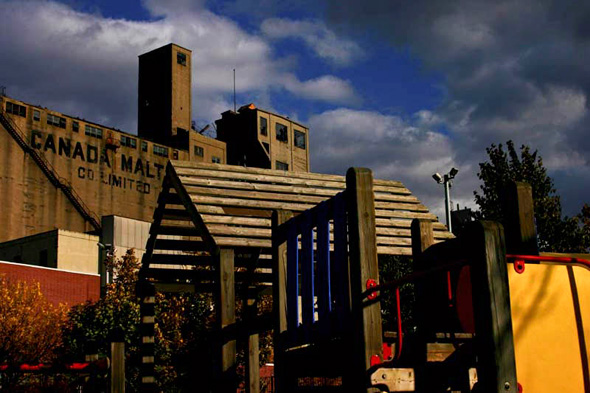 Viewing these decaying silos, with their tall, oddly shaped offices of shattered glass and crumbling metal and concrete, we get a sense initially that they are part of some bygone era, so distant and obsolete as to be relegated to images of sped-up soot-covered workers in black and white, feverishly shoveling god knows what onto endless conveyor belts, an ACME logo prominent in back, and a plump, fat-cat foremen at front, cracking his whip. We consider ourselves quite 'modern' as a city, but don't realize that edifices such as the Malt plant are actually perfect examples of 'modernism'; architecturally, what we consider 'new' in our society is quite often 'postmodern' architecture (think: OCAD's tabletop, the ROM's crystal) - 'postmodern' being an odd 'anti-name' for a period, as it says that the modern imagination is merely 'after' something.

The reason we often neglect structures such as this as part of our 'city milieu' is that living in a large urban centre such as Toronto, we are used to low-rise service sector architecture as 'industry', forgetting that we still rely heavily on silos, grain elevators, and many manners of 'smoke-stacked' buildings which seem so out of place in a city which strives for the eco-friendly, clean-air metropolis we are told to imagine.

Since the Malting Company building was titled as a Heritage site, a group called 'Metronome' stepped in, wishing to turn the 'unsightly' silos into a contemporary Music Museum - a plan which has yet to yield any progress. This is not to say that it, or a similar project will not eventually ensue, for as we saw with the old Distillery District, and are now seeing with the Don Valley BrickWorks factory, given the right attention, transformation is not impossible (unfortunately however, this often results in a more bark-than-bite excuse for 'fusion architecture').

So, what is the architectural excuse for the presence of the Malt (and buildings like it, for that matter)? I propose a reverse-Malthusian example of time versus technology, when it comes to architecture: Time moves along at an arithmetic rate, whereas technology moves somewhat more geometrically, and the result? We have to fit newer and newer technologies into buildings which do not progress as rapidly, with the result of derelict structures in plain sight, even if they are perfect models of 'modernism', now outdated.

In order to make use of these buildings to the modern urban imagination, then, we need to approach them somewhat tangentially; take a stroll down by the old Malting Silos when you have a chance - really take a look at the old structure, and you begin to see a new kind of beauty emerge. The city recently set up an Irish Potato Famine parkette just beside it, almost hidden away by the concrete and metal behemoth. Walk out back and realize that although it resembles a huge ship from afar (observe the obtuse upper-tower), it is actually an incredibly narrow structure, with huge metal arms reaching out over the water on its eastern side. Observe its many catwalks, the infamous western 'stairway to heaven' on the silo's side, just below the enormous company font, and looking up to the Plant's highest point, imagine one of the most unique and beautiful views of the city Toronto has to offer.

Here's a slide show of some of the snaps I took at this intriguing building: