How Do You Get a Car For a Loonie?

Its premise is simple: Drive around the city at least 30 kilometers a day in a car plastered with advertising, which heavily subsidizes the cost of the rental.

I took a test drive with Andreas Kotal, President and CEO of CityFlitz (pictured above with his head poking out of the sunroof of a MINI Clubmans) as we chatted about his new venture.

"It's most exciting today to see this idea taking off," said Kotal, a Toronto resident and graduate of York University's Schulich School of Business MBA program. "Inspiration came from a similar business model that was developed five years ago in Vienna, Austria, developed by former Formula One driver Niki Lauda. They now have a fleet of over 600 cars."

For less than the price of a TTC fare, members of CityFlitz can rent for a day a MINI Cooper, MINI Cooper Clubmans or a Smart car wrapped with in an advertisement from one of its clients. Yahoo! Canada is the first main partner.

"We took this basic advertising model and based it around a rental model like the car-sharing companies in North America," said Kotal. "We gave Yahoo! maximum flexibility for their design. I find it very eye-catching. They look very sexy."

While opinions on the new ad-plastered Minis may differ for consumers, the idea is already a hit.

Barb King from Nova Scotia (above left) signs up for CityFlitz's new auto-sharing service in the GTA. "I think it's a fantastic idea," says King, who lived in Toronto for 30 years. "The advertising doesn't bother me."

CityFlitzers, as Kotal likes to call them, will be able to pick up their rental cars at parking lots conveniently located around the city nearby subway stations. "You'd be able to choose a location on a map and have 24/7 access to pick up your car," says Kotal.

While this idea sounds really cool, it's does have its drawbacks. Like becoming a mobile billboard, for one. Since each CityFlitz car in the fleet has a built-in GPS tracking system, this enables advertisers to have real-time information about the use of the car.

Aside from the 30 km minimum use per day, CityFlitz members are allowed unlimited mileage within the city after that. And CityFlitzers are responsible for topping up the gas upon completion of the rental.

A pleasant perk is the addition of Wi-Fi high speed internet. Which would be great for longer trips with bored passengers. But this may come in handy for iPhone users as well. And anyone with a laptop who gets lost and needs to quickly look up Google Maps. Or if you're a bored blogger stuck in gridlocked traffic. 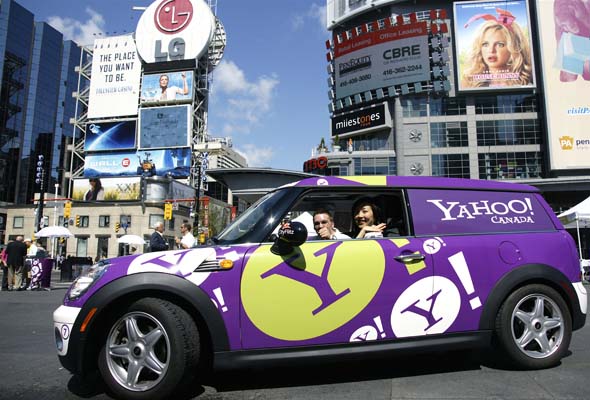 One passerby at Yonge-Dundas Square thought told me he thought this idea should've been around 20 years ago. "It benefits the environment, the consumer and the manufacturer," said Anders Cullin, 32. "It's so much more accessible, appealing and practical."

There's a total of 13 Mini Clubmans plastered with Yahoo! Canada to rent from CityFlitz over the next 12 months. An additional three Mini Coopers with advertising partners 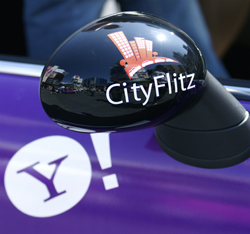 CityFlitz plans to accommodate all other major cities in Canada soon, starting with Vancouver and then Montreal.

To rent a car, CityFlitz members must be at least 23 years old and have a valid "G" driver's license as well as a credit card that includes rental car insurance coverage.

Members will pay a one time fully-refundable security deposit of $350 and a a one time $30 administrative processing fee. Other than that, there's a $7 monthly usage fee.

You can preregister for updates on the program at their website. You'll be able to sign up for a rental as of Monday, August 25.

"We've already had 300 people sign up since last Thursday when we kicked off our radio campaign," says Kotal. "The list is growing. Every 10 minutes someone else signs up. We want to give as many people the opportunity to drive one of our cars, so customers will be limited to a two-day rental in September. Come October, they will be able to rent our cars for a week at a time."

How does this formerly two-horse race stack up against Zipcar and AutoShare? Perhaps those of you who have tried these auto-share companies can comment on your experiences. Would you be amenable to join CityFlitz?