Do TTC drivers often leave their vehicles and passengers to go and get something to eat? For about four minutes my 505 streetcar sat on Dundas West, blocking all westbound traffic, as the driver got out to get take-away food from Ali Baba's. I've seen a TTC bus driver park at a stop for an extra few seconds to run in and grab a cup of coffee on a cold day and I'm okay with that, but what I saw last night was ridiculous.

I was on the streetcar at around 6:50pm. The streetcar stopped at the light before Roncesvalles, just around the corner from Dundas West station. I was in conversation with my girlfriend, and so didn't notice exactly what was going on, but before long, I could tell we seemed to be stopped for much longer than usual.

I looked up a couple times, and though the light was green and there wasn't a vehicle ahead of us on the road, we still weren't moving. I assumed there were pedestrians I couldn't see or a car parallel parking really slowly. I wasn't surprised when I started hearing honking from behind us, but it was only then that I realized we no longer had a driver.

I walked to the front of the streetcar to see if he was perhaps dealing with an incident, but he wasn't anywhere near the streetcar. I turned around to ask a few people seated at the front where he was, and a lady pointed to 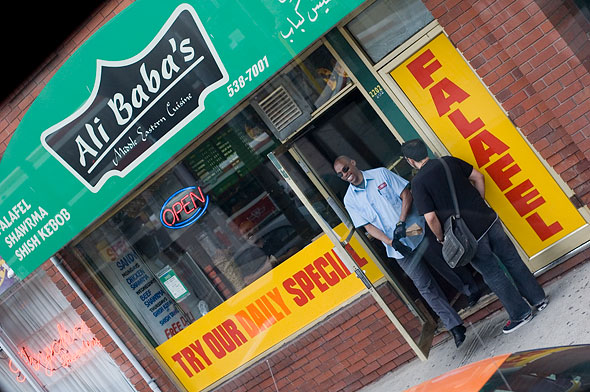 Ali Baba's. He was inside, talking with the people behind the counter as they finished his take-out food (I couldn't tell what he ordered but it looked falafel-y). Everyone inside the restaurant seemed to be having a really nice time and everyone looked really friendly and I told myself I really should eat there sometime. I returned to my seat and waited, with camera.
A full frame photo from my seat in the streetcar of our streetcar driver walking out of Ali Babba's with his food. Notice the taxi (it was parked) in the bottom corner of the frame and completely blocking all traffic westbound on Dundas. Also notice how happy the driver is. Isn't that nice.

It was only then that I realized there was a taxi parked in the right lane, so our drivers little visit to grab something to eat effectively blocked traffic on Dundas Street West during a still really busy time of day. The dozens and dozens of vehicles that had been trapped behind were none too pleased and a few flipped the bird as they sped past when we finally started moving again.

Naturally, no one on the streetcar said anything. This is Toronto after all, we are all too polite.

Apparently this is common? Is this okay?

Maybe I'm missing something. Despite having one of the strongest unions in the country, are drivers not given ample breaks for eating meals, forcing them to scramble for food when their bosses are not watching? Is that's what's going on?

I don't like slagging the TTC. I know it's far from perfect, but it gets me where I want to go and I for the vast majority of the time have a pleasant experience riding our transit system. I have, however, lost a little sympathy this evening when a driver could be so inconsiderate and selfish.

It's important to note that I do meet a lot of great drivers. The other day I was driving my car when I saw a TTC bus wait an extra thirty seconds for an elderly woman to cross the street and get to the bus. I find many drivers really helpful when I have questions about best routes or travel strategies. It's really a shame that there has to be some bad apples in the bunch.