Bike thieves in Toronto beware: The police are on your trail.

As Sun Media reported this morning, Igor Kenk, who owns the infamous Bicycle Clinic on Queen St. W. and Strachan Ave. was arrested last night by plainclothes police officers after they allege to have caught him in the act.

Since almost 5,000 bikes have been reported stolen this year alone in Toronto, it's a relief to hear that the police are finally doing something constructive to combat this ongoing problem.

Just about everyone I know who rides a bike in Toronto has had one ripped off. I once had my bike seat and post stolen even after having it bolted.

Aside from offering these tips and providing a bicycle registration program, Toronto cops have largely turned a blind eye to this ongoing problem in our city.

What's your experience with Igor's Bicycle Clinic? Do you think this arrest will do much to lower the bike theft rate in our city? Will it deter other bicycle thieves in Toronto? 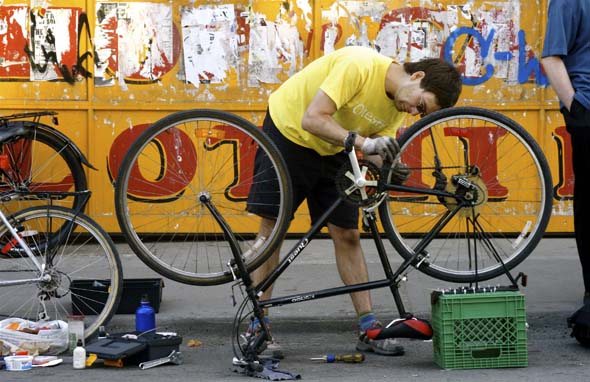 If you need an alternative to Igor's Bicycle Clinic, perhaps consider visiting one of the Best Bike Stores in Toronto. Or consider one of the Toronto Bike mobile ride and clinics organized by Dan Teleki (pictured above) at various locations around Toronto.

Ever had your bike stolen in Toronto? Got some tips on how to stop bicycle thieves in Toronto?

Update (Friday afternoon): Police have recovered 150 supposedly stolen bikes from inside Igor's shop and are having an open house Saturday and Sunday from 10 a.m. to 6 p.m. Come see if your bike is among the recovered rides at the public viewing at Central Garage, 9 Hanna Street.