The Toronto Cyclists Union has been around for a few months now, quietly gaining momentum, volunteers, clout and starting in July, they'll offer a tri-annual magazine for Toronto cyclists named Dandyhorse.

Last September, urban visionary Dave Meslin put out a call for volunteers, and over 70 bicycle advocates gathered to participate in the conception of Dandyhorse. Nine months of gestation have now passed, and Meslin and his crew are ready to release their first edition.

The full-colour 48-page publication will be available, for free, in bike shops across the city. They'll also hand out the magazine at various Bike Month events planned by the city, as well as events organised by Toronto's other cycling groups, like the Toronto Coalition for Active Transportation (TCAT), Advocacy for Respect for Cyclists (ARC) and the Take the Tooker folks.

You may remember voting for your favourite name for this rag back in February, over at Spacing.ca. While Dandyhorse wasn't the most popular suggestion ("Ring & Post", "Spoke & Word", "Kickstand" and "Joyride" were some of the other options), editor Tammy Thorne admits that "Dandyhorse" was the preferred name by those organising it. Plus, "Dandyhorse" is the name I voted for (which is all that really matters, right?) 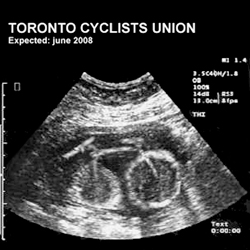 "This is going to be an arts and culture magazine as well as a serious cycling magazine," says Thorne. "In the first issue we've got something for everybody: BMXing, mountain biking, competitive cycling, couriers, and moms, dads and kids."

Toronto's first membership-driven bicycle advocacy group also has quite the Facebook presence. Ultrasound - the TCU's Facebook identity - currently requires two groups in order to reach all of their members (there are 905 people in one group, and 475 in the second, so join the second group). The Ultrasound groups are used to notify members of the progress of Dandyhorse, to announce events (like the showing of Pee-Wee's Big Adventure - supported by a live cast of local indie music icons) and to make getting involved with the TCU as easy as possible.

And since cycling is all about preserving the environment (and staying healthy), Dandyhorse will strive to make as small a footprint (err, tire tread) as possible. The magazine will be printed on Cascades Roland Enviro100 non-bleached, 100% post-consumer waste paper. It will be printed by Toronto-based Warren's Waterless Printing, which is powered by carbon-free Bullfrog Power.

For a sneak peak at the prototype cover, and to read more about this fledgling publication, check out the media package .PDF.