On June 30th, Michael Coren might have annihilated what little credibility he may have had as a journalist when he went on an all out bashing of Toronto's famed Gay Pride events. His recent editorial makes assumptions without offering evidence, cites statistics without citing the source of said stats, and claims that Torontonians are "empty headed" for "taking vulnerable and powerless little children to Gay Pride."

And you thought bloggers were the only ones who never checked their facts (kiddin'!). An editorial response lies in wait after the jump, and some of you might consider some things seen and said to be NSFW.

--
Consider this an editorial response to Coren's editorial. Considering our own Adam Schwabe dubbed me an "honorary" queer on Facecrack recently, perhaps I'm taking Coren's stab at Pride a little personally. But when a print journalist makes such sweeping statements about those who support the GLBT community, it's hard not to.

Coren's main beef stems from what he calls "the million myth." He says, and quite frankly he's likely accurate, that it's impossible for there to have been one million people watching the Pride Parade. What he fails to realize is that Toronto's Pride festivities do not solely consist of the Sunday parade, and that the large number is meant to encompass all of the Pride Toronto related events.

Incidentally, two square feet of space might be the average amount of space taken by a human... when elbow room is given to him. Was Coren even at the parade? It was so packed to the gills like a Metallica moshpit (circa early 90s of course) that people had to stand on various structures just to see it.

He then says it's "wonderfully fitting" that religious and conservative assemblies attract a bigger crowd. That statement doesn't exactly scream of love for the GLBT community.

Immediately following this statement he decries "gay leaders" for touting that 10% of all people identify as gay/bi, stating that the actual number is between 2-4%. According to whom, Mike?

We're only halfway through his article, believe it or not. At this point he had yet to deem public nudity "abusive" to children. Nudity is hardly abusive, not even when people are wearing buttless leather chaps or if they're flailing their breasts while wearing pasties. The Pride Parade's atmosphere was entirely celebratory, and for good reason; equality to all regardless of what's under your clothes or what your particular kinks might be is not only a right, it's something that should not inspire shame in anyone. The sooner kids are exposed, so to speak, to the many facets of sex and its surrounding culture, the less likely they'll become stiff as a board sexual conservatives who think the missionary position with (gasp!) the lights on is something freaky deaky.

By the way, you gotta love it when someone claims that people who are "semi-naked" and "simulating sexual activity" is a "bizarre form of titillation." I have my doubts that Coren is asexual so I'll go out on a limb and say that Coren is likely titillated by this picture of Naked News anchor Erica Stevens. 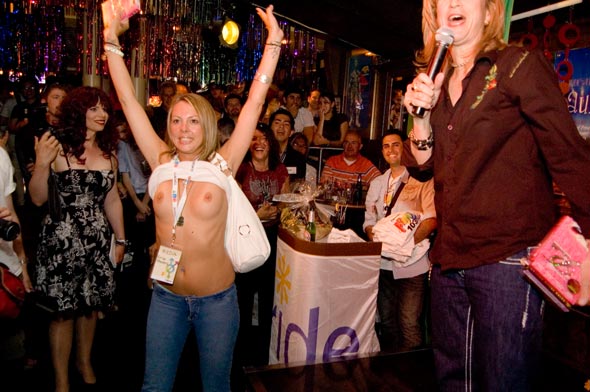 All in all, Coren, who writes for The Sun, Catholic Insight, and also has a show on the heavy-on-the-preaching CTS network, has written an editorial that reeks of homophobia. Ending his editorial with "gay men and women deserve respect and dignity," it's fistingly hilarious that he has absolutely none for the GLBT community himself. Even John Tory had the nads to show some respect for the community when he showed up at the Pride Gala, though I'm sure a chance to rub up to Pride Toronto's executive director and "renowned hottie" Fatima Amarshi had nothing to do with it.