The TTC is in the midst of fitting network buses and streetcars with an automated system that calls out stops, but until that's completed should drivers be calling out the stops? Blind lawyer Lepofsky is still fighting the fight, and the TTC is still saying that the methods they employ are sufficient.

Beware of mother ducks downtown. It's egg laying season, and many ducks choose to lay their eggs (and protect them) in the oddest of urban places like concrete planters in front of highrise buildings.

A kid bites another kid at a daycare, requires medical attention, and the daycare center gets shut down because it has far more clients than the law allows without a license. The government is clearly trying to protect the wellbeing of children, but the parents are furious because they like their caregiver and have no other options due to shortages of spaces in licensed facilities.

Students at a Scarborough school did a great deed for the environment by collecting over 12,000 dead batteries that may have otherwise ended up in landfill. But when they called the city to pick them up, they were told that because the location isn't residential, the city wouldn't dispose of them. Once the media picked up the story, action resulted. 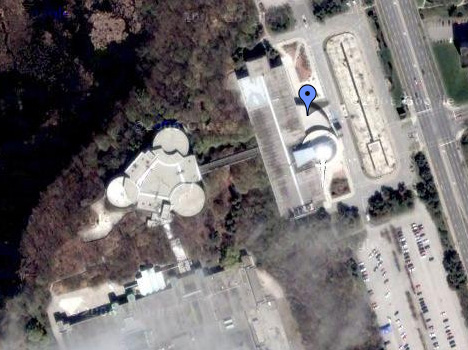 Recognize this part of the city? Post your answer in the comments (and make your eyes go out of focus so you don't accidentally see the answer in a previous comment). Check for the answer in Monday's blogTO Morning Brew.