The god of Niagara. The god of the St. Lawrence. The god of Lake Ontario. These names probably don't come up very often in theology discussions, but they are gods that were once considered important enough to grace the walls of Toronto's first important civic centre, St. Lawrence Hall. Like the gatekeepers to a different time, the gods on St. Lawrence Hall still cast their stony gaze on King Street East, watching a world very different from the one into which they were born.

Given the importance of Lake Ontario, Niagara, and the St. Lawrence River in Toronto and Canada's history, it shouldn't surprise that architect William Thomas chose to sculpt three water deities over the archways of the 1850 building. But what I like about the sculptures is that they represent "Canadian gods," and not of the over-hyped musician or citizenship-renouncing-press-lord variety, either. They might not have the reputation or mythology of the ancient Greek gods, but a Canadian god is a still a Canadian god. 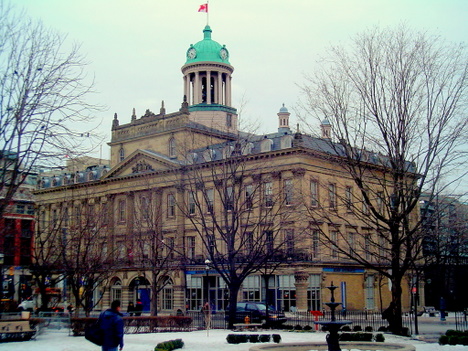 On the far left is the god of Niagara, whose stern face hints at the strength and power of the falls from which his name is derived. On the far right is the god of Lake Ontario, whose features are calmer reflection of the god on the left. In the middle is the god of the St. Lawrence, who maintains a perpetual state of weeping.

In the excellent Faces on Places: A Grotesque Tour of Toronto, author Terry Murray laments that no sculptural faces grace new buildings in the city, including those where it would seem most obvious: cultural centres like the ROM and the AGO. Still, a stroll through the city's older neighbourhoods yields more than a few examples of this seemingly-forgotten architectural decoration. Hovering just above our eyesight, they are as parenthetical as the history we sometimes take for granted.