The Undertow: "The Avenue"

Last week I finished a long day by attending a lecture at Hart House entitled "Whatever Happened to Old Toronto?" Although I was disappointed that author Michael Redhill was unable to attend, the remaining panel of Barry Callaghan, Sally Gibson, and John Lorinc offered more than enough fodder about Toronto's rich history to keep the crowd interested.

Musing about the city's collective amnesia, Callaghan complained about the lack of imagination in Toronto's street names. He wondered why more streets couldn't be named after prominent Torontonians of the past, reminding us of the people and moments in history that helped shape the city. Callaghan singled out Avenue Road as an example of this compromise for mediocrity: "Let's call it 'Avenue' . . . No! Let's call it 'Road!' Why don't we call it 'Avenue Road?' " he joked to the chuckling crowd. 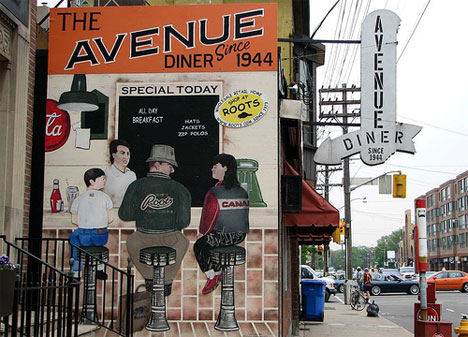 As he joked about the street's name, I remembered I'd read something that suggested it does actually pay homage to Toronto's history. I can't remember where I read it, but the story made enough of an impression on me that I stored it in my mind, just in case I needed to impress a girl or schmooze my way into elite social company.

Likely to the confusion of many a tourist, Avenue Road is Queen's Park is University Avenue, and although we now think of all three stretches as the same street, they weren't born that way. According to Toronto Street Names, when the University of Toronto (then called King's College) was founded in 1827, it was decided that the future university would need a "stately" entrance.

Gates were put up on present-day College and Queen Streets, and the street we now call University Avenue became a public promenade where commercial traffic was turned away. The street consisted of two roadways divided by a median: the western road was called College Avenue and the eastern was called Park Lane, but in most history books and stories the strip is referred to as College Avenue.

The city's growth forced the fences to come down and the traffic was let back in around 1859, but by then the street had earned the nickname "The Avenue." When present day College Street was so-named, College Avenue was renamed University Avenue, and both the name and the promenade of street had disappeared. Still, it makes the name Avenue Road seem less like a "boring compromise" than a tribute to the public park that had made its way into the imaginations of a generation of Torontonians.

First image by me, second by viviloob of the blogTO Flickr pool.