Jews Obligated to Drink on Purim -- Be 'Polite' and Join 'Em

If you want the square Wikiality of where the Purim mayhem comes from, this Web monkey's favourite 'pedia defines the holiday by its "public recitation of the Book of Esther, giving mutual gifts of food and drink, giving charity to the poor, and a celebratory meal (Esther 9:22); other customs include drinking alcohol, wearing of masks and costumes, and public celebration."

Other customs? Let's be honest, bubulah. The many l'chaims said over booze, with the intention, nay, the obligation to become so sloshed we can't tell the difference between the good and bad guys in the Esther story is the reason many Jews have popularized the holiday enough that non-Jews have heard of Purim for years (and not, say, that holiday in autumn with the open-roof huts). The ridiculous costumes help, but who's riffing on other Jewish holidays like For Your Consideration did with Home For Purim? Any-oy, find out where to get your freilich on after the jump.

The master list has everything from Purim at Casino Royale (sponsored by Beth Tikvah) to the clown show, masquerade and "magical world of circus and ore" sponsored by Thornhill's Jewish Russian Community Center. Here, though, are a few key events those listings didn't include.

Downtown revelers have a few Saturday night options: Go shmancy at the Miles Nadal JCC with finger food, live music and dancing; drink yo' Gin and Jews at the U of T Hillel affair (bring canned good donations and your best costume to vie for an iPod); or check out Annex Shul's first-ever Purim bash at Empire (50 Cumberland), a fundraiser for Jewish humanitarian relief non-profit Ve'ahavta. (Facebook link requires registration.)

Kulanu ("all of us"[ed: todah, Disparishun]), a Toronto Jewish LGBTQ social group (student-affiliated, but not exclusively), presents The Jew Who Loved Me at El Convento Rico on Thursday March 8. 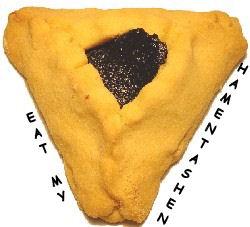 And, although not billed as a Purim party per se, those who dare can always try Shlomo and Aurora's Saturday night event at Wicked, this time with an Arabian Nights theme and DJs Trevor and Kenny Glasgow on the decks. A kosher good time? Who knows. (Previous Wicked coverage here.) Unless folks like locally run Jewish Mayhem Magazine crew throws a devious affair, Toronto's local naughty Yidden may have to make the trek to places like NYC to taste those hamantaschen.