The Undertow: The Hart House Pyramids

During my days as an undergrad at the University of Toronto I spent a lot of time at Hart House. The university might get criticized for a lot of things, but it definitely doesn't lack inspiring spots to relax or study, and few buildings on its campus are as aesthetically pleasing (or as conducive to kick-starting the imagination) as Hart House. The building always suggested so much mystery: I often imagined secret passages winding between the walls or ghosts stumbling awkwardly through cavernous halls at night. During Nuit Blanche one of my favourite installations featured a mind-bending video projected on the wall of the pool in the basement, complete with ominous soundtrack and mood-setting candlelight. Since you had to travel through the bowels of the building through the narrow tunnel leading to the pool it felt like one of the most site-appropriate installations in the city. But perhaps the largest Hart House mystery that stuck with me during my time at the school wasn't inside the building, but in front of it.

In front of Hart House, on the eastern side, are four equally-spaced white pyramids. They look like the skeletons of unfinished tents or the bottoms of half-assembled arachnid robots. Sometimes I'd see people enjoying a picnic underneath them or trying to swing off the lower ones, but I was pretty sure that wasn't what they were made for. 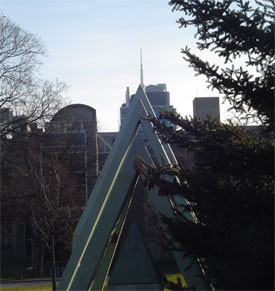 It turns out the pyramids are a 1984 art installation by Toronto artist James Gillespie called "Sight Line," and they're meant to be viewed from the northern end, facing south. If you align yourself with the shortest pole so that the tips of each line up you'll see that they point towards the tip of the CN Tower. Before the construction of the Terrence Donnelly Centre the pyramids pointed perfectly towards the main pod of the tower, but it was probably inevitable that a huge building would go up one day and nullify the effect . . . at least it was one of the university's own buildings that did it. As you can see from the picture, the tip of the tower still rises above the new building, and it'll probably be a while before they build something tall enough to block out that particular view.

Images by me, fortunately one day before winter finally arrived.