The Walton is a charming cafe and cocktail bar across from the Royal Cinema in Little Italy . Formerly the worn and dingy martini bar Wild Indigo, it's been transformed into a spot that catches the eye of those who pass by; as I witness first hand on my visit, quite a few people can't resist a closer peek at this lovely addition to the neighbourhood.

That's understandable, as the place makes me feel like I've been transported to a cafe or wine bar in Paris. The interior looks classic yet cozy, with a similar vibe to The Gabardine in the Financial District, which makes sense because owners Alison MacKenna and her husband Sunny Yoanidis were part of the team behind it. 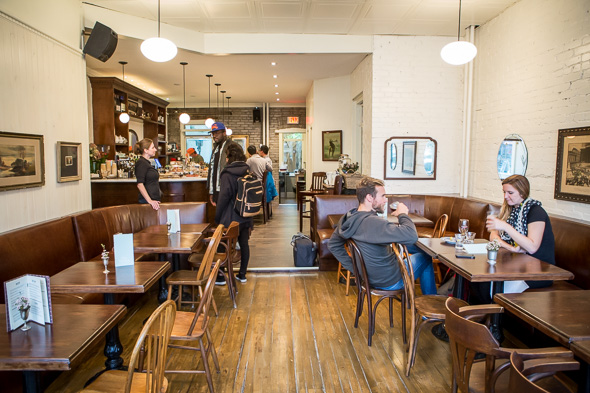 MacKenna sold her share of that restaurant, came upon this space (they live five minutes away) and embarked on this new project, including a big DIY renovation. The result is something that feels like it's been here longer than it actually has, with cream-coloured walls, a marble countertop at the bar and wood floors and furniture.

A gorgeous back patio with a Jurassic Park -like high fence and outdoor heaters seats 35 (a small front patio to come later will fit five) while the capacity inside is 30.

There isn't even a hint of pretension here; just warm, friendly service down to the smallest details, like a pile of winter blankets rolled up at the front for guests coming in from the cold. 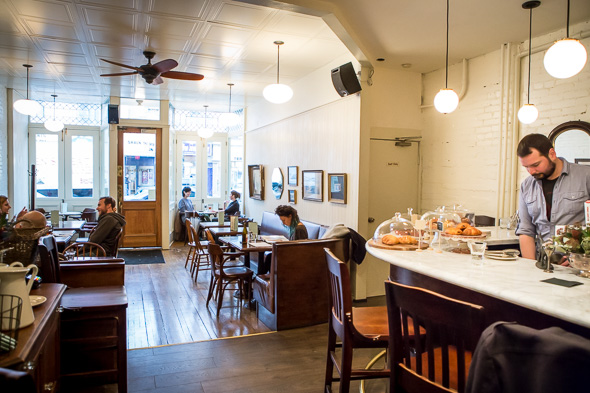 During the day, this is an ideal hangout for pursuits like reading or studying (WiFi is available). Espresso-based beverages using beans from Rufino Classic Gourmet are made on a small Elektra espresso machine (espresso, $2.50; Americano, $3; cappuccino, $3.75; latte, $4) and organic teas ($3) are from Numi. 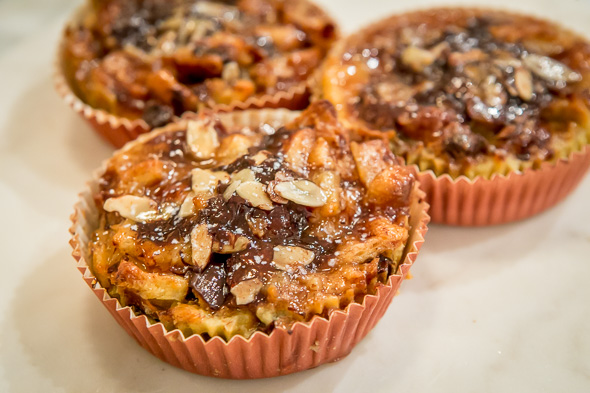 Irresistible-looking pastries, ranging from all sorts of croissants ($3-$3.75) to scones ($4.25) and chocolate almond bread pudding ($4), come from The Tempered Room .

After 11am, those looking to imbibe have the option of six craft beers on tap ($6-$7/16oz pour) that include local brewers like Black Oak, Nickel Brook and Sweetgrass; bottles and cans ($6-$14) including Beau's, Bellwoods and Side Launch; or a selection of wines by the 5oz glass, Â˝ litre or bottle, spanning Ontario, the U.S. and Europe. 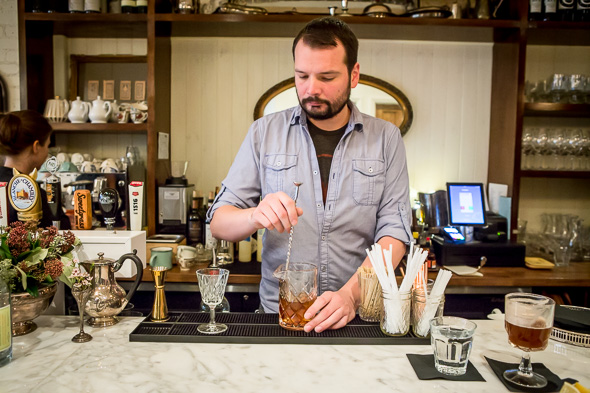 Of course, there are also cocktails, with many classics plus a couple of signatures. The Rosethorn ($14), created by Mr. Dints (aka Adam D'Intino of Dillon's Small Batch Distillers), contains Dillon's Rose Gin, Dillon's Unfiltered Gin 22, wormwood bitters and Cinzano sweet vermouth. After it's stirred and strained, dried rose petals are sprinkled over top. 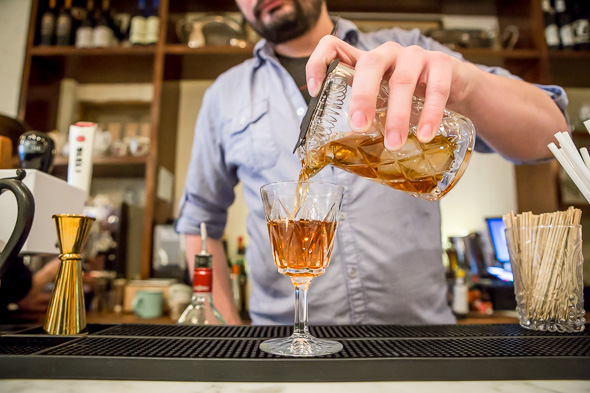 It's a boozy drink, but with well-balanced flavours.

Since they currently don't have much of a kitchen, most snacks are sourced from some of the best local establishments. Ontario and Quebec cheeses ($7 each) and charcuterie ($6-$13) come with Stasis Preserves and sourdough from Woodlot down the street. Pies ($12-$14) and sausage rolls ($9) from The Pie Commission are served with greens.

Much of the food and drink is served in lovely antique dishes with antique cutlery MacKenna has acquired from, as she tells me, "flea markets, with a hint of Kijiji."

The only bites that are made on the premises are the fisk - not a typo (it means "fish" in Swedish). MacKenna and Yoanidis's Scandinavian brother-in-law, Stefan Randstrom, a filmmaker by trade and originally from a coastal town on the southern tip of Finland, is recreating comfort food recipes he learned from his mother.

He cures and pickles everything himself in house and plans to change up the offerings every now and then. 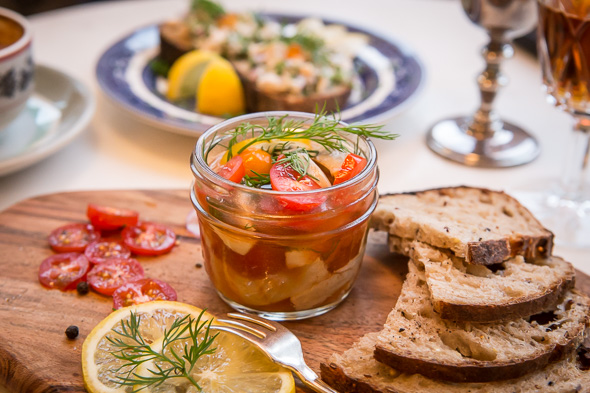 We try the spicy tomato pickled herring ($9), which comes with slices of Woodlot's sourdough. It's got some zing to it, although the chilis are subtle at first and grow spicier the more you eat it. 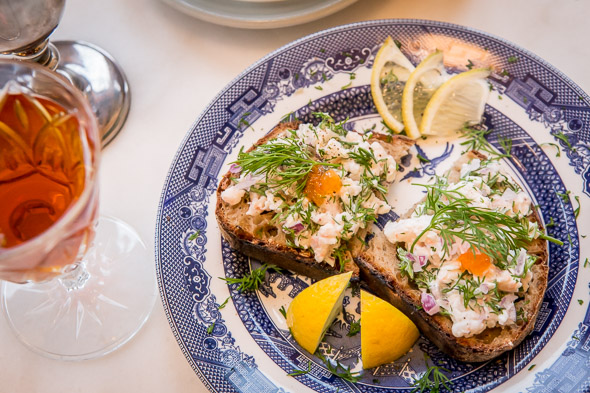 SkagenrĂśra ($8), a creamy shrimp salad that originated on the west coast of Sweden, comes in the form of an open-faced sandwich on Woodlot bread, and is topped with salmon roe and copious amounts of dill (not that this is a bad thing). It's definitely better than anything I've had at Ikea.

As for The Walton's name, MacKenna reveals it's named after a street in Halifax (she lived in that city for a time while growing up). They wanted something that sounded like a neighbourhood institution, which makes sense, because I think that's exactly what this place is going to become. 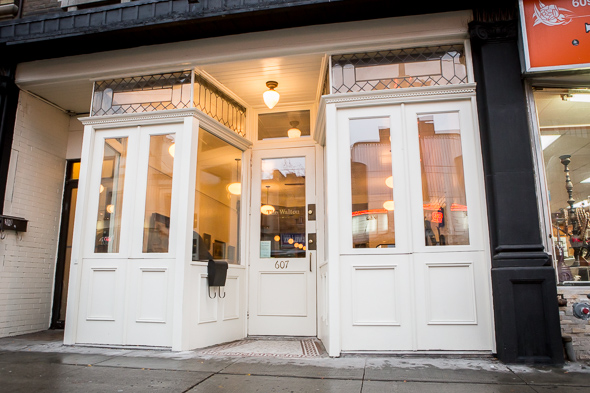