C House Lounge Cafe opened its doors in Yorkville just over two weeks ago, and it might be difficult to spot in its sub-level location, somewhat obscured by a pile of stacked chairs. It is many things (more on that later), including a cafe, but its opulent interior doesn't immediately belie this, or its established European pedigree. 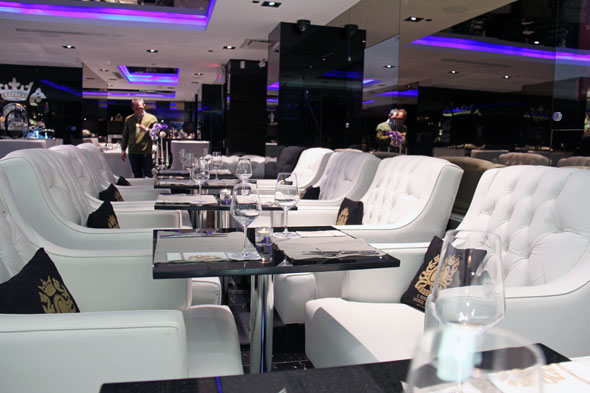 Upon entry, there's the "catwalk," a short, lit-from-beneath pathway that instantly spotlights you for other diners. There are rows upon rows of the same plush white leather throne chairs and couches, each accented by a black pillow bearing the C House insignia. 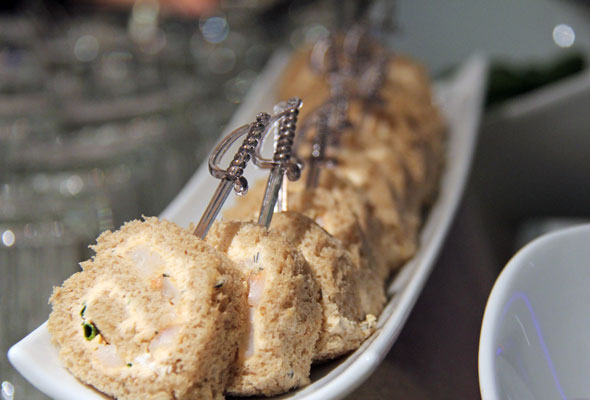 I sit down on one of the aforementioned white couches with executive manager Mauro Cirelli, who is tasked with ensuring the smooth opening of the various C House properties--the company itself is Italian, and based in Milan, but they have many properties throughout the world, and this is their first Canadian venture. Both the C House look and menu are fairly consistent across continents, but each location is tweaked and tailored slightly to its host city. 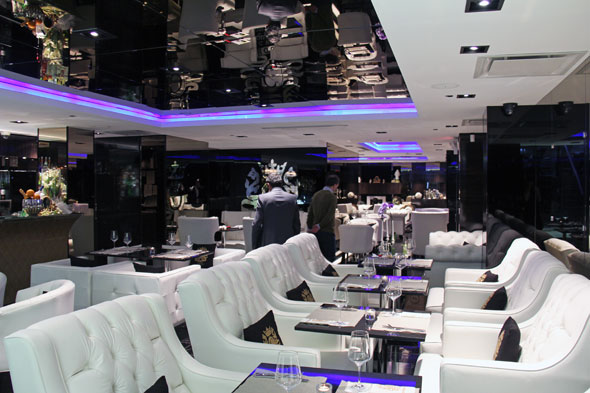 At first glance, it's not precisely my type of establishment. Although Cirelli notes how comfortable I am on the sofa (and it's certainly cozy), there's a small part of me that wishes it was rattier, a la Sweaty Betty's . The mirrored ceiling and restrained blue fluorescence lend it the aura of a club about the explode, and I almost expect a parade of short-skirted women to burst from the back room. 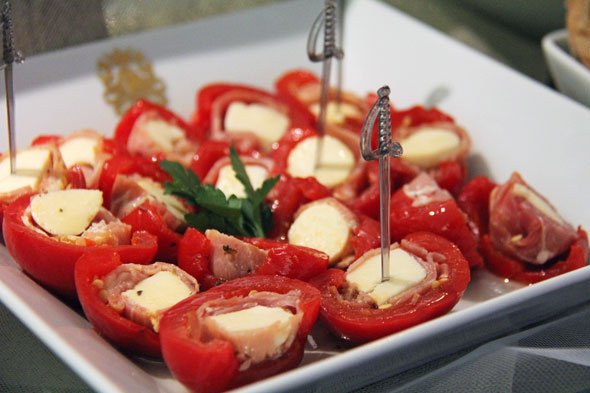 But my (admittedly ill-conceived) stereotypes turn out to be wrong. Early-evening patrons sit quietly in the back, enjoying C House's newly launched aperitivo program (between 5-8 p.m.), which showcases not only its extensive list of both staple and original cocktail recipes, but an impressive spread of complementary snacks. 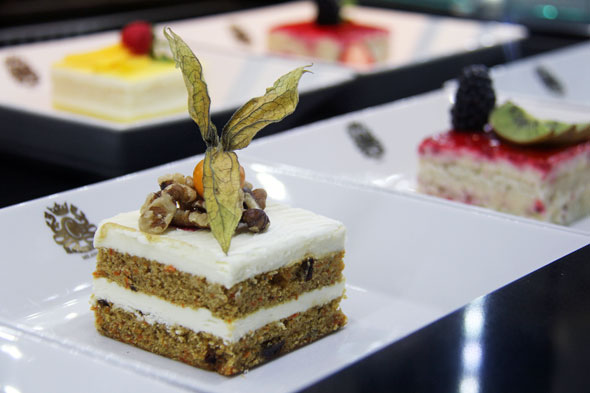 C House is a contradiction. They open at 9 a.m. in the morning to serve a European continental breakfast with items such as croissants, fruit plates ($8) and yogurt parfaits ($8), they have a wide selection of signature salads such as a caesar with organic chicken breast and shaved grana padano ($14) and beautiful open-faced sandwiches, as well as a selection of cake slices (all around $5) and fresh baked goods as well. They close around midnight on weekdays, and 2 a.m. on weekends. 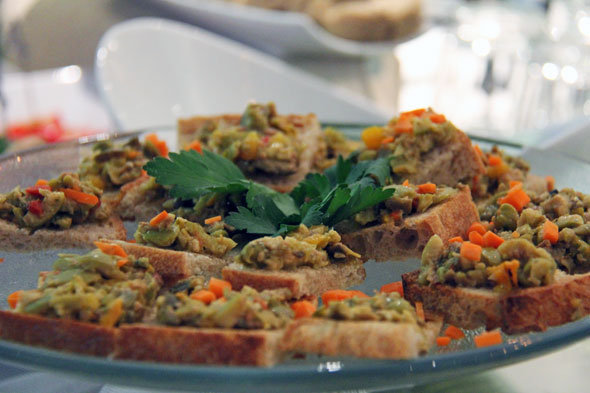 Their extensive list of coffees, iced coffee beverages, spiked hot coffees, and tea includes a white mocha made with white chocolate ($4.35), house-made hot chocolate ($4.25), and frappe caramel ($5.40). Their espresso is the brand's proprietary Italian blend, unavailable elsewhere or for wholesale purchase, and quite rich. My cappuccino is perfectly layered, not too bitter, and surprisingly sweet for only being coated in a fine layer of cocoa. 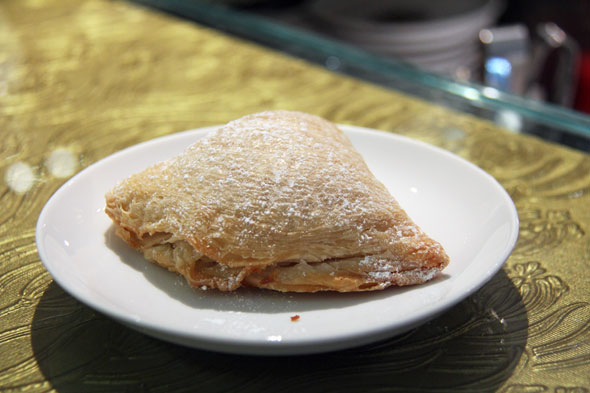 Having just overcome a summertime addiction to Dolce Gelato's sfogliatelle, I can't resist C House's ($3). It's, well, different. The phyllo seems slightly undercooked and the ricotta filling is not as dense as Dolce's, nor as sweet. It almost conjures up the taste of a well-crafted, but simple, vanilla pudding. 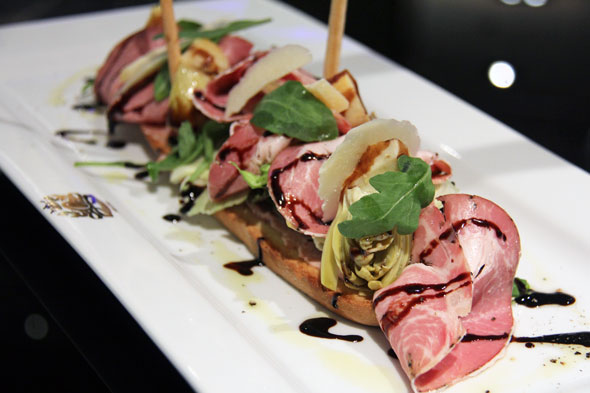 I also try one of their open-faced sandwiches (between $15 and $19), available for both lunch and dinner. My only complaint is the bread--delicious, but a bit too heavy on the crust, making it unwieldy to cut. Otherwise, the flavors of capiccolo, parmesan, artichokes, mortadella and balsamic oil are at once fresh and lush. 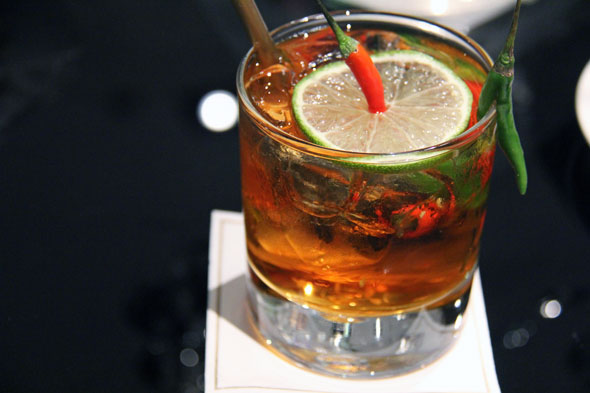 Then, there are the cocktails. They offer wine and spirits, but you'd honestly be amiss not to sample from Yuri the bartender's impressive arsenal. The chili mai tai ($14) is one of the most delicious cocktails I've tasted in recent memory. A (potentially excessive) love of spice is a necessary prerequisite, but you'll be well-rewarded by an expertly balanced blend of Bacardi Anejo White and Gold, and the infusion of, you guessed it, chili peppers. Hats off. They also offer non-alcoholic cocktails, and smoothies ($5.25).

C House follows two models: Yorkville's lounge setting, and an "express" format which is slated to open on Queen West by the end of the year, and will provide a more concise menu, better suited for take-away. There are also rumors of a third location in Shops at Don Mills. 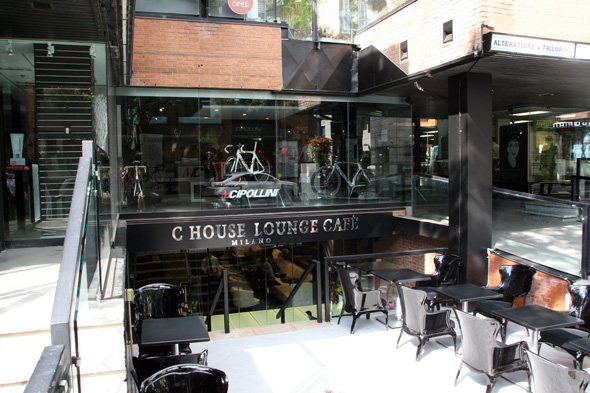 The cafe's menu is somewhat in flux at the moment, but stop in and enjoy an authentic Italian coffee, or splay across their couches with a drink and a nibble. You might even be convinced there's a sun-warmed piazza beyond the dim interior.