Barista Espresso Bar is located at 171 E Liberty St., behind the Liberty Market Building in Liberty Village . It's not much to look at from the outside, but once I walked in, I was greeted by one of the most immaculately maintained cafes I have ever seen. Polished white marble, carefully-placed tables and chairs, and a beautiful and bright Elektra espresso machine are the first things that caught my eye. 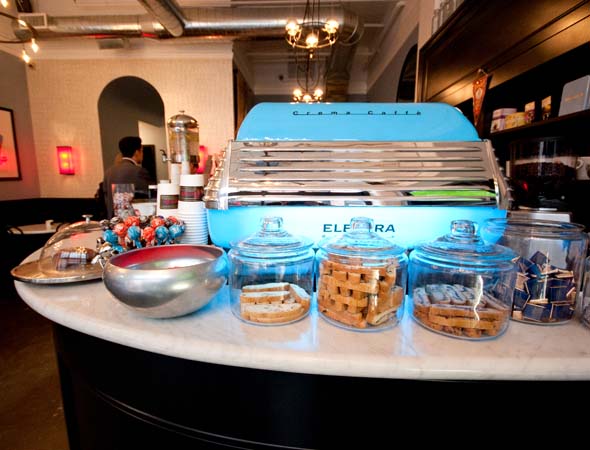 I demonstrated this particular espresso machine at an industry trade show last spring, and from experience I know it takes patience and concentration to make a cup of coffee on this workhorse. With little automation, the fate of your shot, and of the milk you produce is entirely in the hands of the person working the machine. In any other instance, I would call this person a barista - particularly at Barista Espresso Bar - but owner Mike Rutigliano, who has a great deal of respect for the coffee he serves, and the industry as a whole, refuses to call himself a barista. To Rutigliano, a barista is someone who has spent many professional years making espresso behind a bar in Italy.

I order a cappuccino and a single ristretto to get a sense of the coffee coming out of this shop. First, the cappuccino, and then the shot. Rutigliano carefully doses the espresso into his authentically European, single basket portafilter, and brings it over to give it an even tamp. 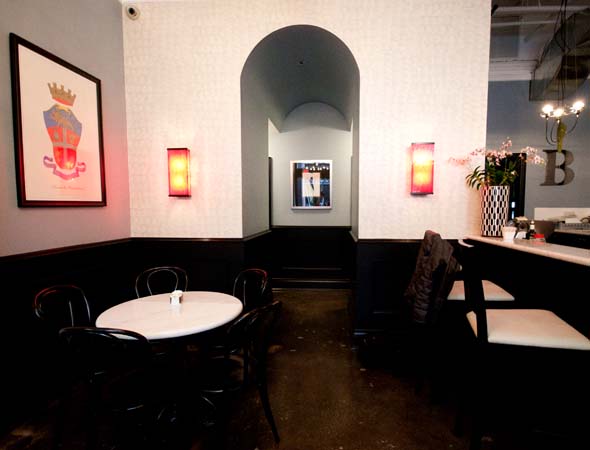 I Though the shot appeared to be running a little fast for my taste, the shot it produced was exactly what I would want from an Italian espresso bar. Not incredibly complex in flavour, the coffee had a sharp initial taste, and ended with overtones of cocoa and dried cranberry. Though Rutigliano was unsure exactly, I could take a good guess from the texture of the espresso on my tongue that this coffee was an Arabica/Robusta blend.

A softer bean, grown at low altitudes, Robusta coffee is highly caffeinated and has a velvety sensation on the tongue. Though many contemporary espresso-heads dislike Robusta and insist on using only harder Arabica beans, many traditionalists like Rutigliano still enjoy the taste of Robusta espresso. Myself, I sit on the fence. In this instance, I would have preferred a slightly more distinct Robusta presence in the coffee. 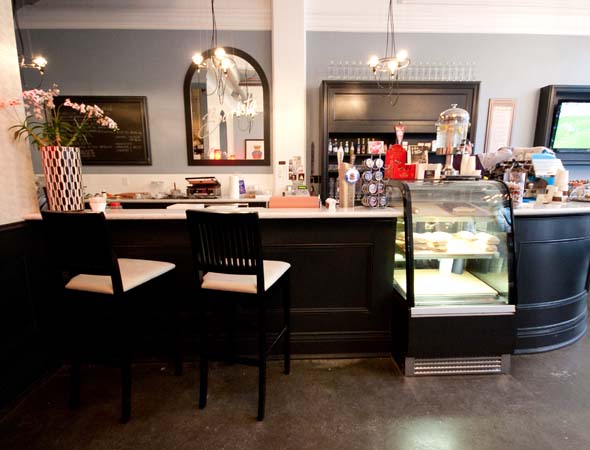 Something missing in the contemporary coffee scene, in my opinion, is respect. Many people like to wage war over Robusta vs. Arabica or even microfoam vs. non-microfoam, and the bottom line is that they're two completely different animals that need to be looked at from two completely different perspectives. Often people are too quick to say that one way is better than the other, but that's like trying to compare bacon and pancetta - They're both delicious, but they're also both different from one another.

To me, a cappuccino in an Italian espresso bar just woudn't taste right without velvety Robusta coffee. In a contemporary cappuccino with dense microfoam, on the other hand, Robusta would be intolerable. You need the distinct and complex flavours of Arabica coffee to cut through the taste of microfoam, but a cappuccino in a cafe like Barista Espresso Bar is considerably different: the foam is much lighter, it's scooped on top of the espresso to preserve its taste, and the Robusta doesn't get lost in the fluffy milk.

Though I would have preferred whole milk, the 2 per cent milk used provided a nice fluffy head of foam to be decorated with cocoa. On top of every cappuccino, Rutigliano uses cocoa stencil to create the image of a coffee cup - a nice touch, if you ask me. Besides looking nice, the cocoa on the milk adds a bit of flavour to the pure milk foam. Unlike a contemporary cappuccino where the milk is poured in, straight from the steaming pitcher to mix with the espresso, in an Italian cappuccino, the milk on top of the espresso is unflavoured. 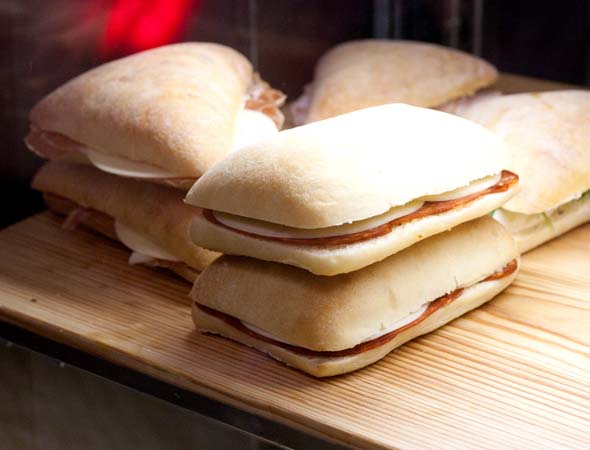 The food at Barista Espresso Bar is among some of the best food I have ever had in a coffee shop. Every day, Rutigliano makes 20-25 panino sandwiches and sells out completely by the end of the day. The enthusiastic owner gave me a lemon and arugula panino with the most delicate mortadella, and also a panino with the speck prosciutto, arugula and provolone cheese.

The lemon slices were so thin on the mortadella panino they melted into the bread and brought the arugula to life. All of the meat Rutigliano uses for his paninos is made by his family. I tried the whole array, and my favourites were the lardo, mortadella and the speck prosciutto. 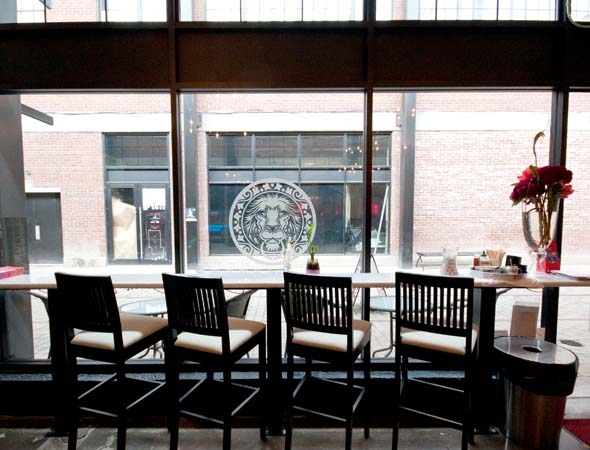 I have always thought of mortadella as an upscale bologna, but this is much, much more. This mortadella was soft, lean and distinctly pork. The speck prosiutto was also phenomenal. There is a fine line with prosciutto between nicely savoury and overwhelmingly salty. This speck was delicate, perfectly salty and not one bit chewy - a complete success. Cut precisely thin on his meat slicer, the meats at this cafe really are worth travelling for.

Barista Espresso Bar was originally on College St. near Clinton, and was opened by Rutigliano's grandfather in the 1950s. Preserving many of his traditions and discipline for precision, Rutigliano has retained the standards of his grandfather's coffee shop he worked in as a kid. "I was passed a torch and am just keeping the flame going," said Rutigliano. 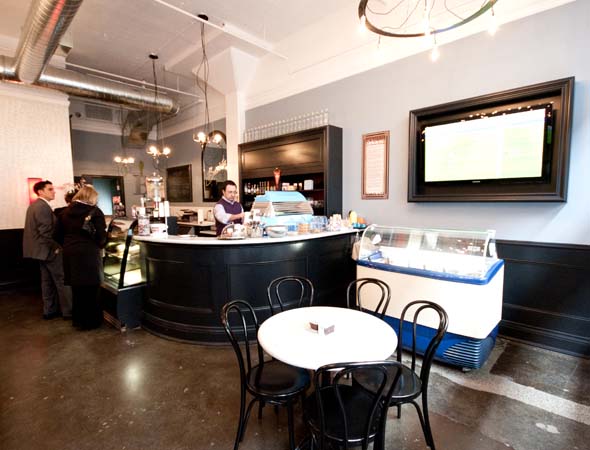 With plans to start introducing tapas-like fare, Rutigliano has applied for a liquor license and will start serving an evening crowd. A second location on Queen St. West is already in the works, and is set to open next year. 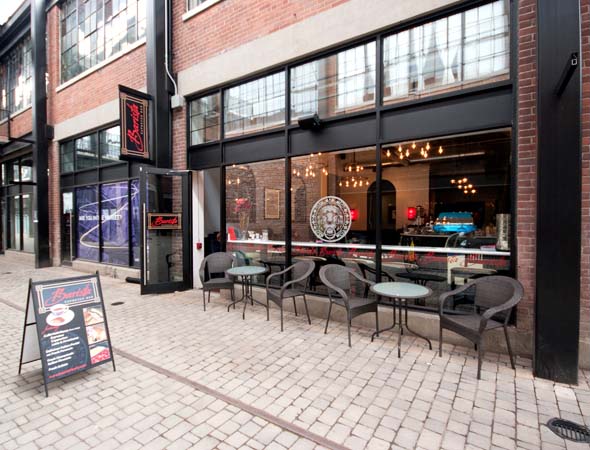