Watson's has been a long time favourite in the Entertainment District, being a cozy bar with an elegant booze menu.

They were formally owned by the same people behind Roxy on King, but have since shifted management this past Summer. 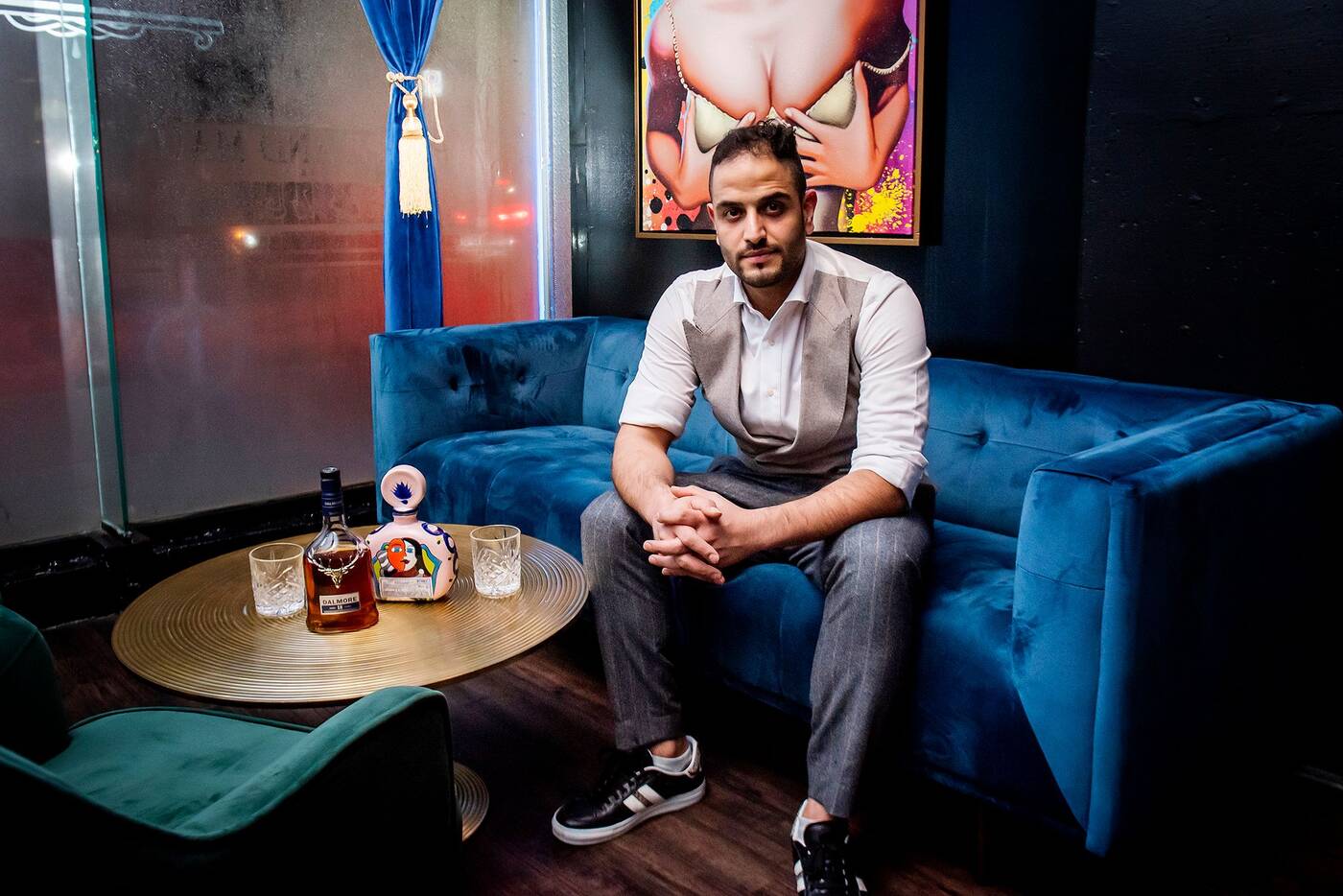 It's now being ran by Ali Bamdad whose had an extensive hospitality career, but also used to be a regular at Watson's.

Since Bamdad has taken over, the bar had a stylistic upgrade, it went from a posh pub focused on alcohol, to an all-in-one eatery and local art extravaganza. 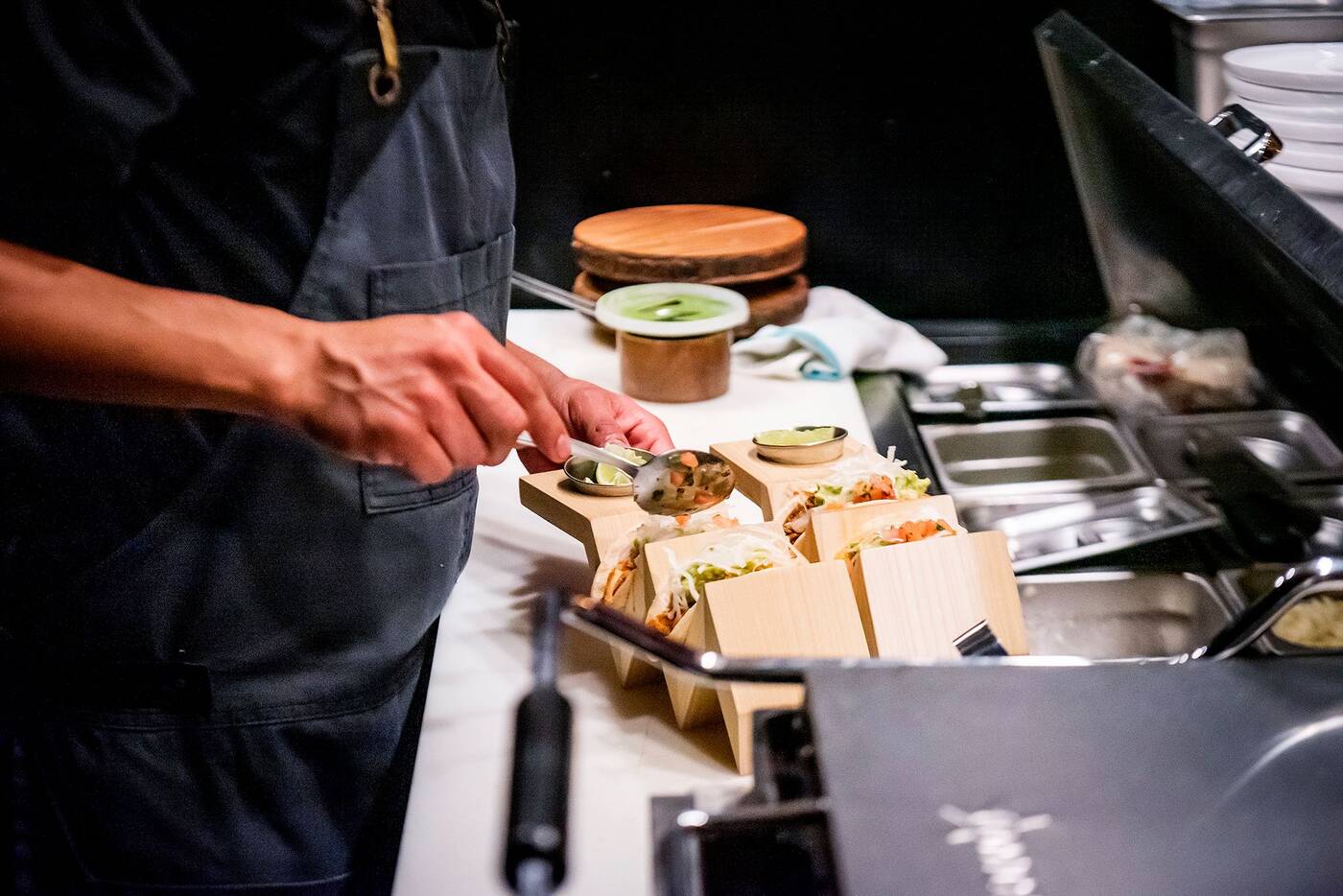 Bamdad is part owner of Watson's with Abraham Ortiz, head chef at Tres Compadres, a Mexican food joint they also manage together. 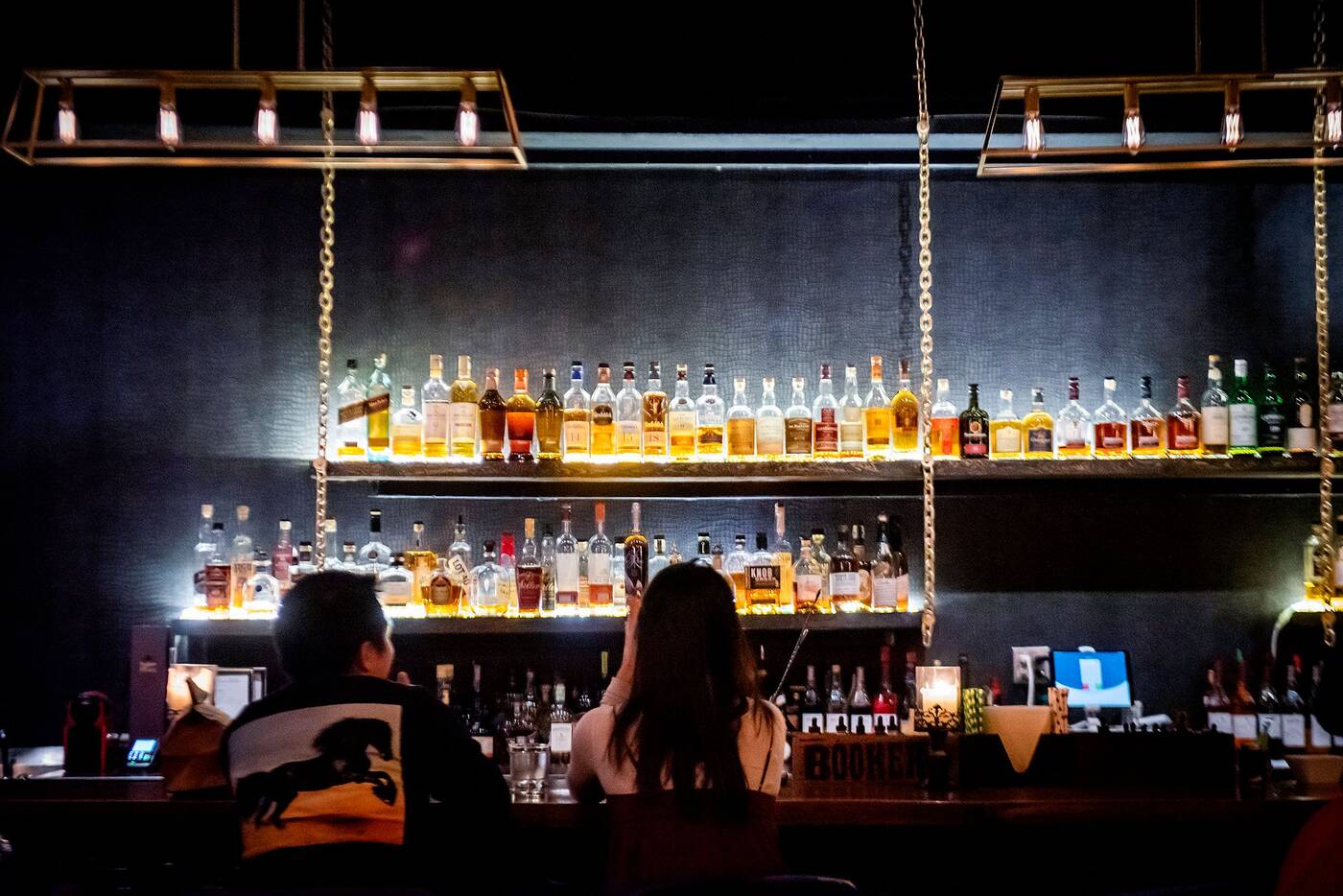 After meeting while working together at Folly Brewing last year, the pair teamed up to bring authentic Mexican dishes to Watson's while still maintaining the bar's focus on a diverse cocktail menu.

Watson's around the corner from King West, but doesn't carry the pretentious energy that you may find at other bars on that street. 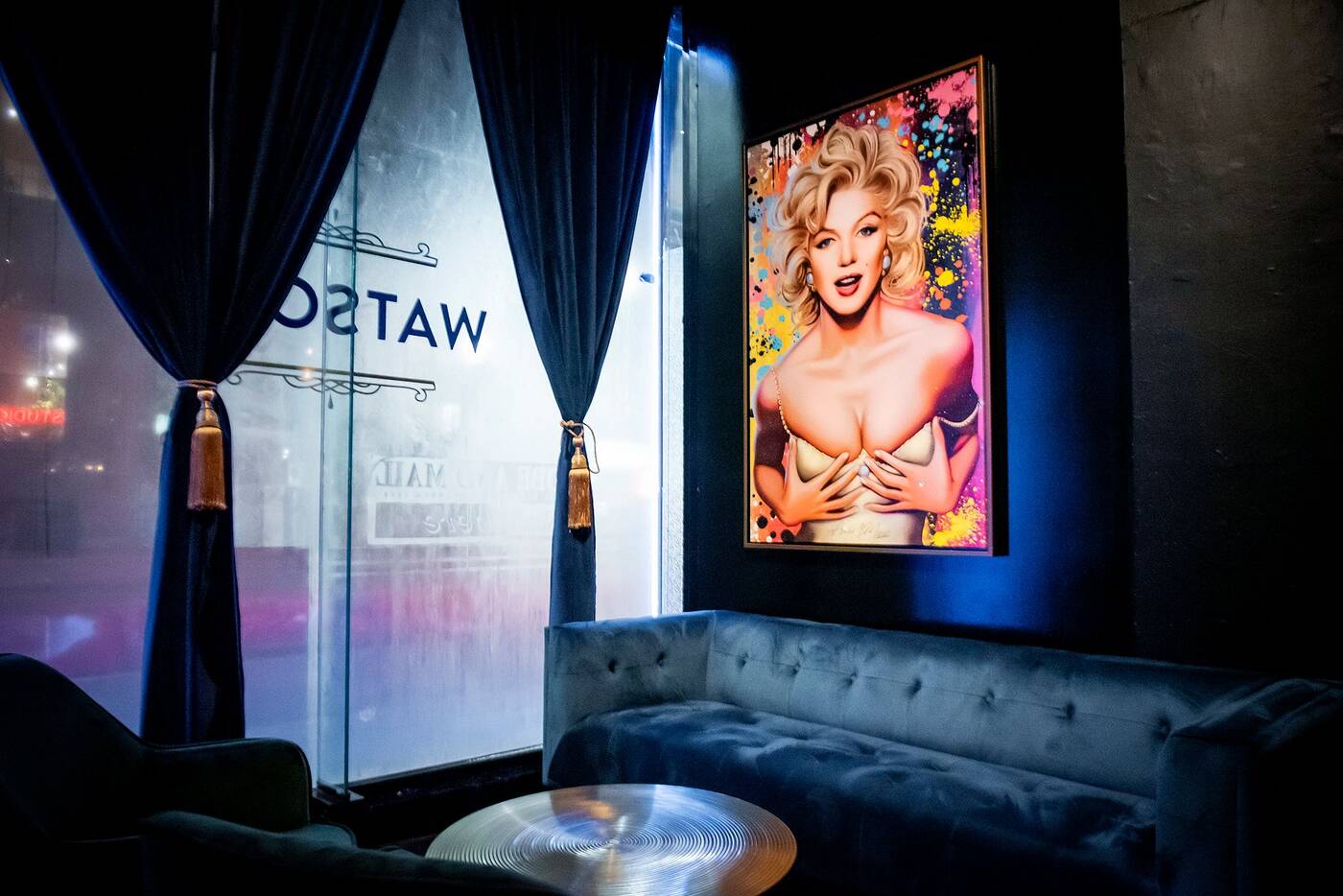 It sort of feels like hanging out in your own living room, it's warm and inviting, especially if you can snag the lounge area with couches near the entryway. 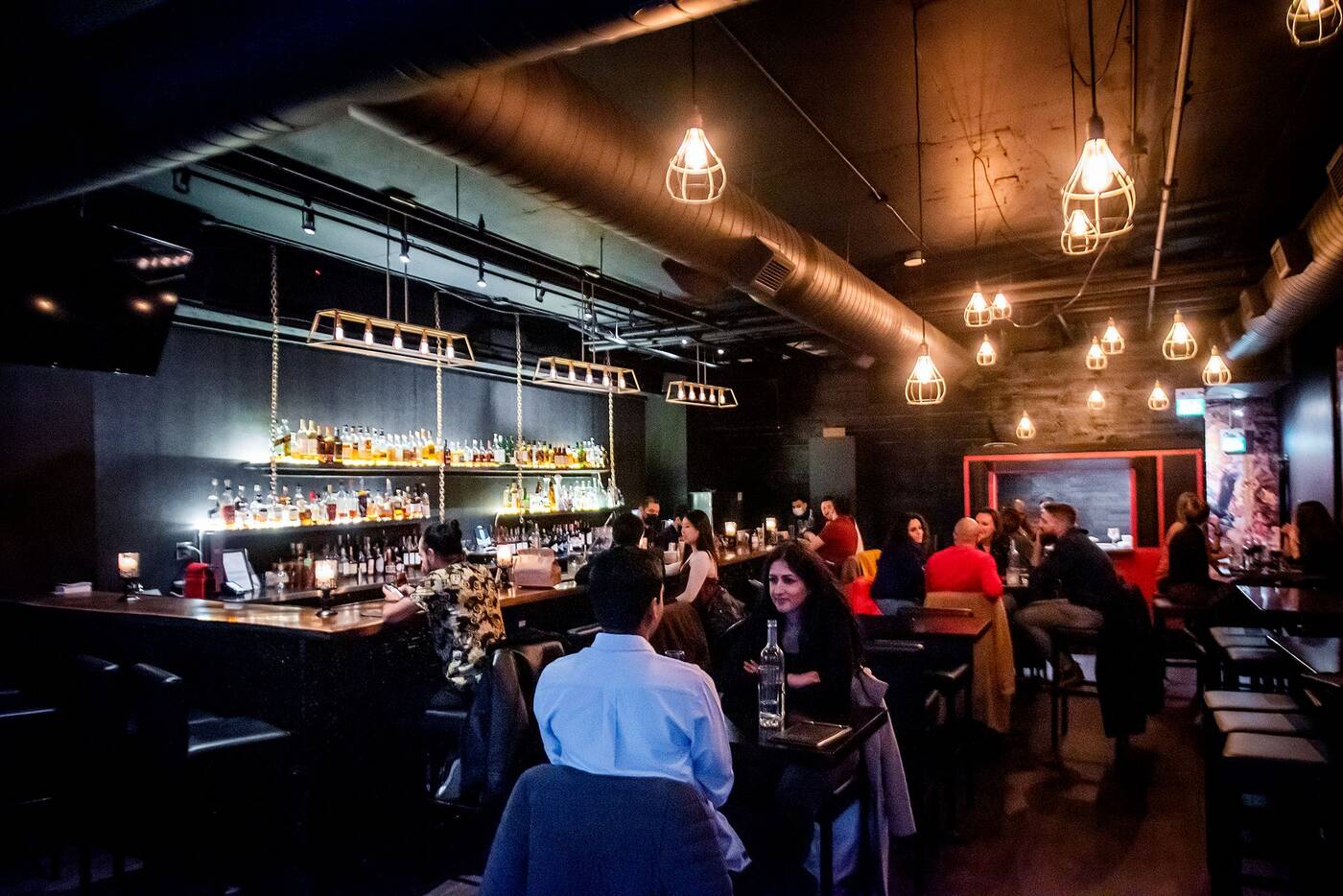 It truly is, the neighbourhood watering hole, where many people come to wine down after a long work week.

It's also a favourite among workers in the restaurant industry who are looking for a upbeat bar with decent prices to kickstart their Sunday nights off. 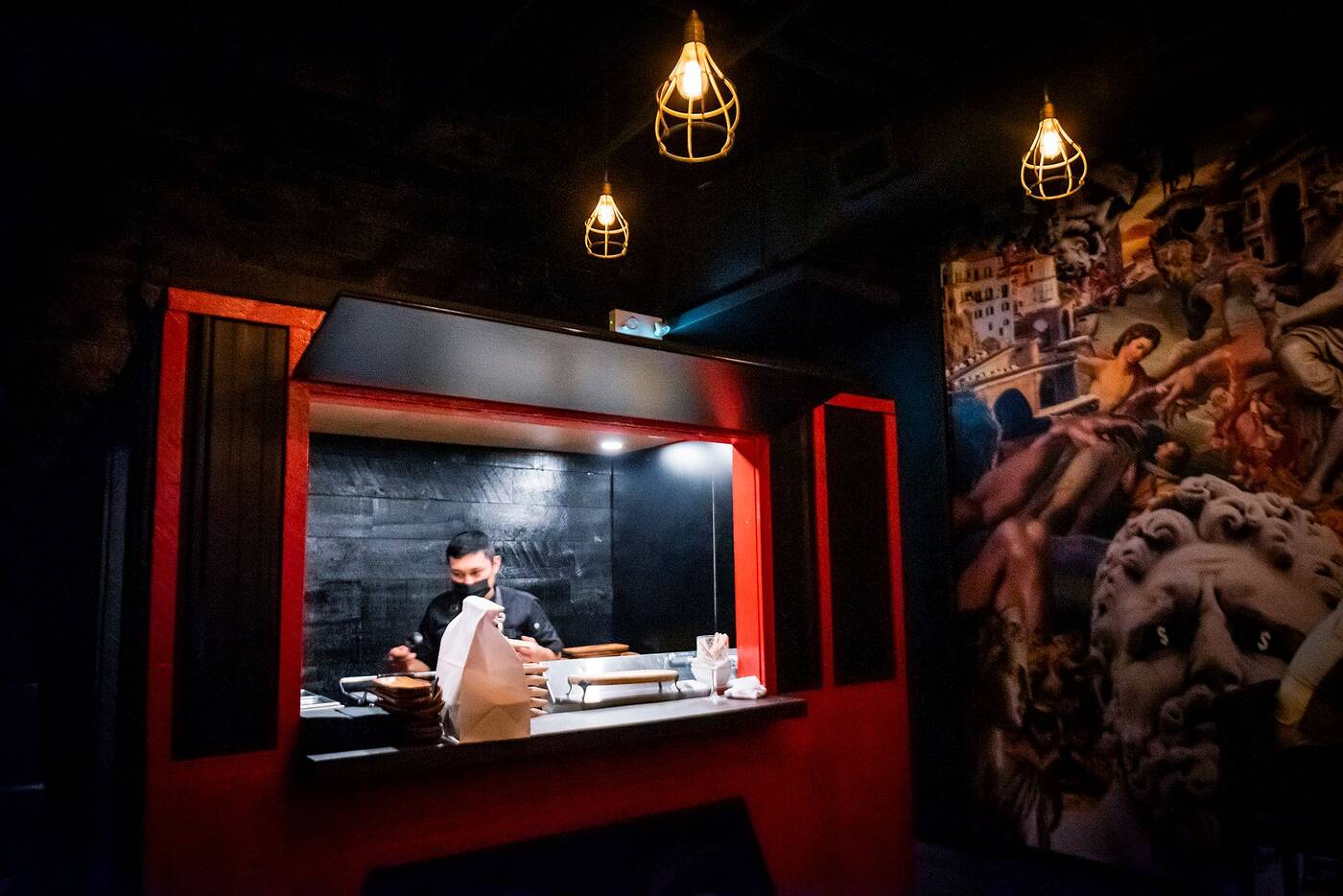 There's a small cart kitchen in the back where all the food from Tres Compadres is made, it's surrounded by walls covered in realist art forms created by local talent Amer SM. 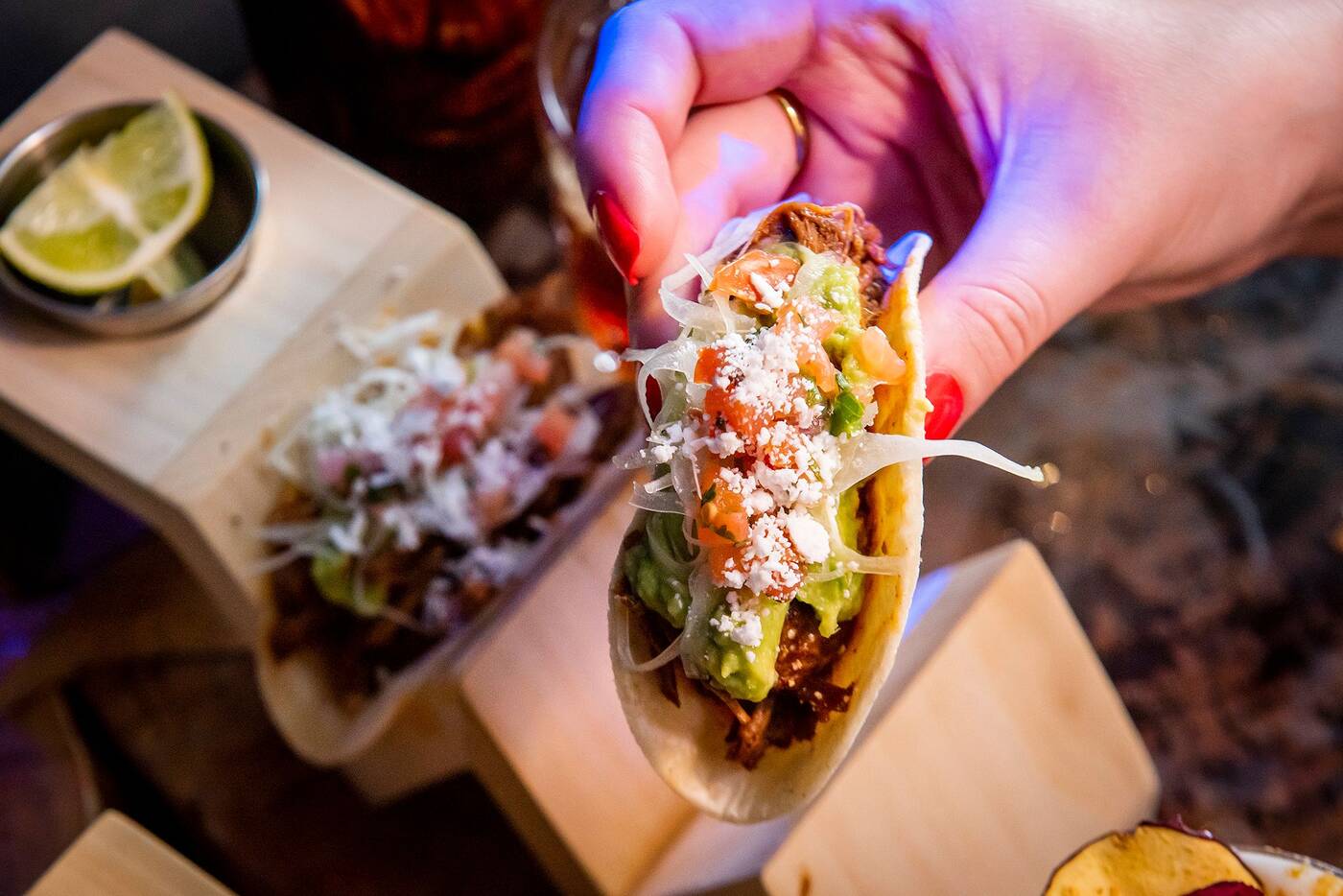 Snack on the Birria Tacos ($9.95) that comes in two pieces and is packed with flavour. Braised short rib is the juicy base of this taco, along with cheese, pico de gallo, queso fresco, and guacamole. 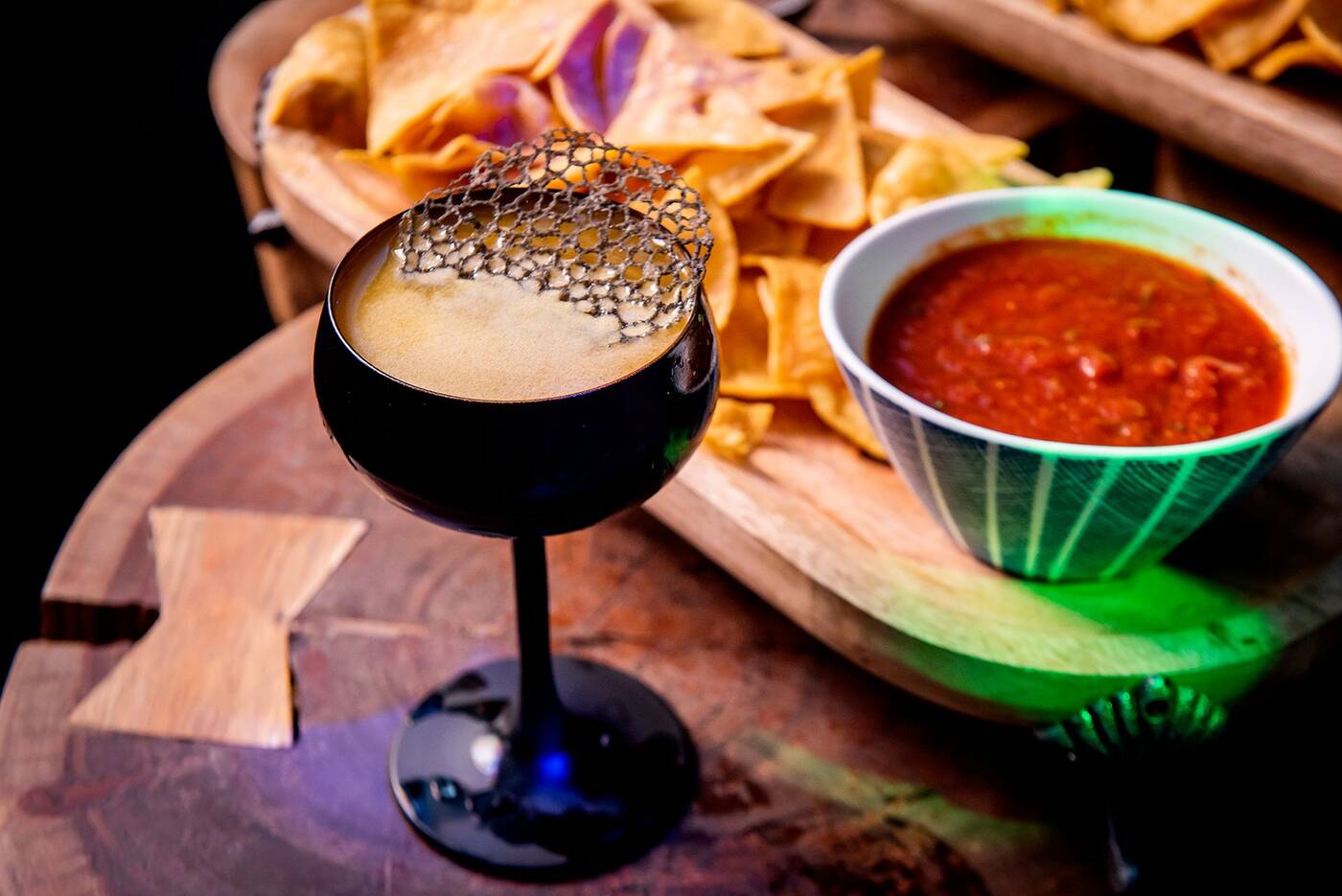 The Soho Garden ($15.00) is a sweet cocktail which pairs nicely with the savoury food. Stolichnaya Vodka is combined with St-Germain, then passionfruit and apple-mango juice is mixed in. Notes of saffron and lemon finish this pleasant tasting drink. 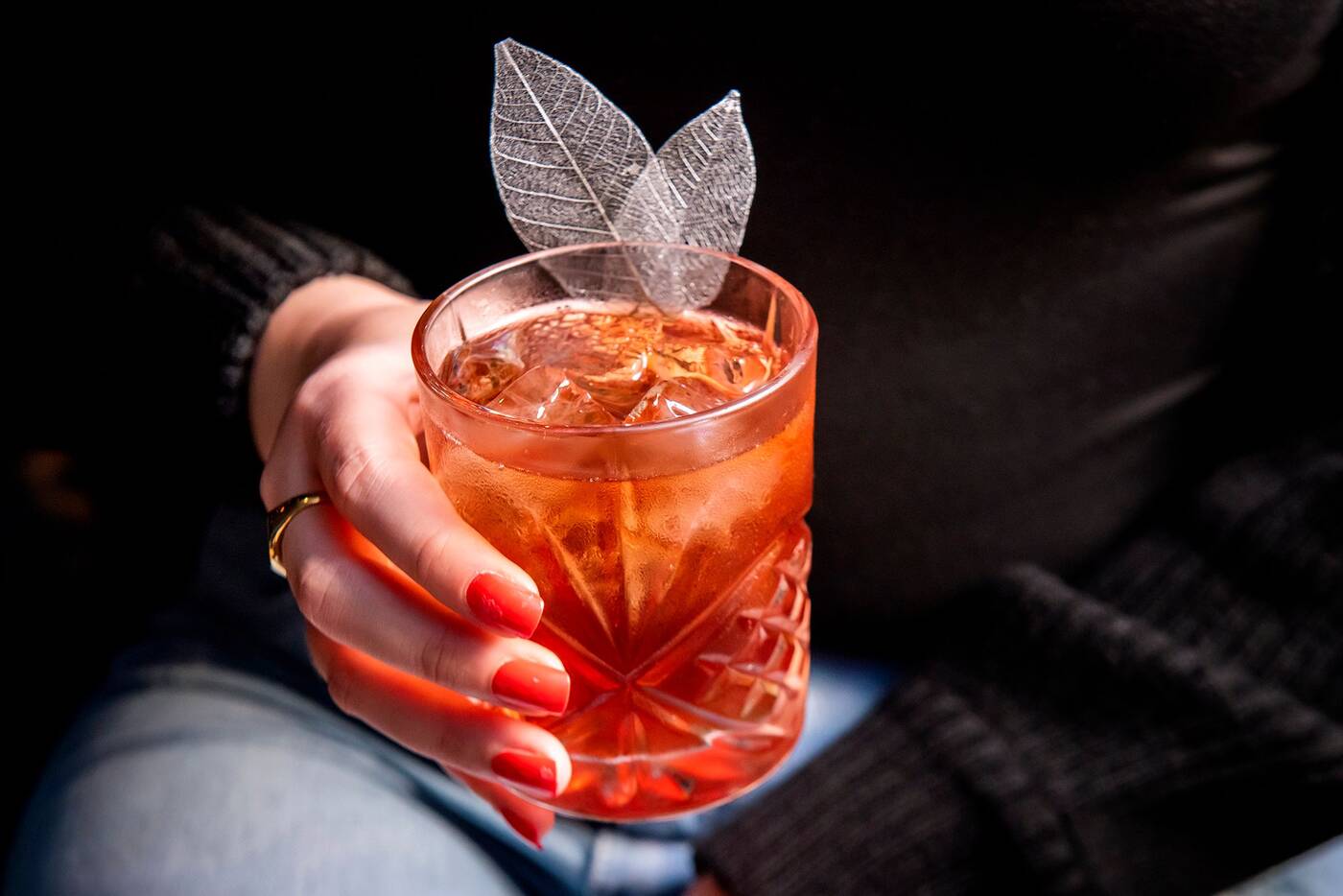 If you're looking for a kick of more alcohol, order the Manhattan to Birmingham ($16.00). Glendalough Irish Whisky gets infused with tobacco and mixed with Bearface Rye, Dolin Rouge, a sweet vermouth, Amaro Lucano and lastly, Green Chartreuse. This one is best suited for the liquor connoisseurs. 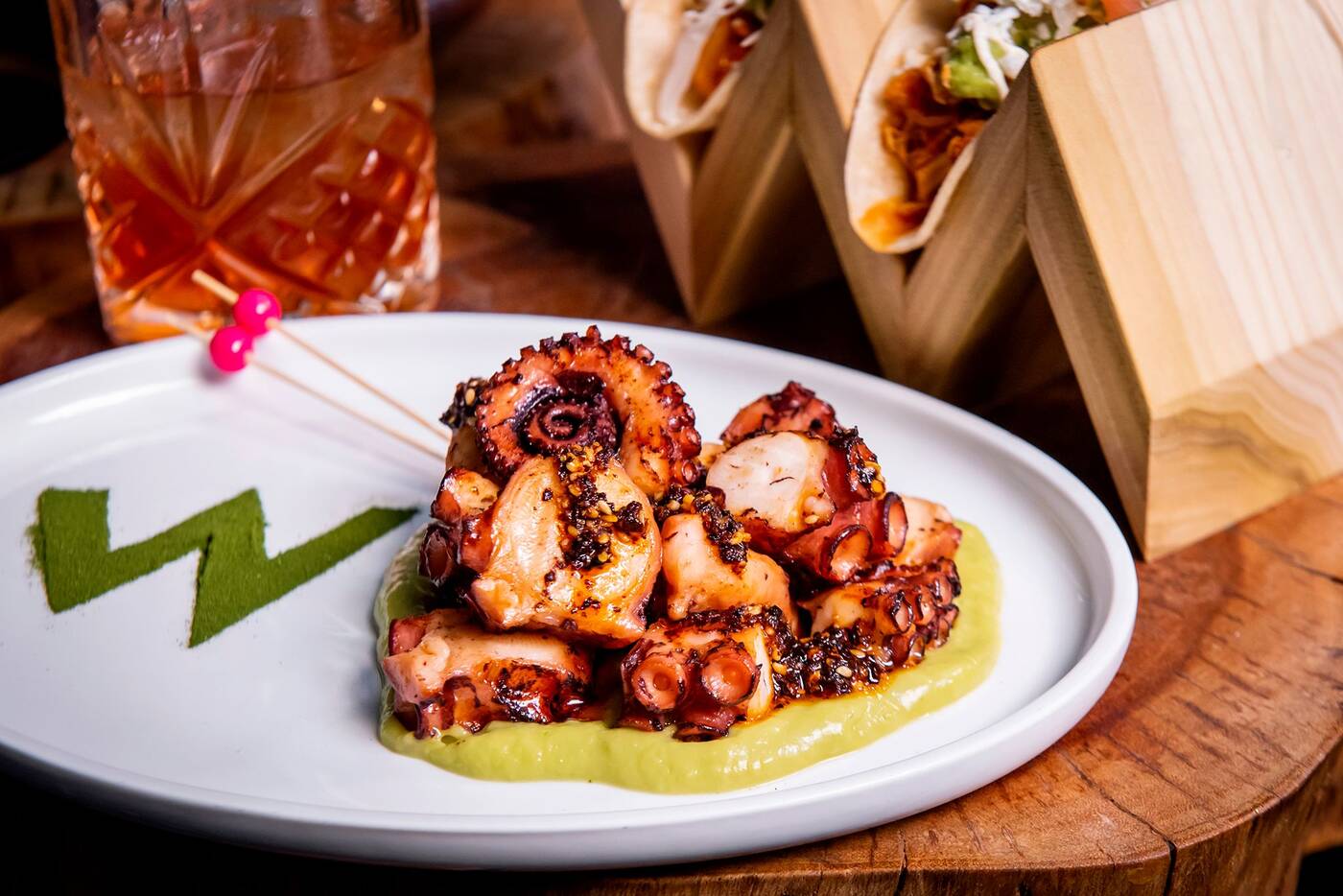 Juicy and tender, the Watson's Octopus ($19.95)  is sure to make you return for more. It's prepared sousvide, meaning it gets cooked in a low-temperature environment for a longer amount of time. Served on a spread of avocado , you won't be able to resist this tasty entree. 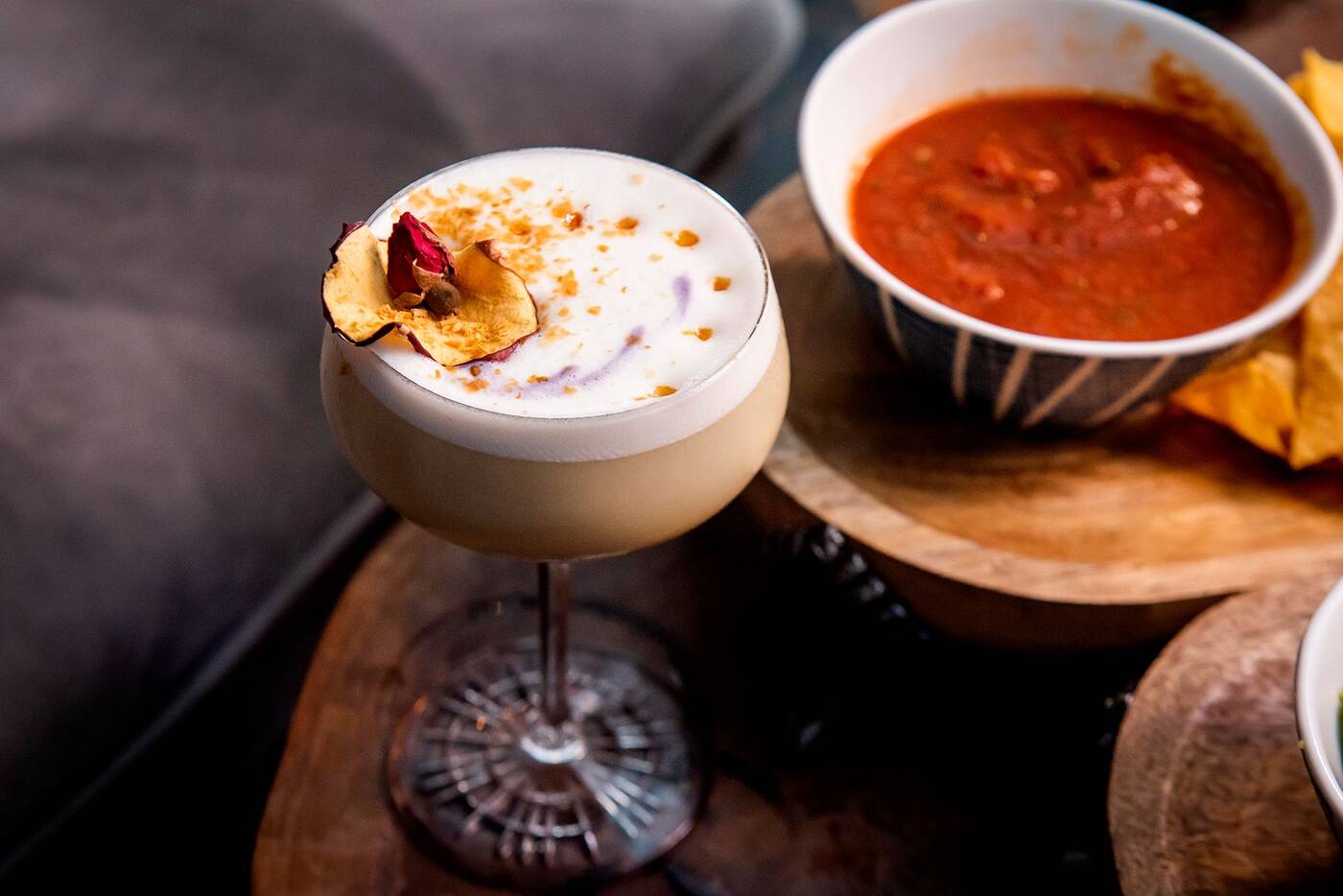 For the tequila lovers, you'll want to try the Forbidden Lady ($15.00). Its creamy white colour comes from egg whites that are shaken with Los Azulejos tequila, Bosscal mezcal, and ginger liqueur. Notes of pistachio and lemon top this refreshing cocktail with a dried flower and drops of creme brulee to garnish. 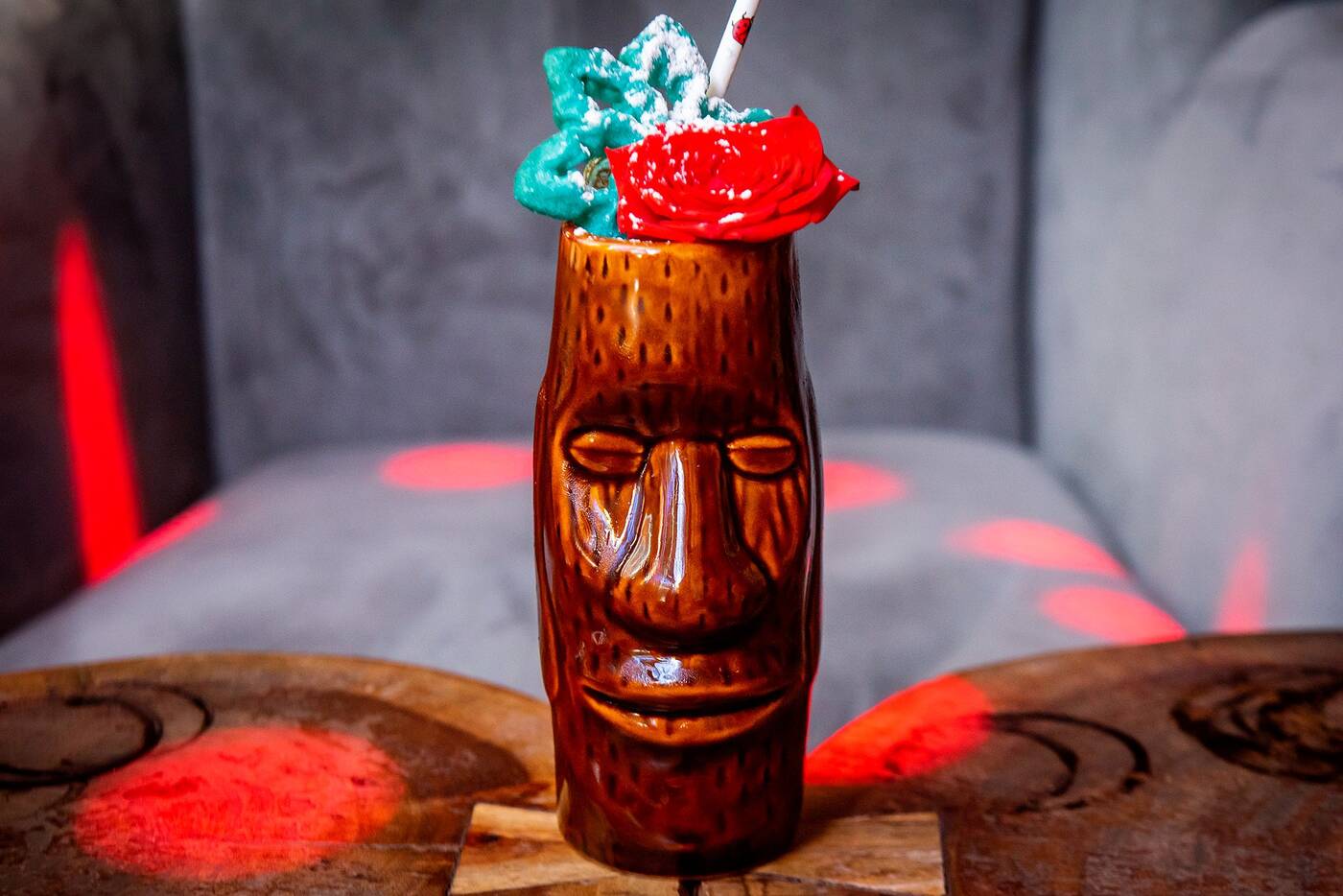 The coolest thing about the Brisa De Lava ($15.00) is that it's garnished with a traditional Iranian cookie that Bamdad's mother bakes and brings in to the bar.

Plantation rum is combined with Ananas and Ginger liqueors to produce this tropical drink. A blood peach puree is added with lemon, creating a fresh and fruity lasting taste. 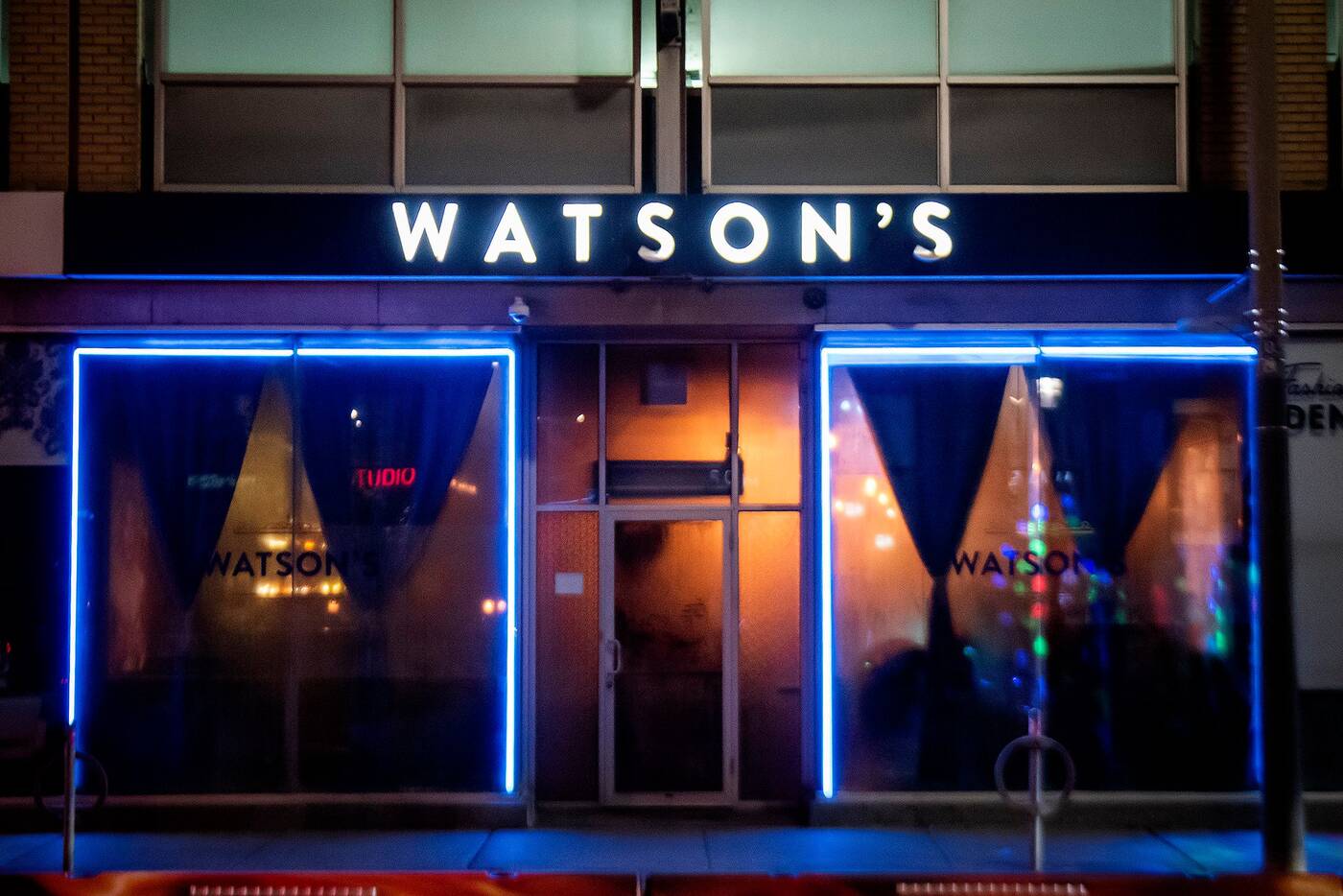 Find Watson's nestled between the Entertainment and Fashion Districts. Surrounded by some of the hottest bars in the city, Watson's has maintained its own flare while still keeping up with their beloved regulars.