Her is a nightlife experience in Mississauga that described itself as “an immersive enterprise, incorporating the luxury and sophistication of a nightclub with state-of-the-art live shows.”

Her boasts bottle service and performances as part of the experience. 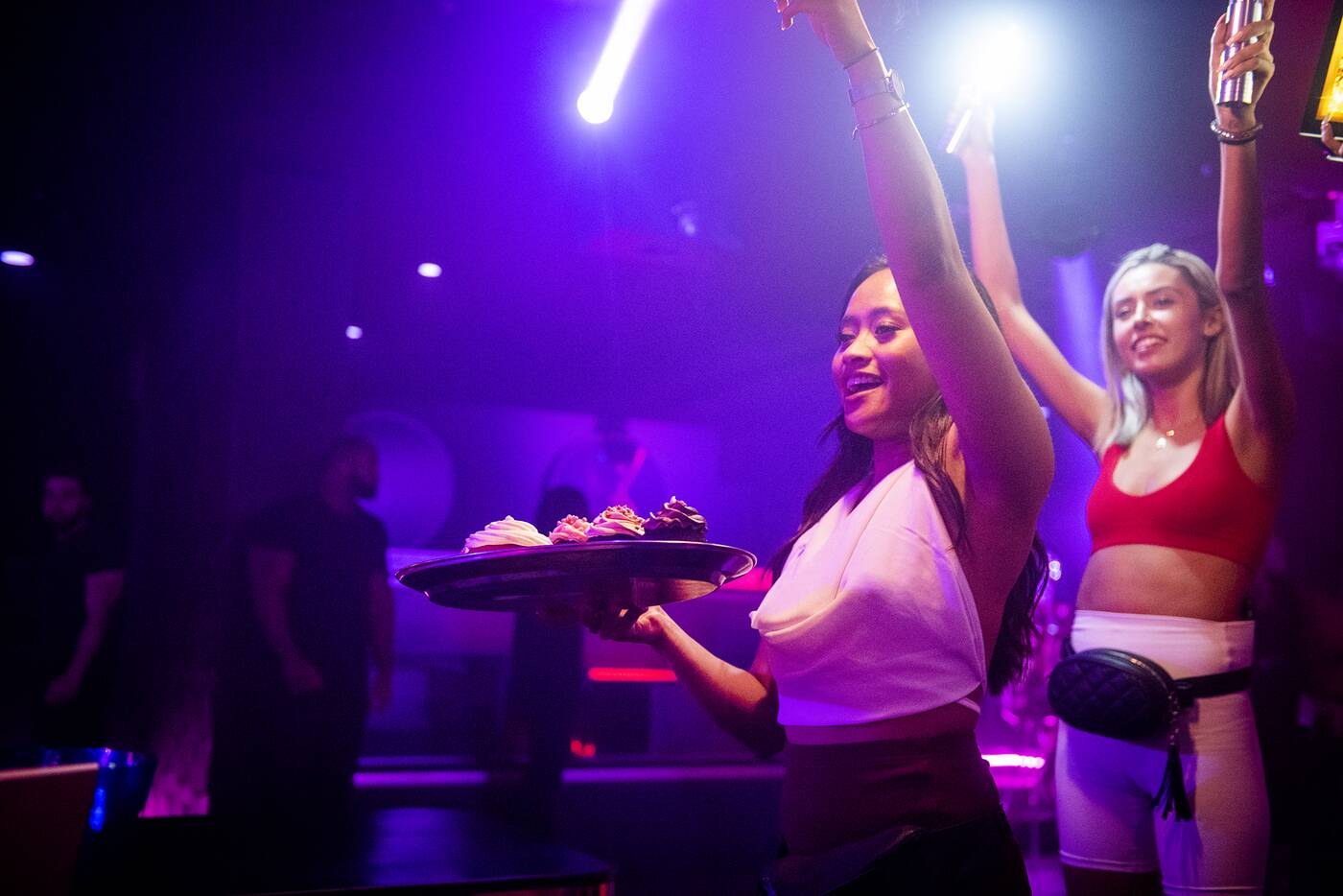 Leading up to visiting Her, I was flooded with questions. What does an adult license mean? Is this a burlesque club? How is a live show different from the typical 2019 Year-of-the-Acrobats-in-Nightclubs? 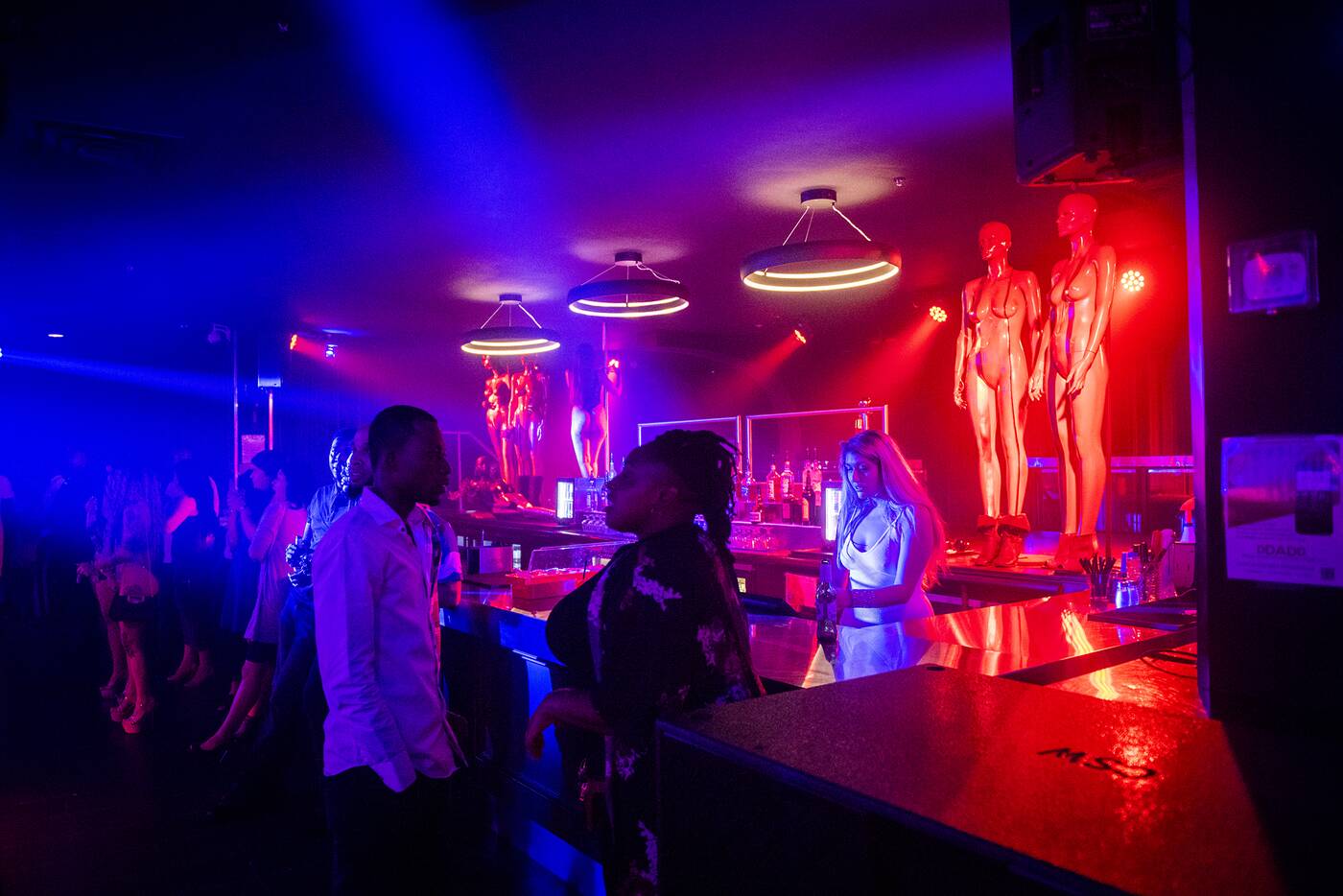 Walking into Her, I was met with answers. Dear reader, Her is a strip club. And what a totally different kind of strip club it is. 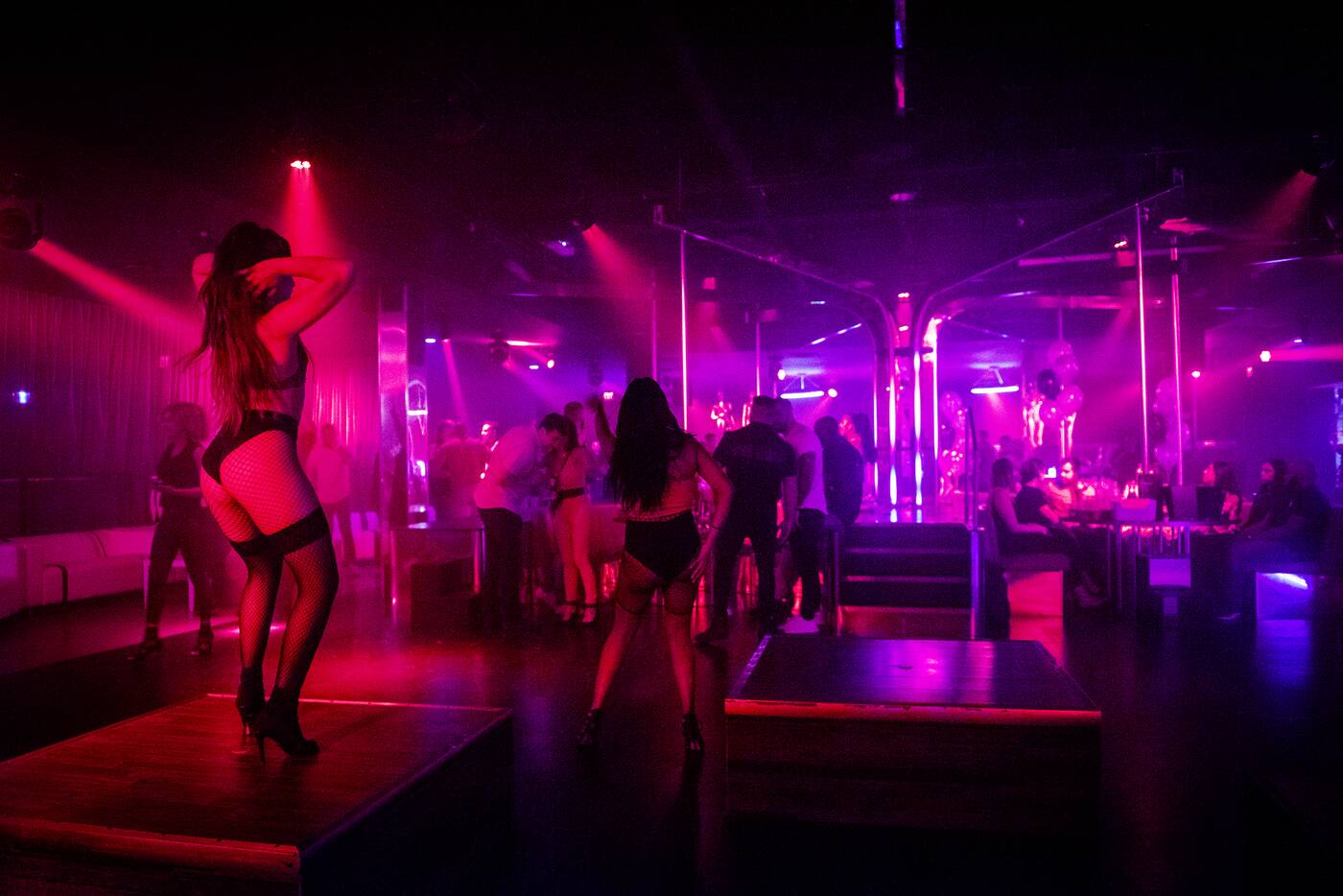 The entrance at Her feels very nightclub-esque. The hallway is lit up with trendy neon signs spelling out messages not unlike Instagrams from Christian MLM-touting bloggers (“be her,” “see her,”,“love her wild”).

The main space is huge and decorated with pops of hot pink and lots of silver metallic mannequins.

On the walls, the art is somewhat similar to the poster of women kissing that every dude pretending to no longer be a virgin had in his dorm room, but much better. There’s a focus on lips and tongues and lots of millennial pink, and a giant gumball machine along one wall. 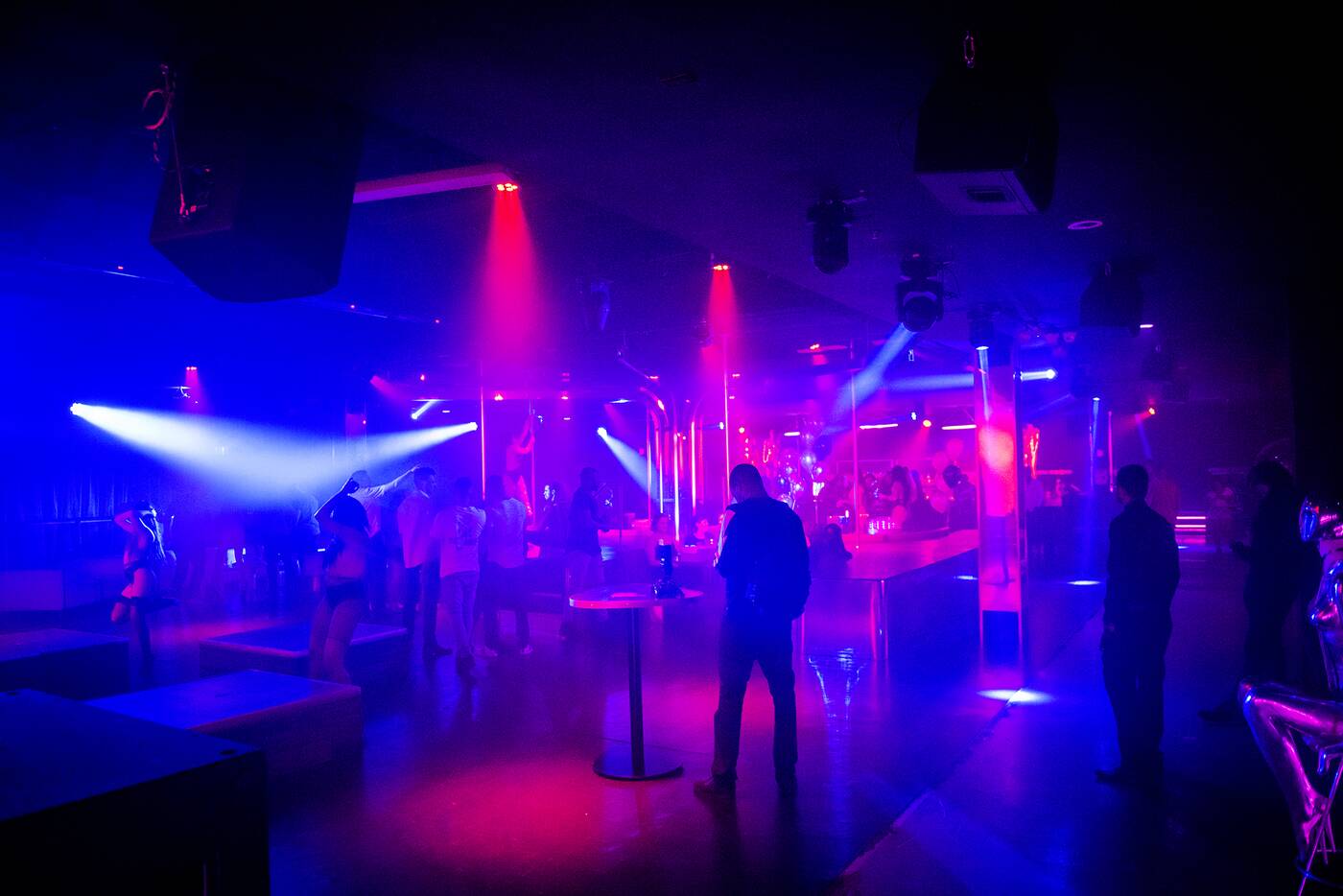 As someone who is so naive that I believed that it cost a quarter every time you turned on the light (a lie told to me as a child to discourage flickering the lights at my homemade rave) until a few weeks ago, I had truthfully never been to a strip club before Her.

However, a team member who described himself as having been to a strip club “five or six times” says that the set-up of Her is very different to the traditional strip club. 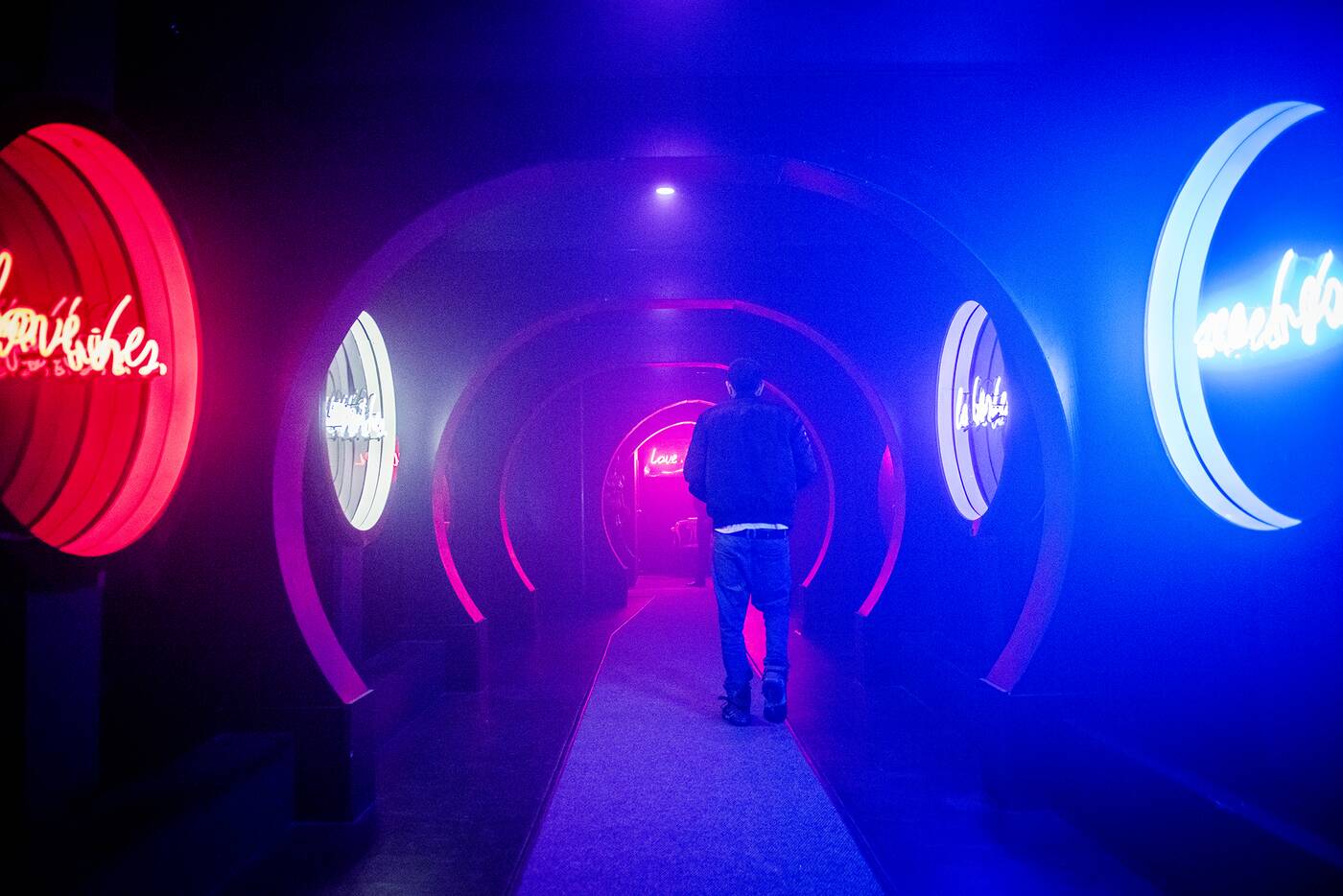 There are bottle service booths built around the stage, and VIP areas around the perimeter. There’s a bar at the back and plenty of room for dancing, as well as scattered tables for people to lean and sip. 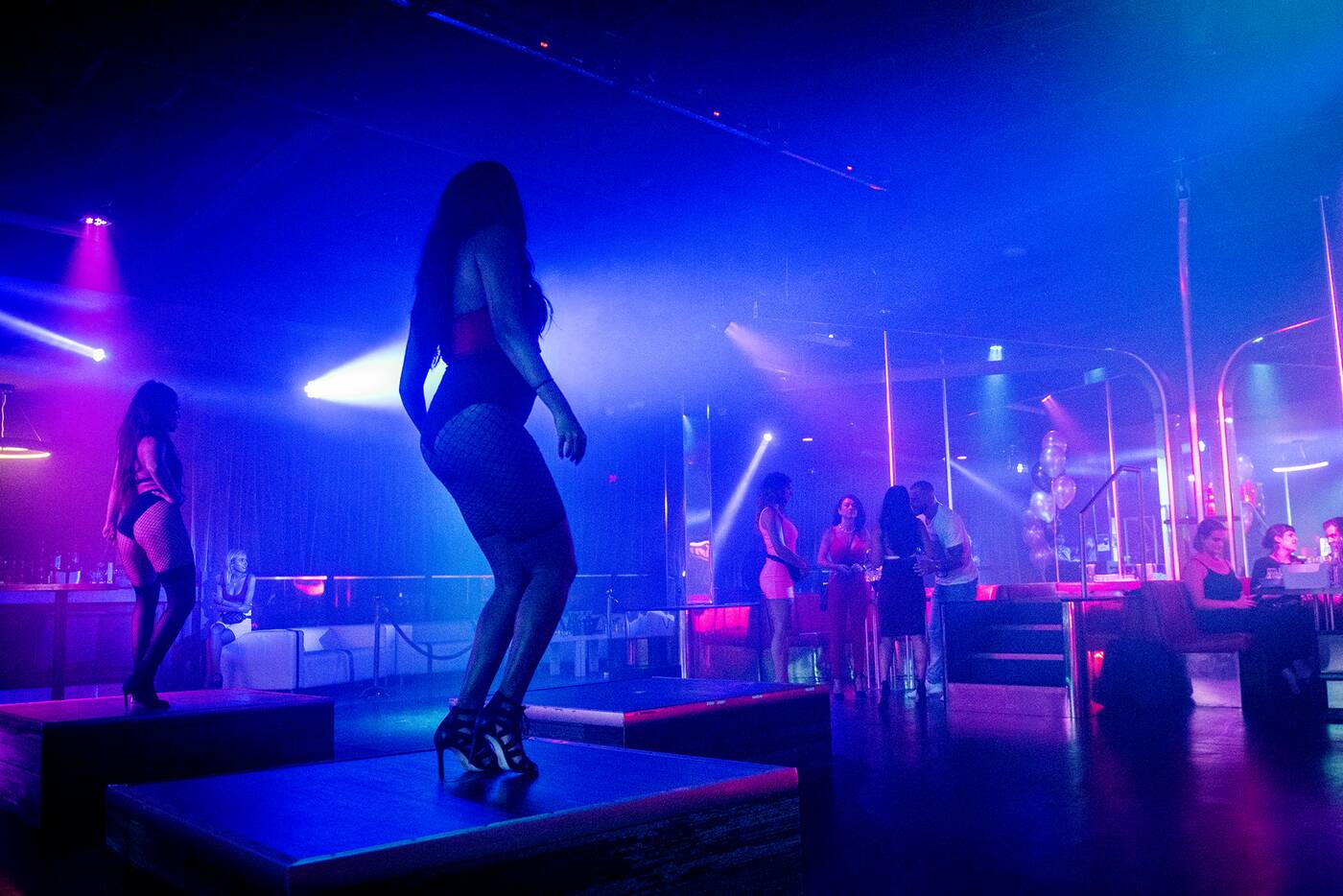 We opted for bottle service, which is definitely a choice I would recommend, especially if you’re with a big group like a birthday or bachelorette party.

A bottle of Grey Goose with mixers ($560) was shared among a bunch of us but also got us a booth in the middle of the action, which my strip club insider who had only been to a strip club “eight or nine times” said was key. 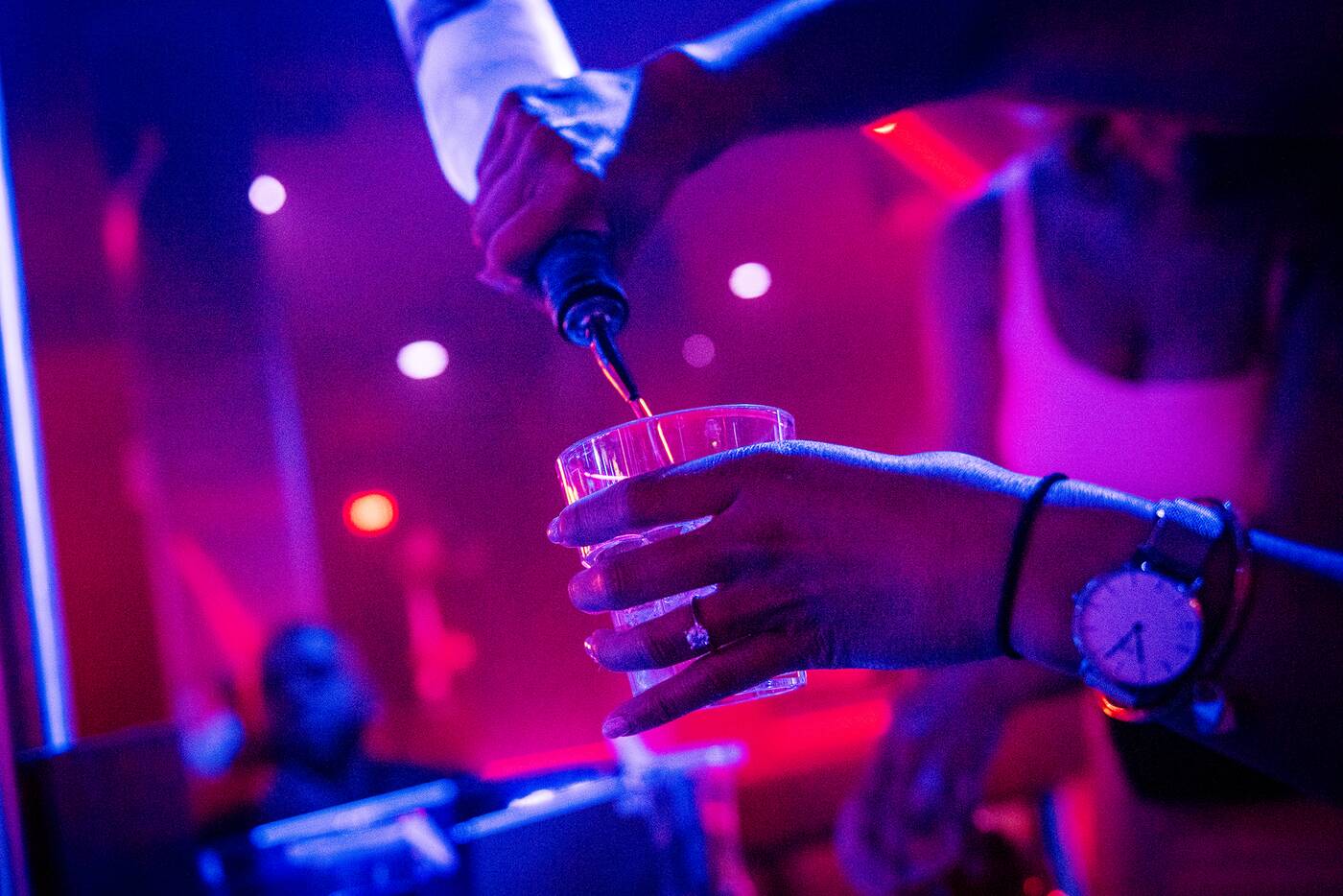 Without getting into the debate as to whether strip clubs and sex work help or hurt women (let’s agree that women have agency and focus on fair and safe work environments for them instead of ragging on them, don’t come for me), the women dancing at Her are incredibly talented.

Not since the iconic Yvie versus Brooke Lynn Hytes lip sync on Rupaul’s Drag Race have I seen such a level of skill and body awareness. 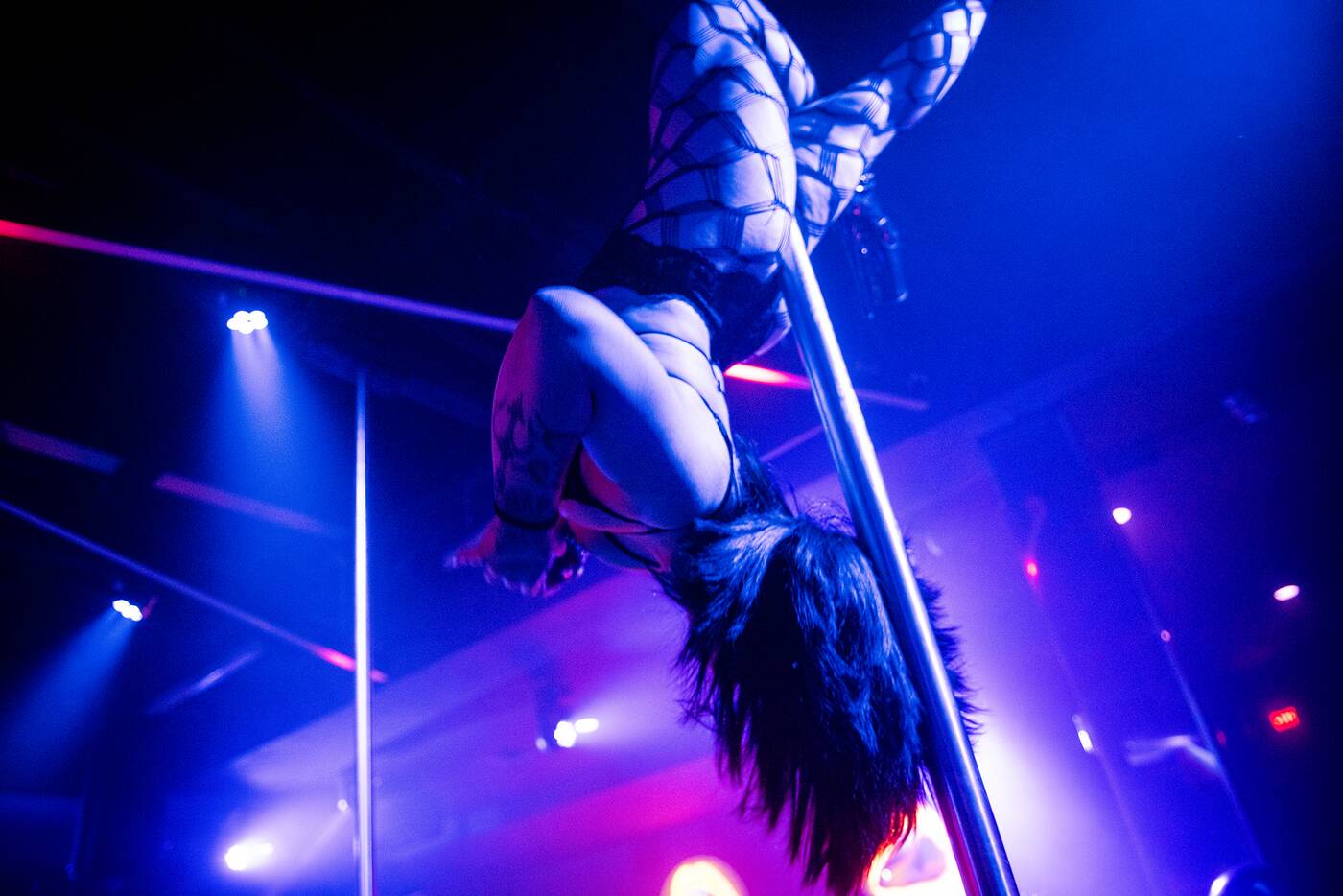 While Her is the first strip club-meets-nightclub in the GTA, one of the owners, Mike, told me that concept of Her is based on E11EVEN, a similar venue in Miami. Though Her offers lap and private dances, the strip club is more for the aesthetic than the purpose. 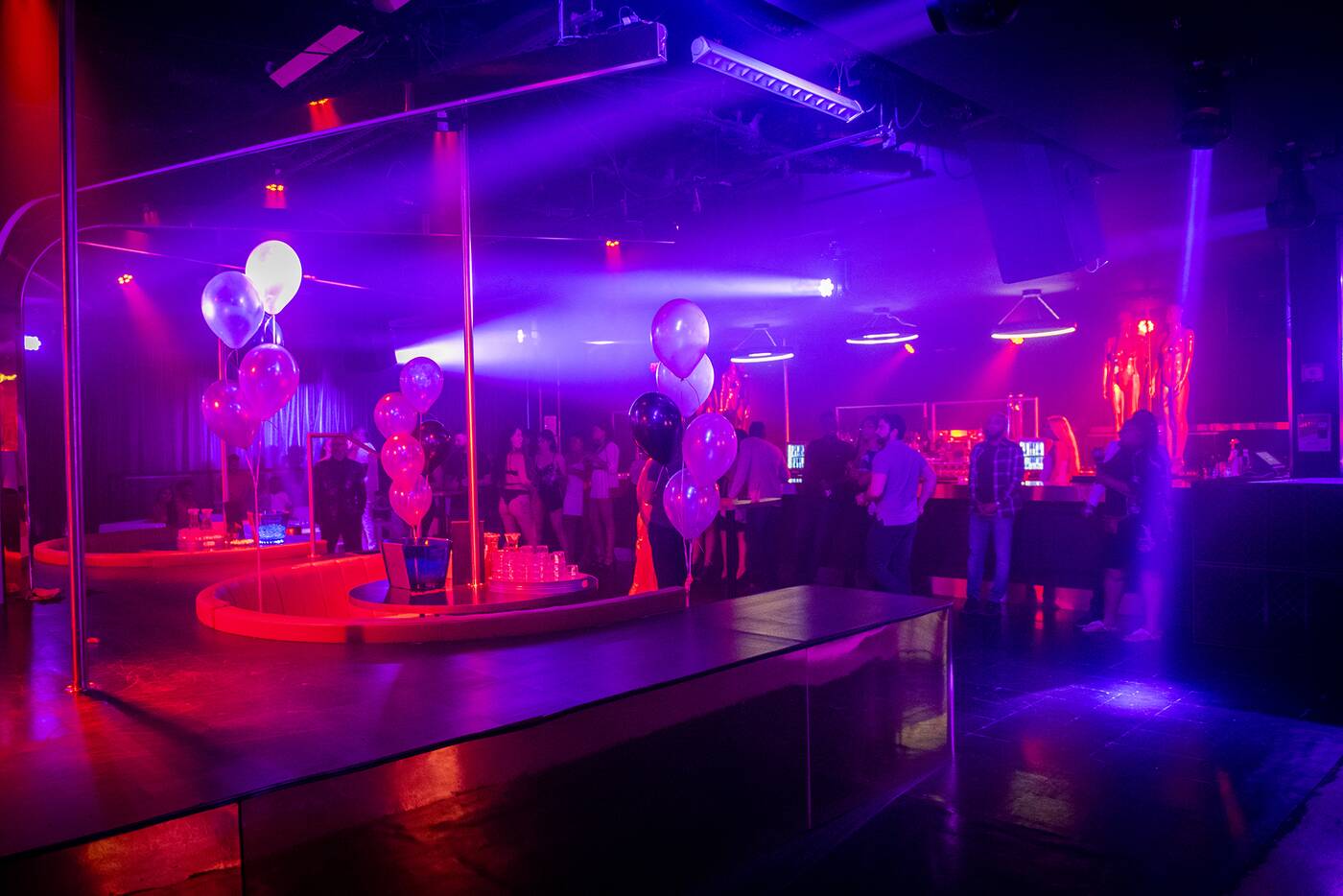 The team behind Her wanted to cater to women and make a space where women could come and feel comfortable in the ways men often do in these environments. Part of the female push is creating women-friendly promotions, like serving rose wine and bellinis, and much of it is blatant in the advertising.

The initial press release includes the line that “women run the show” and spells out that its for women as well as men, and the Instagram feed looks like it could be for Glossier’s Play line or a very well-curated Ariana Grande fan account. 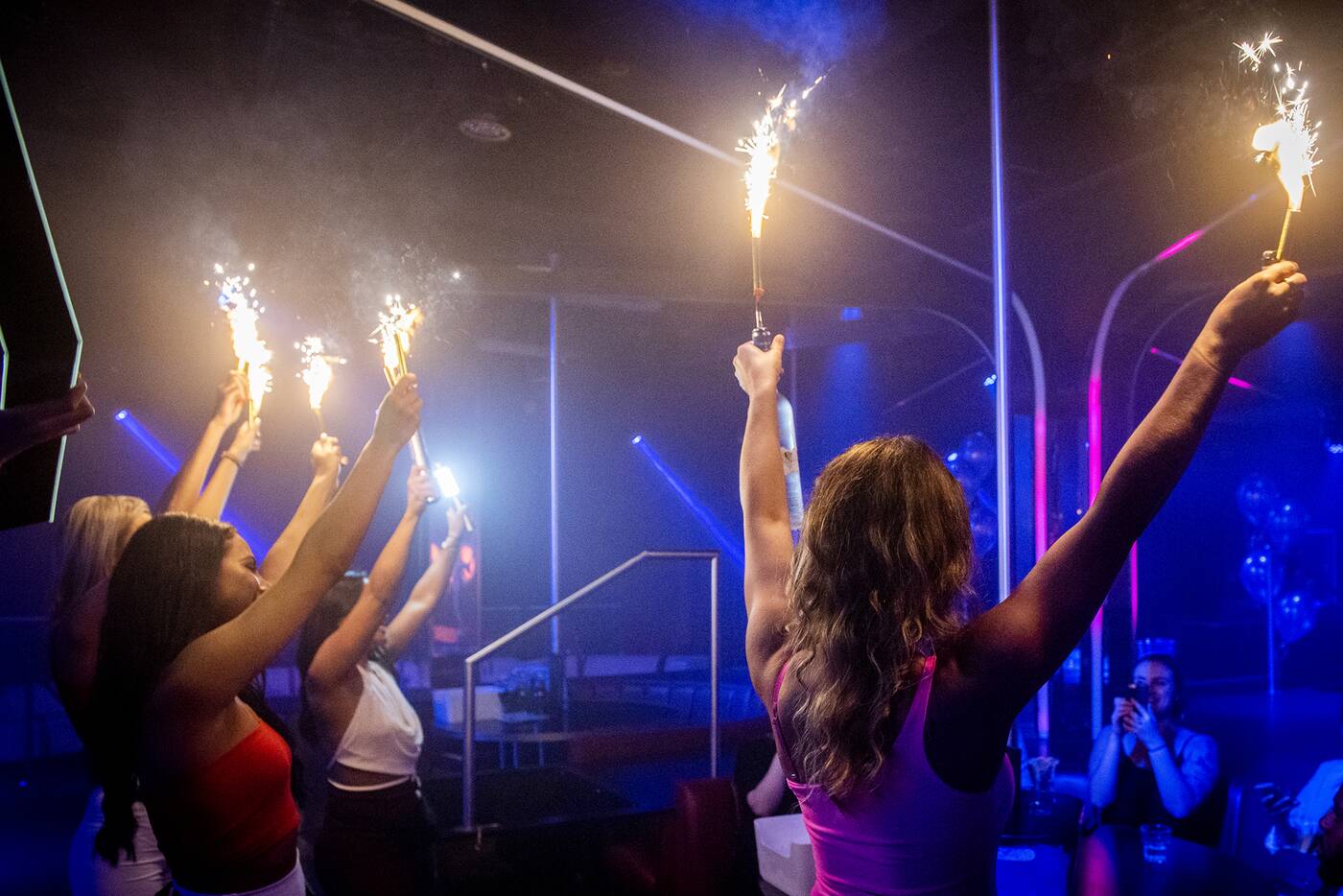 In terms of actually providing a female-centred strip/night club, it felt like Her did a decent job. At any point in the night, there were more female clientele than male, and toward the end of my stay at Her, there was a group of young people gathered around the stage in a group.

My strip club insider who had only attended a strip club “okay.. maybe twenty times?” said that it was normal to have a group of dudes clustered around the stage, but this group was all young women, clapping and cheering the dancers on. 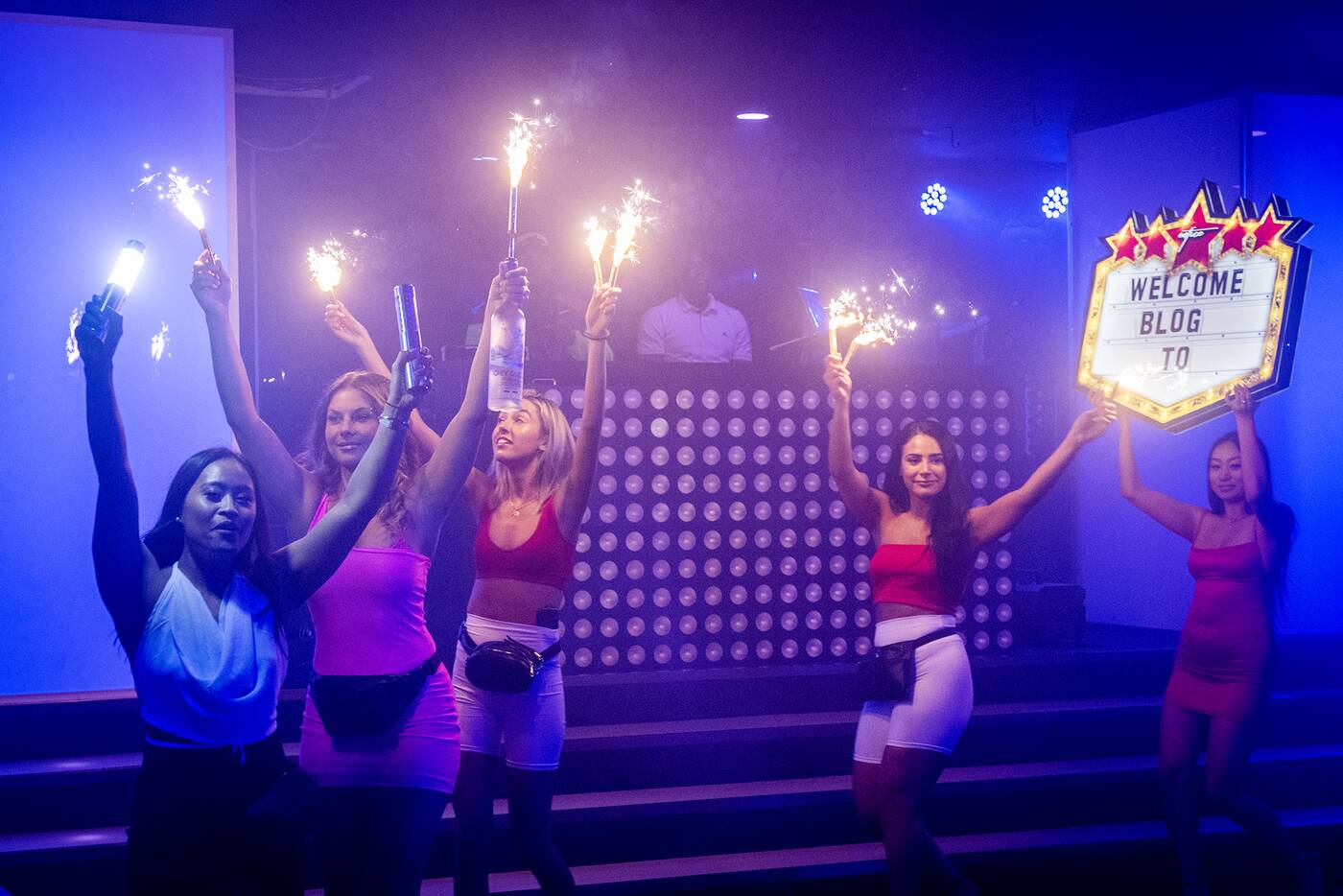 With a recent dearth of female-focused nightlife in Toronto (and especially nightlife focused on female sexuality when male sexuality-focused clubs are alive and well), it’s a welcome addition to have something that’s a bit different and a bit more women-centric.

Creating more space for and in celebration of women is certainly worth the trek to Mississauga. 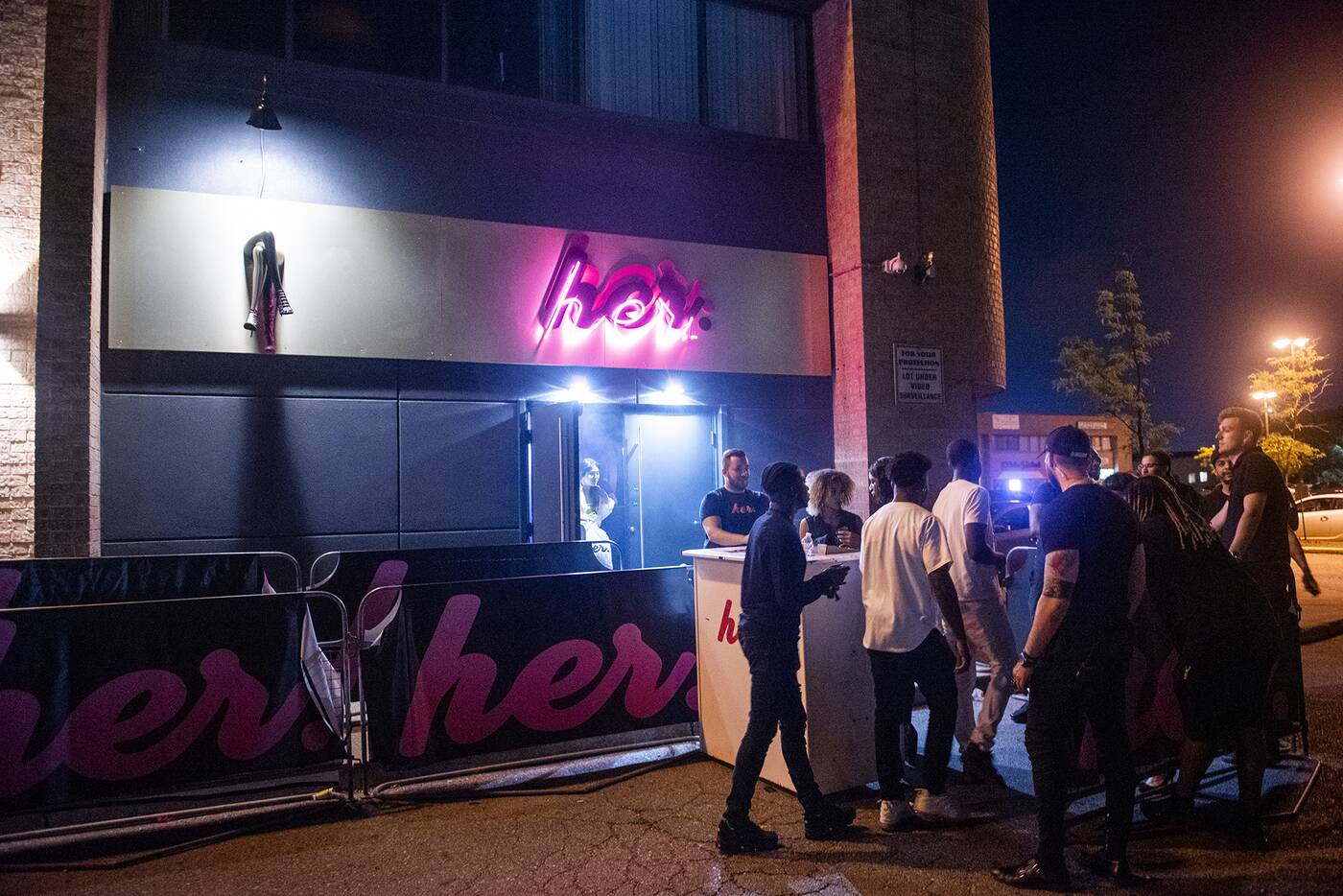