Members Only Waffle House is an X-rated dessert shop that grew from a famed pop-up stand on Queen West.

The craze for waffles began in the summer of 2021, when they set up a stand in partnership with Frisaca, a Mexican restaurant in the neighbourhood.

Owner Kirsty Fan tells blogTO she found a concept for X-rated desserts being done in Madrid, Spain and that's when she had the idea to bring a similar concept to Toronto. 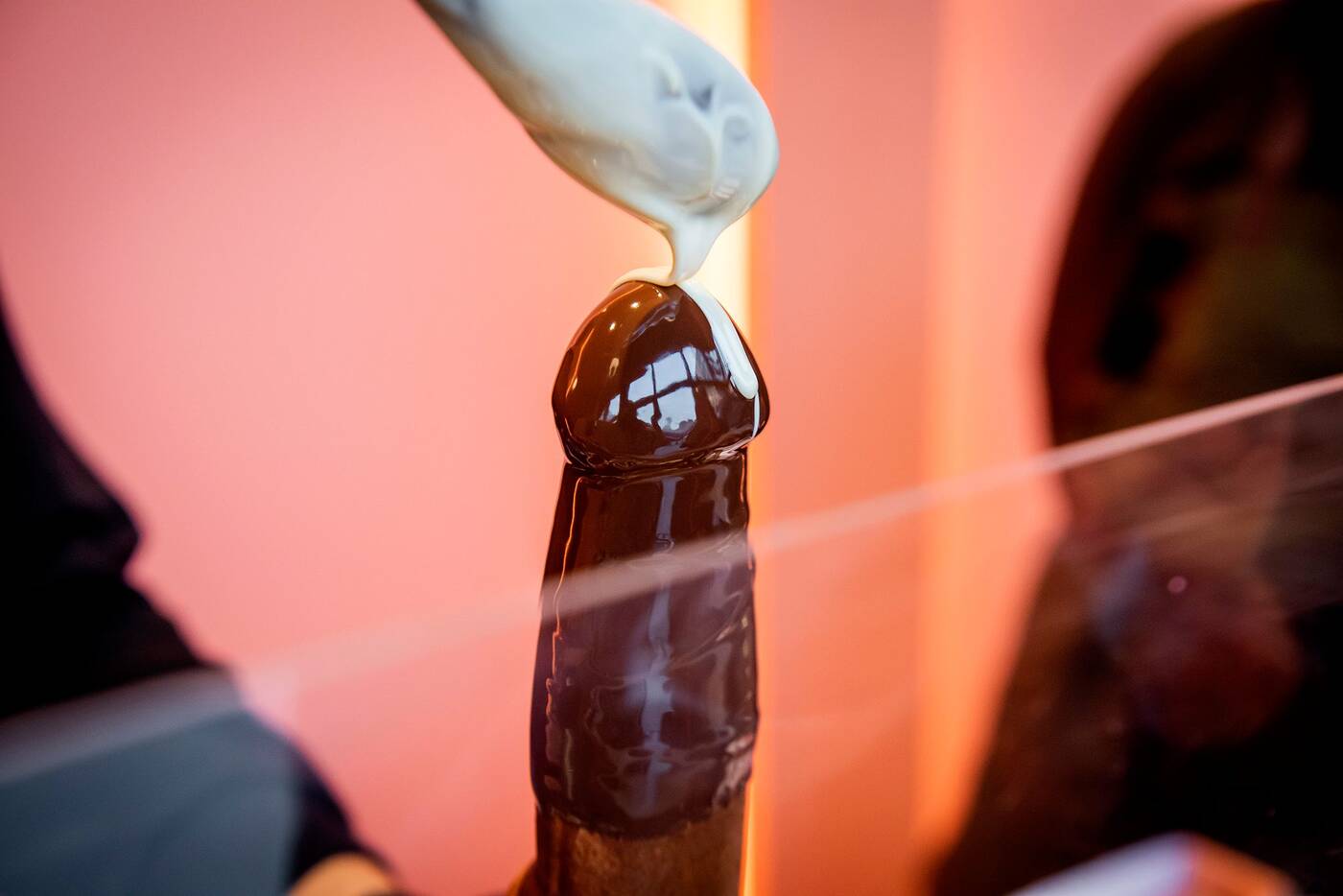 Fan says people started lining up all the way down the street for their pop-up stand, entertained and fascinated by the idea of eating a member waffle. 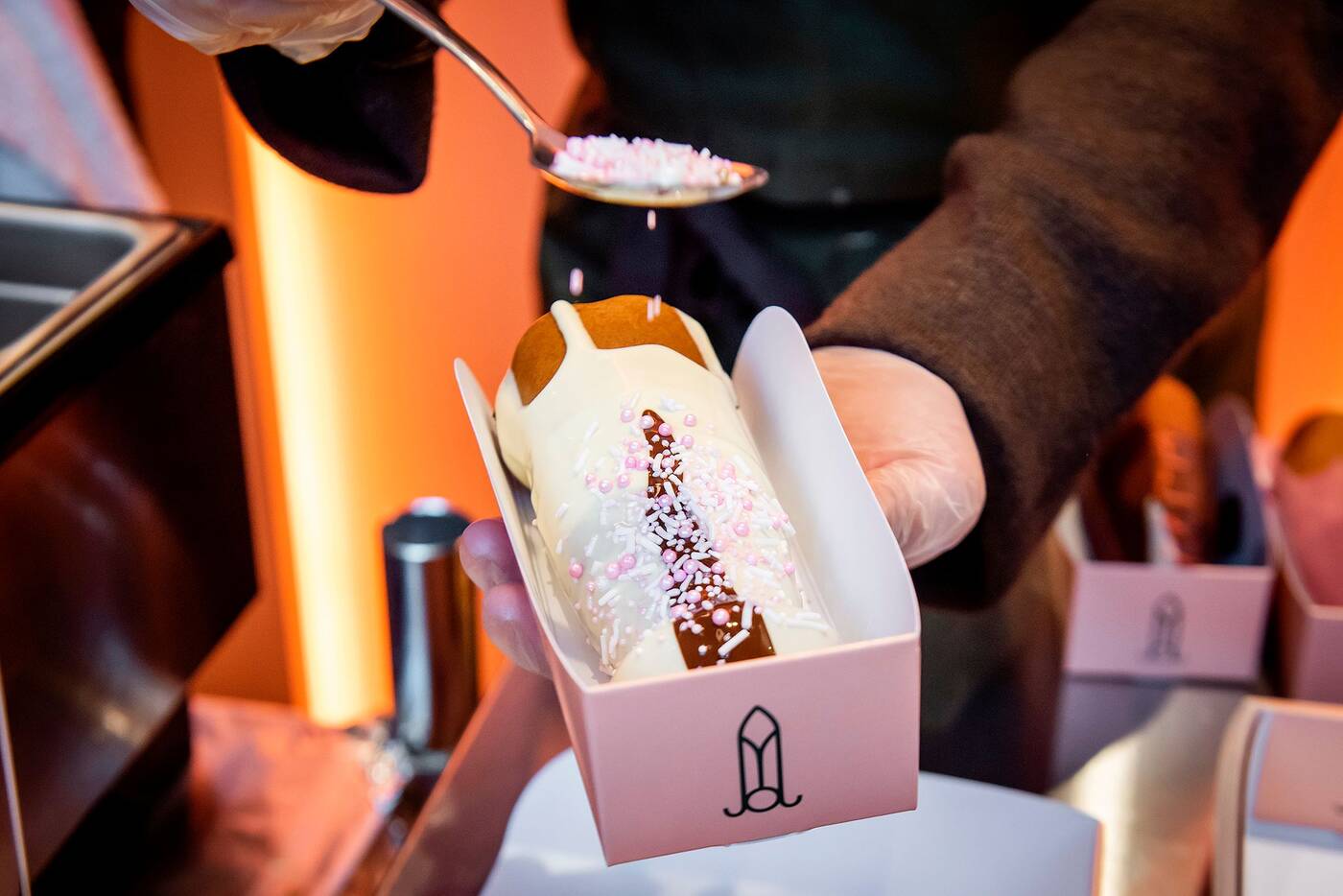 Photos of people with the comedic waffles took over social media, many coming from outside of Toronto just to see what the hype is about.

Demand grew for a more permanent location and Fan opened up a brand new storefront in December 2021. 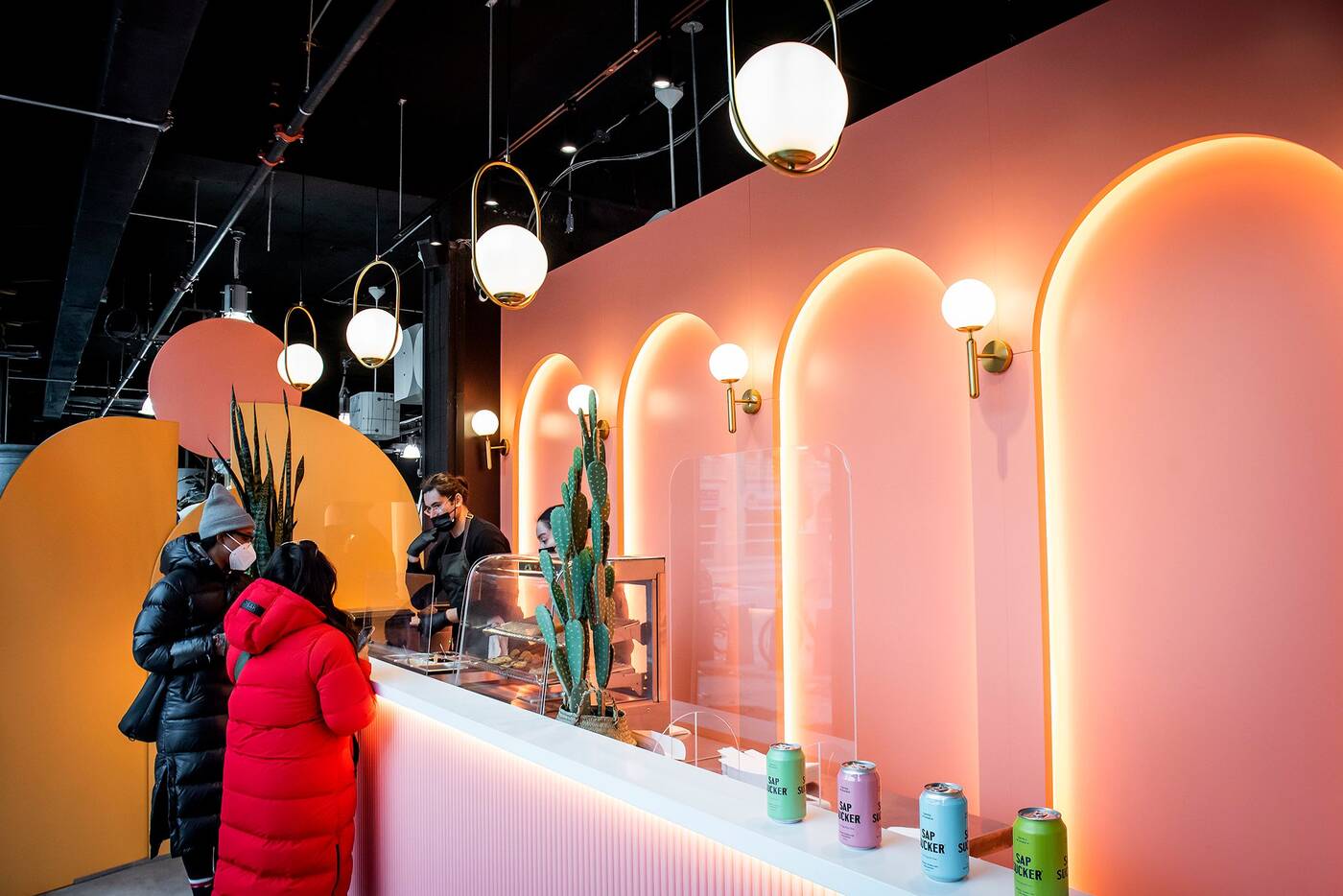 The store situated in the heart of Queen West is vibrant with pink walls and warm lighting, inspired by the feels of a vacation in Palm Springs. 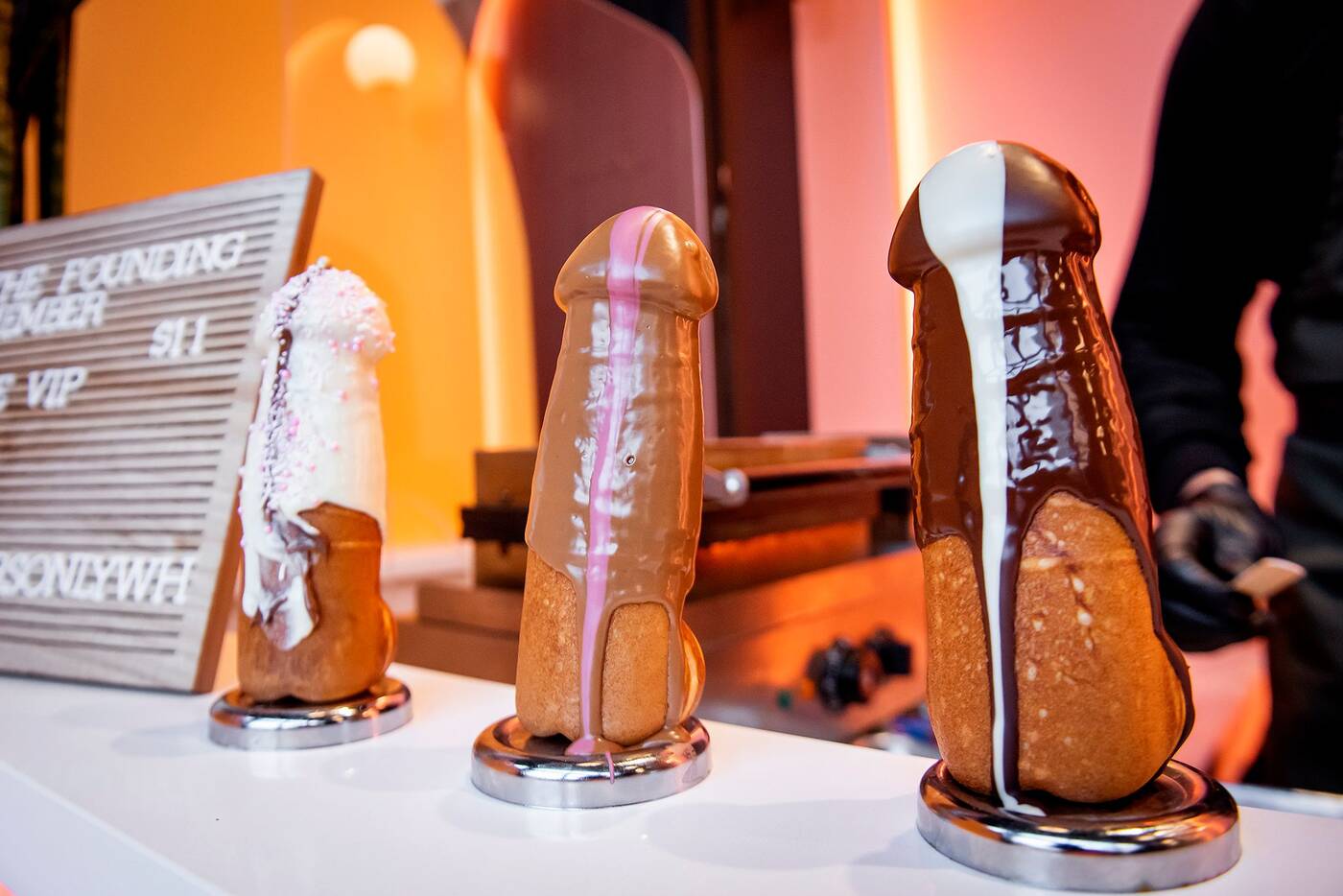 People walk inside with smiles on their faces, greeted by personable waffle makers, who erupt in joy at their arrival. 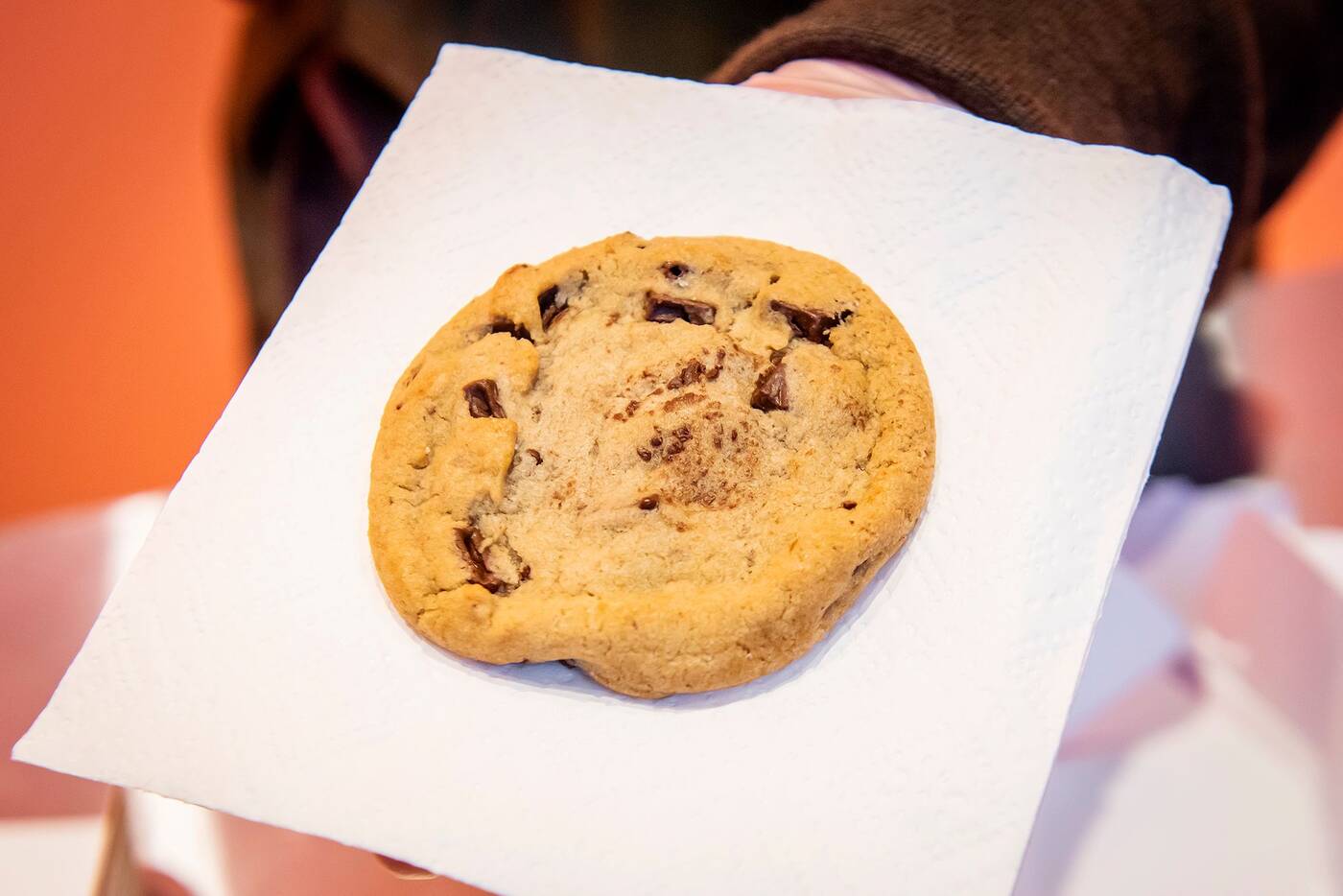 Without a doubt, they'll get a laugh out of you, nudging to jokes about the members. And if you're not comfortable with ordering one, the store stocks warm cookies given out free of charge. 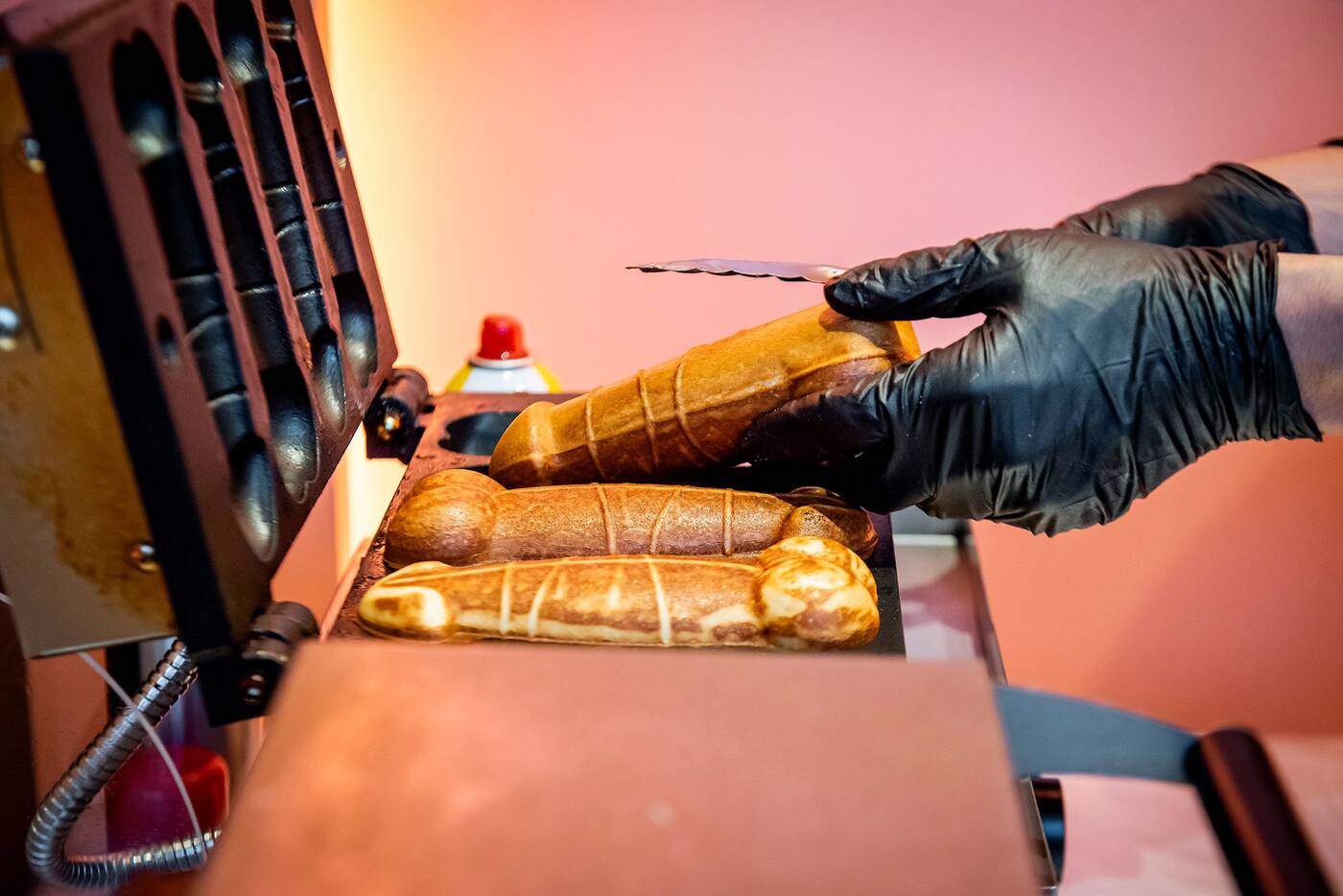 Don't worry about getting anything stale tasting, the batter for waffles is made in-house, fresh each day. 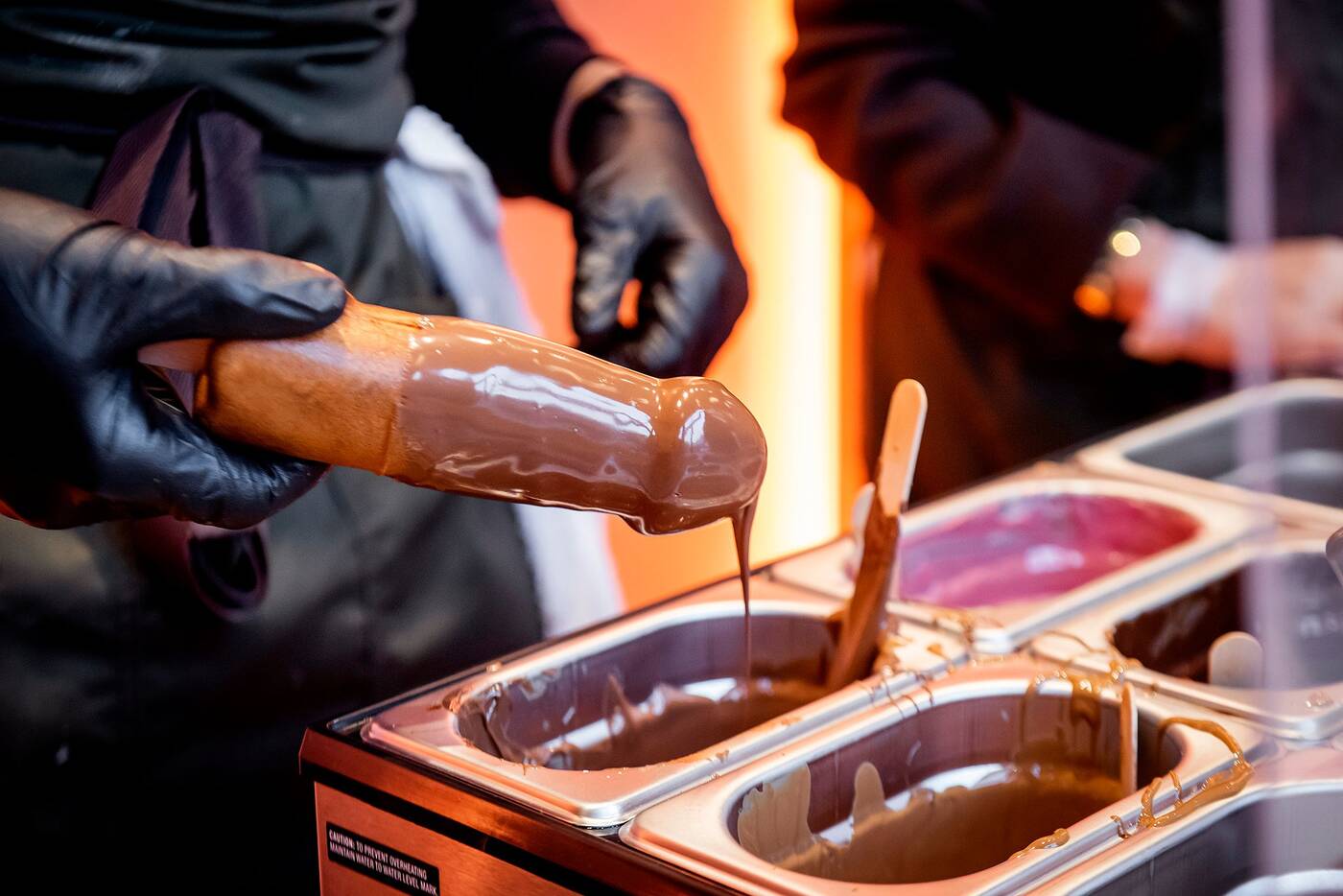 You're in charge of how you dress your member, five different Belgian dipping sauces are available, coming in white, semi-dark and milk chocolate, along with ruby pink, add any amount of sprinkles you want to top it off. 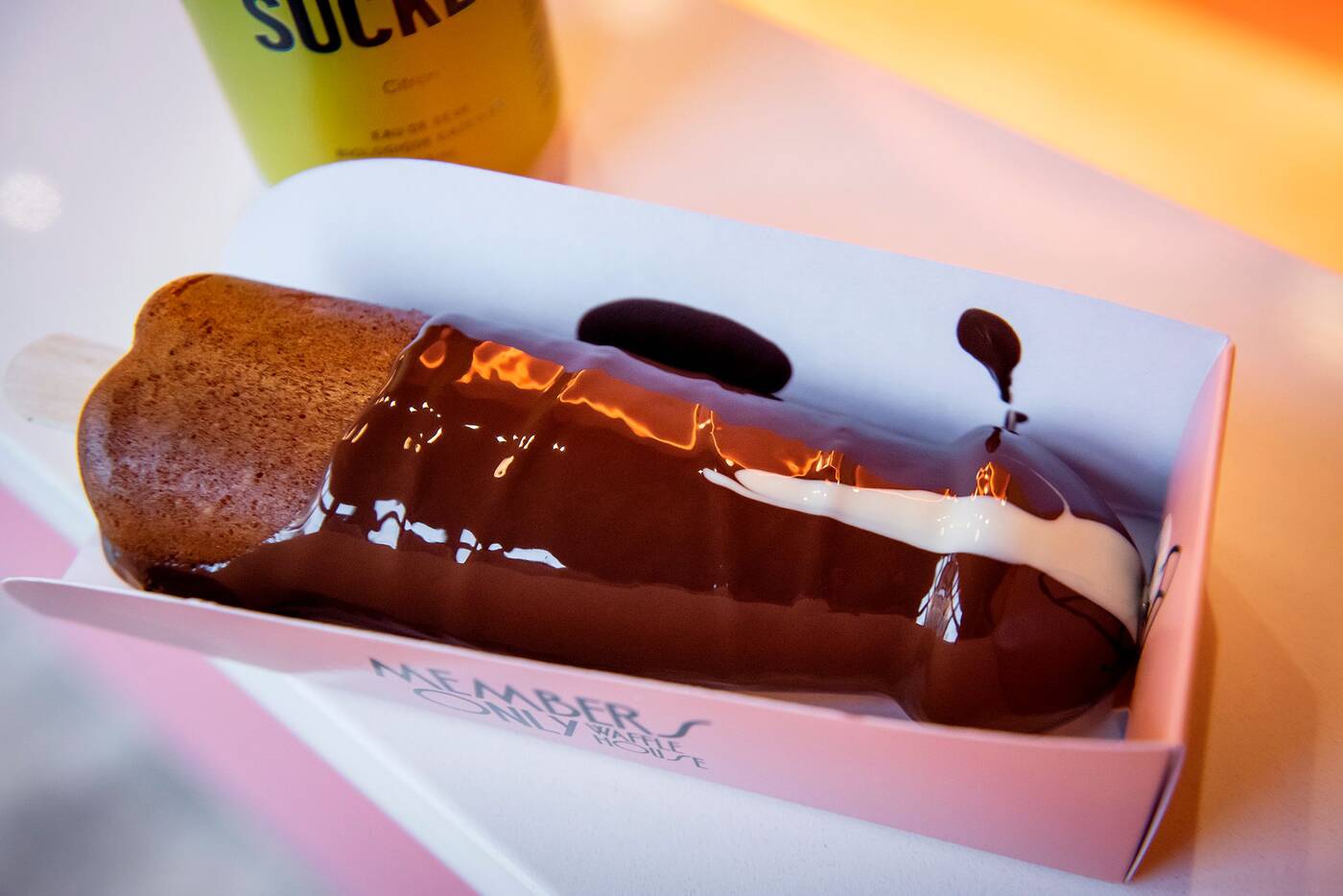 All of the waffles are priced at $11.00, this one is dipped into the semi-dark chocolate sauce, with a white chocolate drizzled on top. 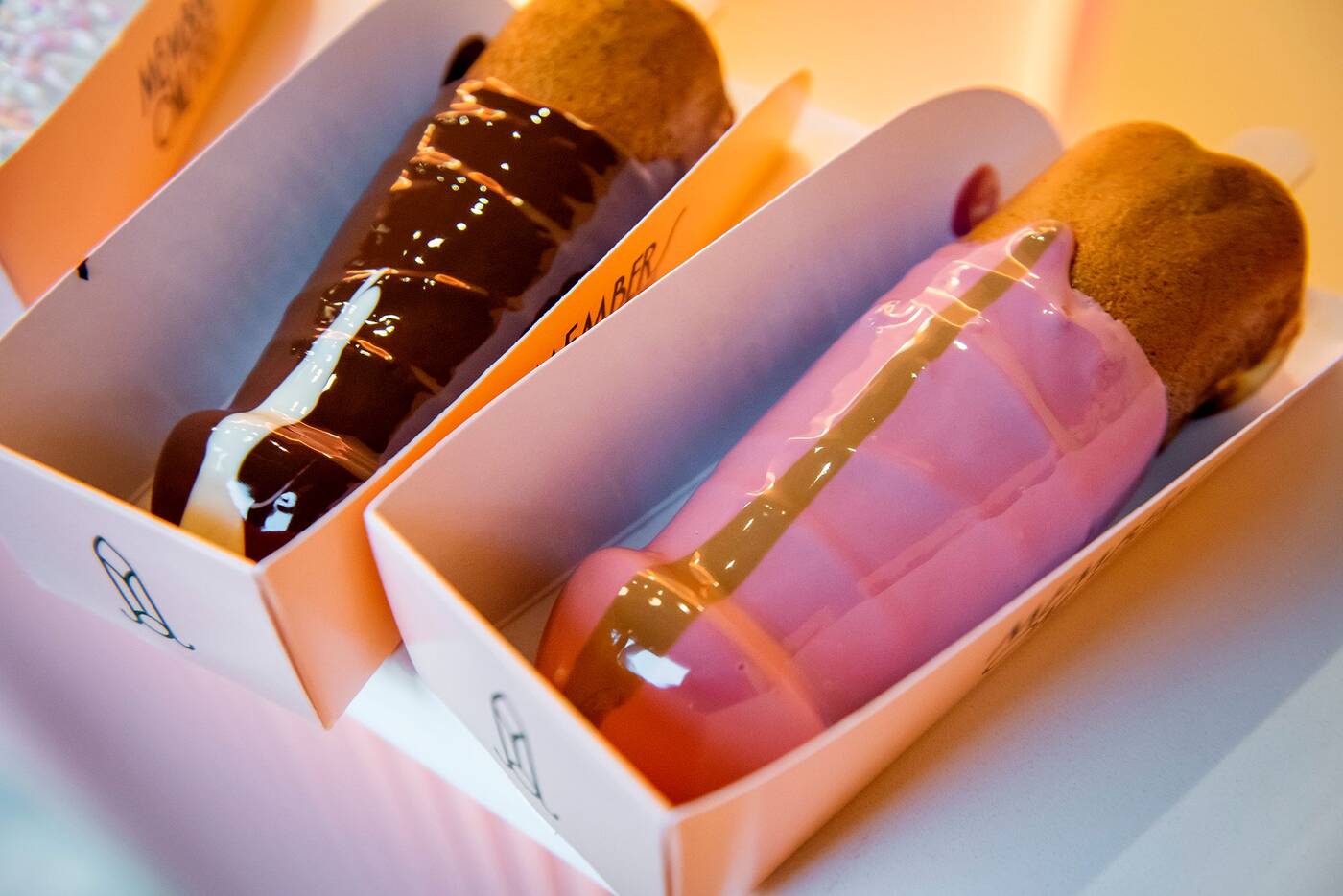 This pink chocolate dip called "The Ruby" is a favourite at Member's Only, resembling a fruity flavour, with a bit of tang. It goes well with the caramel sauce as a sweet addition. 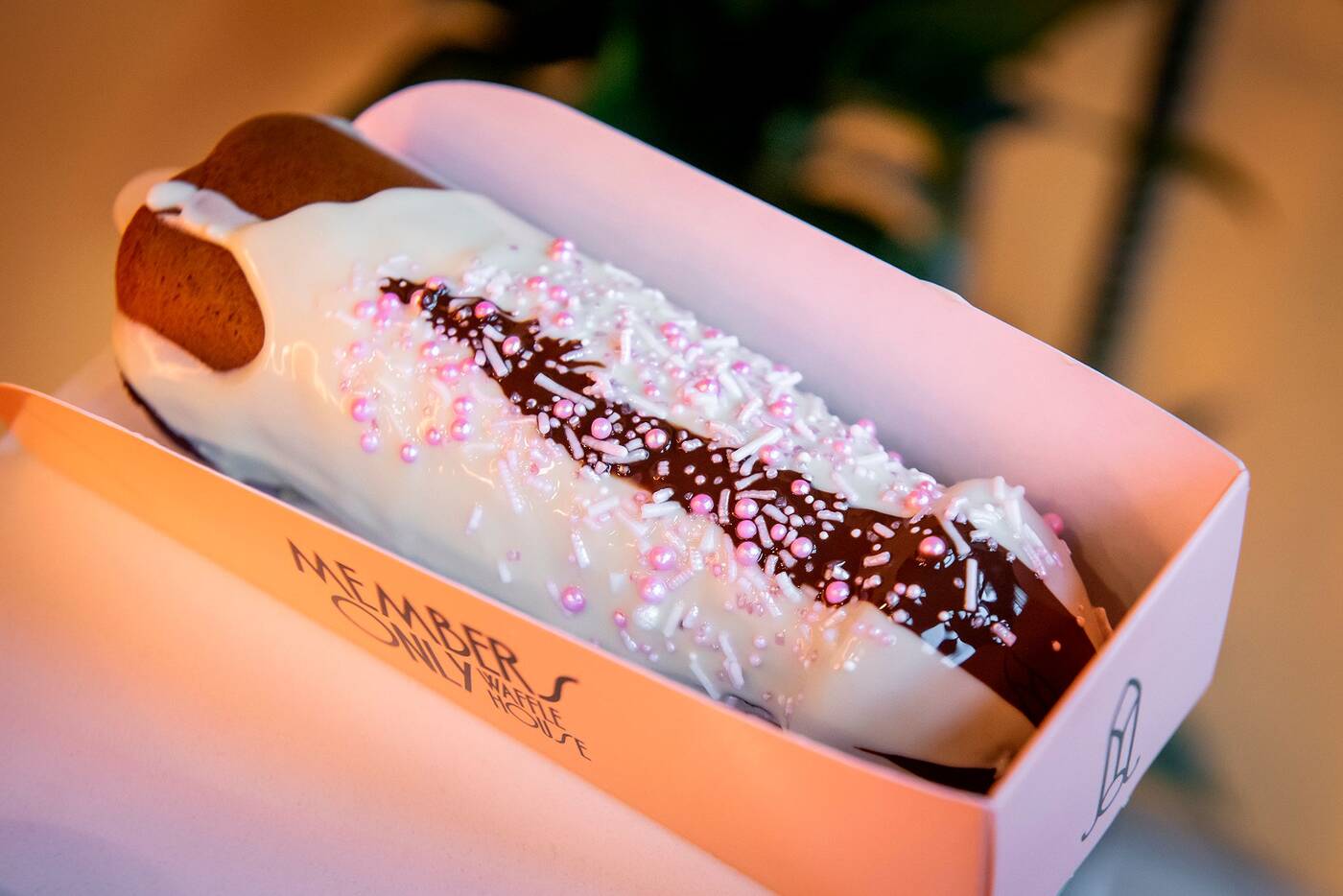 My personal favourite, the white chocolate dipped waffle with a milk chocolate drizzle and pearl-like sprinkles, sweet enough without the sugar rush. 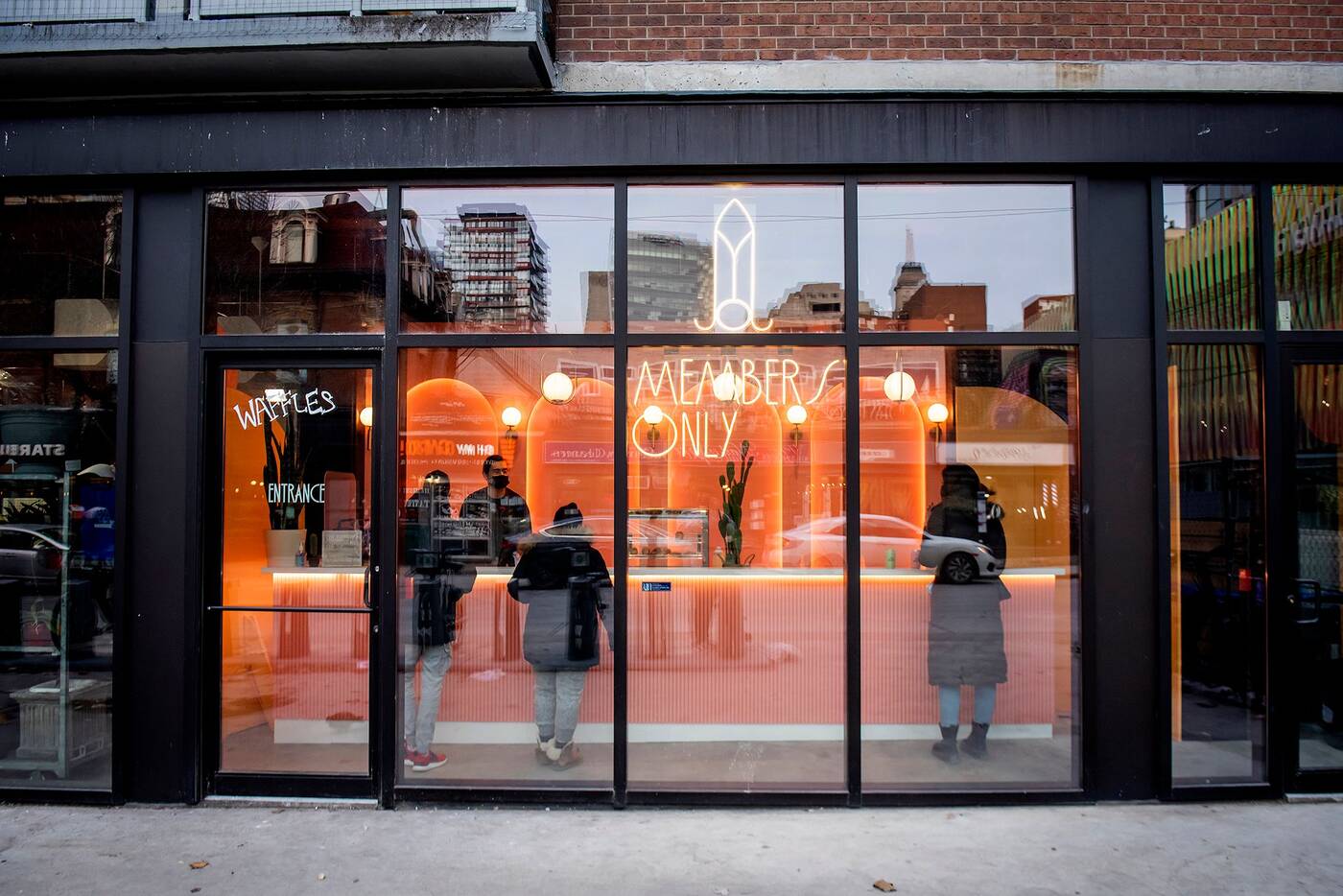 A series of large bay windows span across the length of the takeout shop at Member's Only, just steps away from Queen and John.