In an homage to 2010s hip-hop, popular Spotify playlist RapCaviar embarked on a project last year to create Mount Rapmore, honouring the decade's best stars of the genre through Mount Rushmore-style iconography.

The team selected Drake, Kendrick Lamar, and J. Cole, and crowdsourced the fourth and final member of what would become a series of four exclusive murals in select cities across North America (fans chose Nicki Minaj).

And on Thursday, the final products were unveiled via Twitter, along with the addresses of the pieces for residents to go visit and admire in person.

Fittingly, the works are located in the cities that each performer was raised in: Toronto (Drake), Los Angeles (Lamar), New York City (Minaj) and Raleigh (J. Cole, who technically grew up in nearby Fayetteville but now lives in the larger North Carolina city).

We're bringing 2010s Mt. Rapmore to the streets 📍 Find murals of these rap icons near you in NYC, LA, Raleigh, and Toronto! pic.twitter.com/t5bWH7p8FH

The colourful work absolutely pops against the charcoal brick exterior of the building, taking up the entire back wall with the four star's faces, Drake's the first and most prominent, heart-shaped haircut and all.

Trees and mountains abound in the image, which takes some obvious inspiration from Indigenous artwork in parts, and also includes an owl on a branch in the forefront — perhaps a nod to Drake's OVO branding.

There is even a little Raptor to commemorate our home team at the bottom.

The placement is a little tricky, partially obscured at certain angles by an electricity pole, but the work is still absolutely awesome and impossible to miss on a quick walk by. 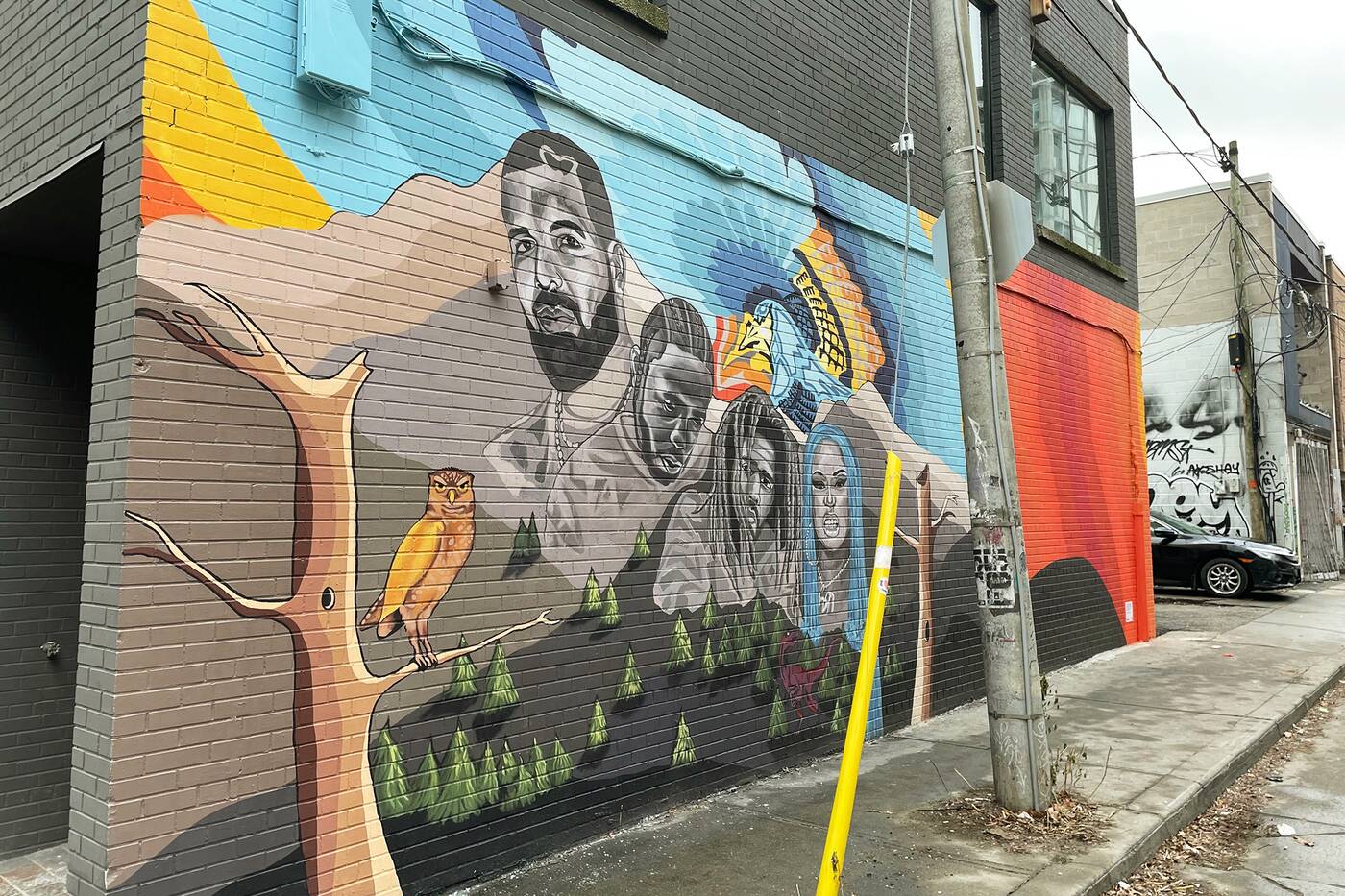 The mural can be found on the back wall of 224 Queen St. W, off of McCaul St. Photo by Becky Robertson.

More of Pollard's work can be seen around the city, such as on the exterior and interior walls of Mexican staple Campechano at Portland and Adelaide, and on the side of a building at Harbord and Manning Streets.

He's also no stranger to painting Toronto-area celebs, and has depicted Justin Bieber behind and McDonald's cash register and Drake as a waste collector in the past.

The three remaining Mount Rapmore artworks can be seen at 69 Windward Ave. in Venice (by Jacob Rochester), 57 Kenmare Street in NYC (by Anderson Bluu), and 416 S Dawson Street in Raleigh (by Jeks).