Even in the hustle and bustle of Yonge-Dundas Square, it's hard to miss Mohamd Ibrahim.

The 14-year-old, who sits in the southwest corner of Toronto's busiest intersection, looks younger than he is. Even more so, when surrounded by the grown men hawking religion and the towering screens of the H&M and the Eaton Centre. 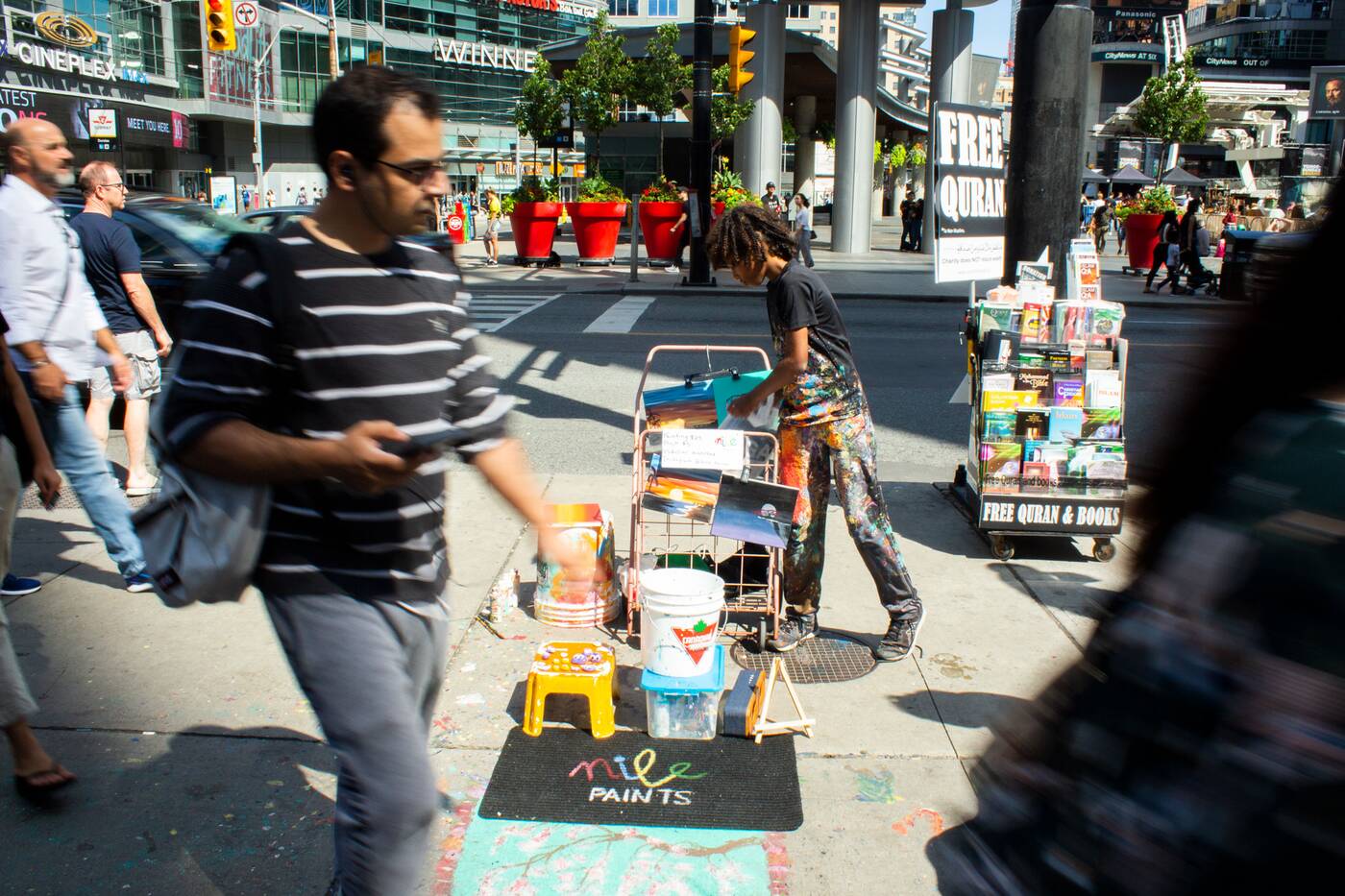 Clothes speckled with colourful arylic paints, he sits alone next his grocery cart without a chaperone in sight, hunched over his colourful paintings most days from afternoon until evening.

Known as Nile Paints on Instagram, where he currently has over 29,000 followers, the young artist has become somewhat of an Internet sensation, and not just for the fact that he's easily the youngest hustler on the block.

Thanks to a short video interview from a page called Story of Toronto, which was quickly shared by accounts worldwide, Mohamd has officially become a welcome, quiet fixture in the hellscape of drummers and tourists.

"What I said attracted people, I believe," says Mohamd. "Being famous was not on my mind."

Well-spoken, with off-the-metre charisma levels, Mohamd has a tendency to erupt into motivational "never give up" spiels like a young Tony Robbins. He has big plans for a restaurant, real estate, sports clubs, an art gallery — it'll all be part of the Nile Paints brand someday.

At this point, I wouldn't be surprised if he does; Mohamd has been at it for almost a year, selling abstract acryclic paintings, Toronto skylines, and Arizona can-inspired florals for $25 a pop. 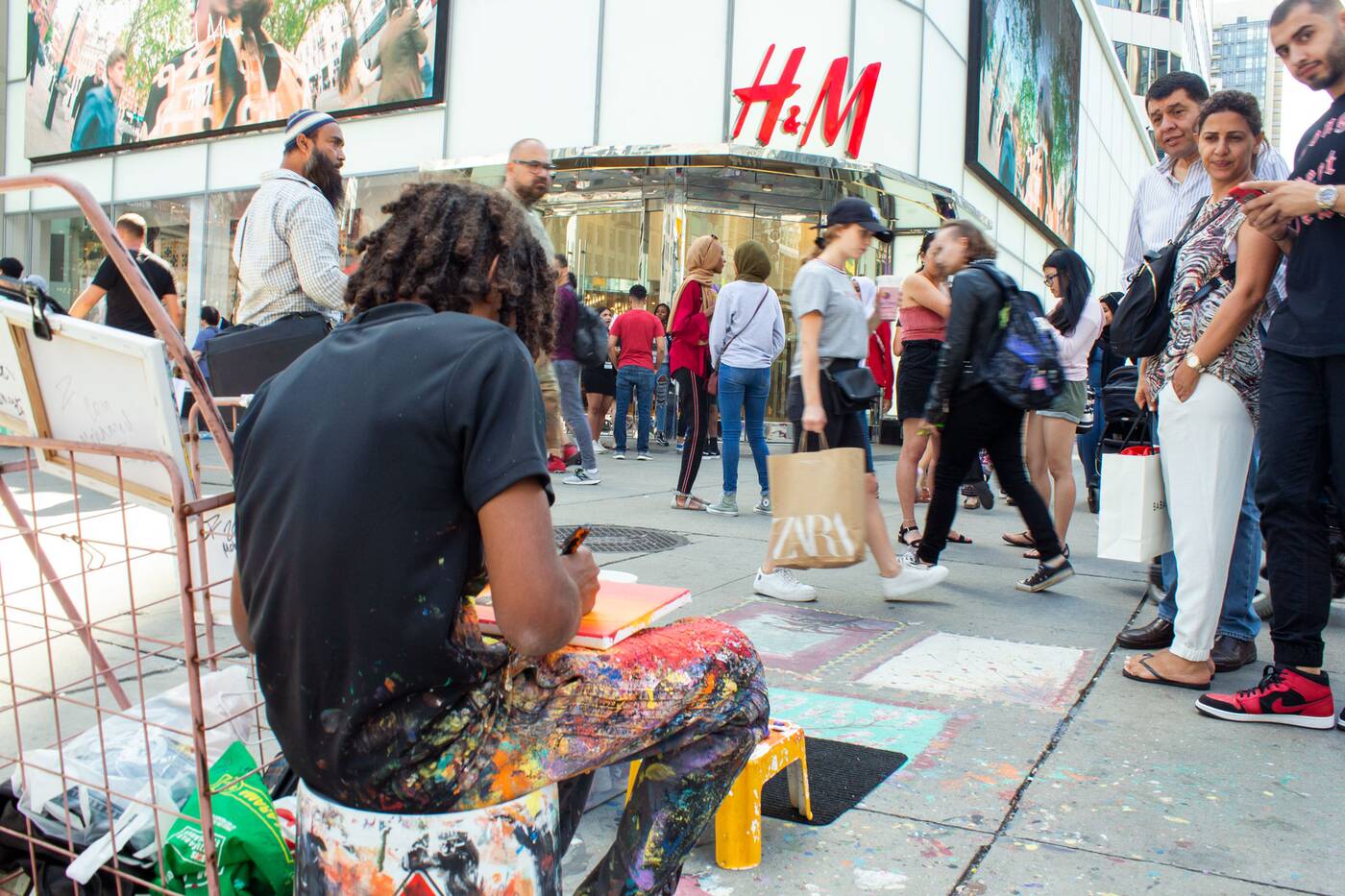 He's functioning without a permit, and so far, that hasn't stopped him. He's too young one to get one anyway (apparently you need to be at least 16) and law enforcement generally leaves him alone, unless someone calls the cops on "the child just sitting there," which has happened before.

More recently, he's added small spraypainted rocks ($5 each) that he gets from the Don River. He says he used to source them from Trillium Park, but stopped when he found out the rocks were fake. 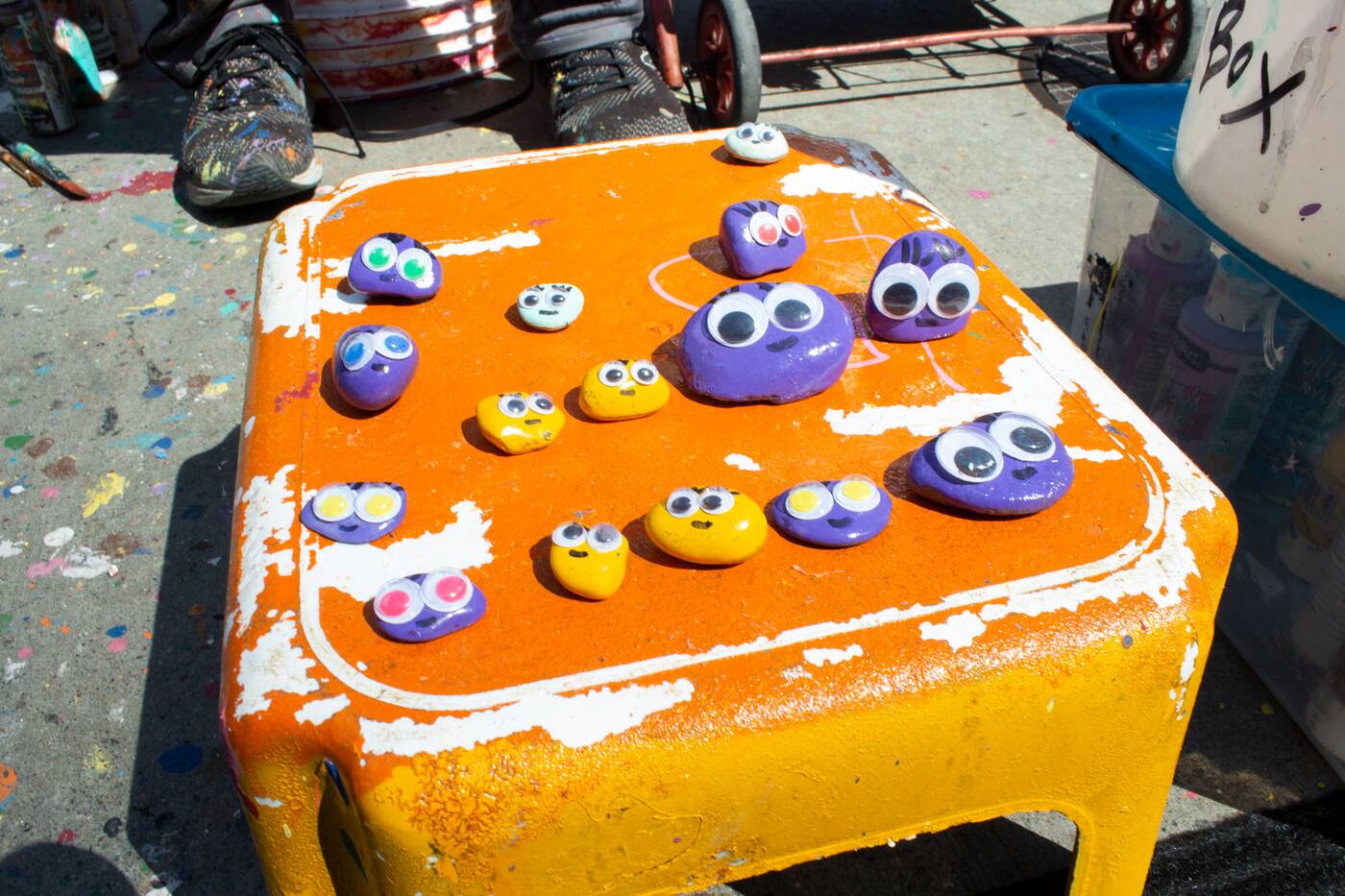 Before that, he was selling water bottles at Victoria Park and Sheppard, close to where he lives, then shovelling and mowing lawns in the neighbourhood.

With the money he made, he bought himself canvasses and some paint, starting off with a picture of a sunset and an Instagram account under the handle Painting924.

He's made several upgrades to the brand since then. The name has changed to Nile Paints, and he's introduced some branding to his stake in the pavement with a rug and some floor drawings. Earlier this week, he bought speakers to attract more people, with hits from Drake and the like.

"You have to every time upgrade," he says. 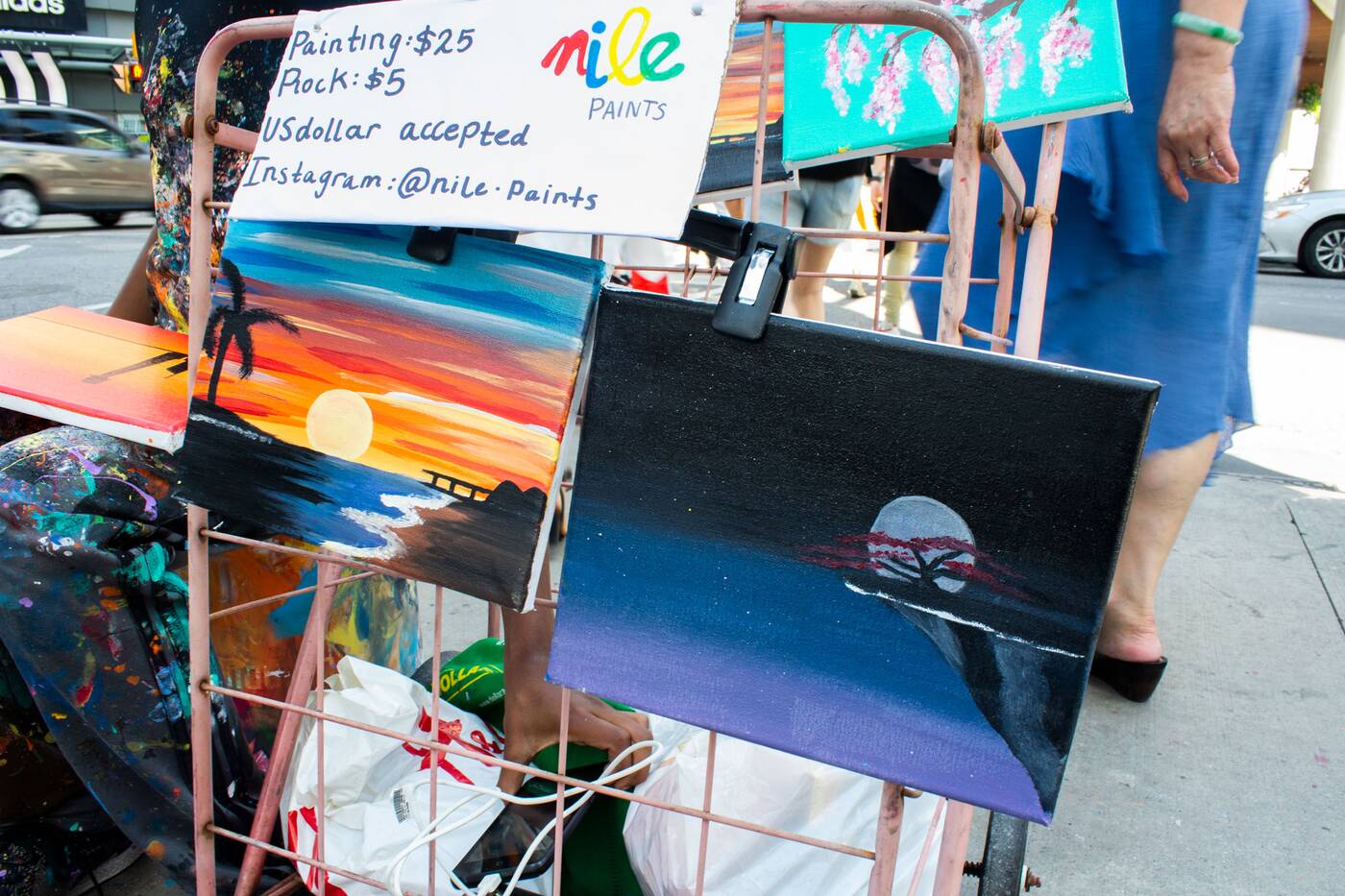 The business accumen is so impressive, it's hard for passers-by to wrap their head around the idea of a kid with agency. Even as we speak, we're interrupted several times by people asking where his parents are, and what his back story is.

"I do this on weekends, and at summertime," he says."I'm not homeless, I do it for fun, I do it to make money...I live a normal life." 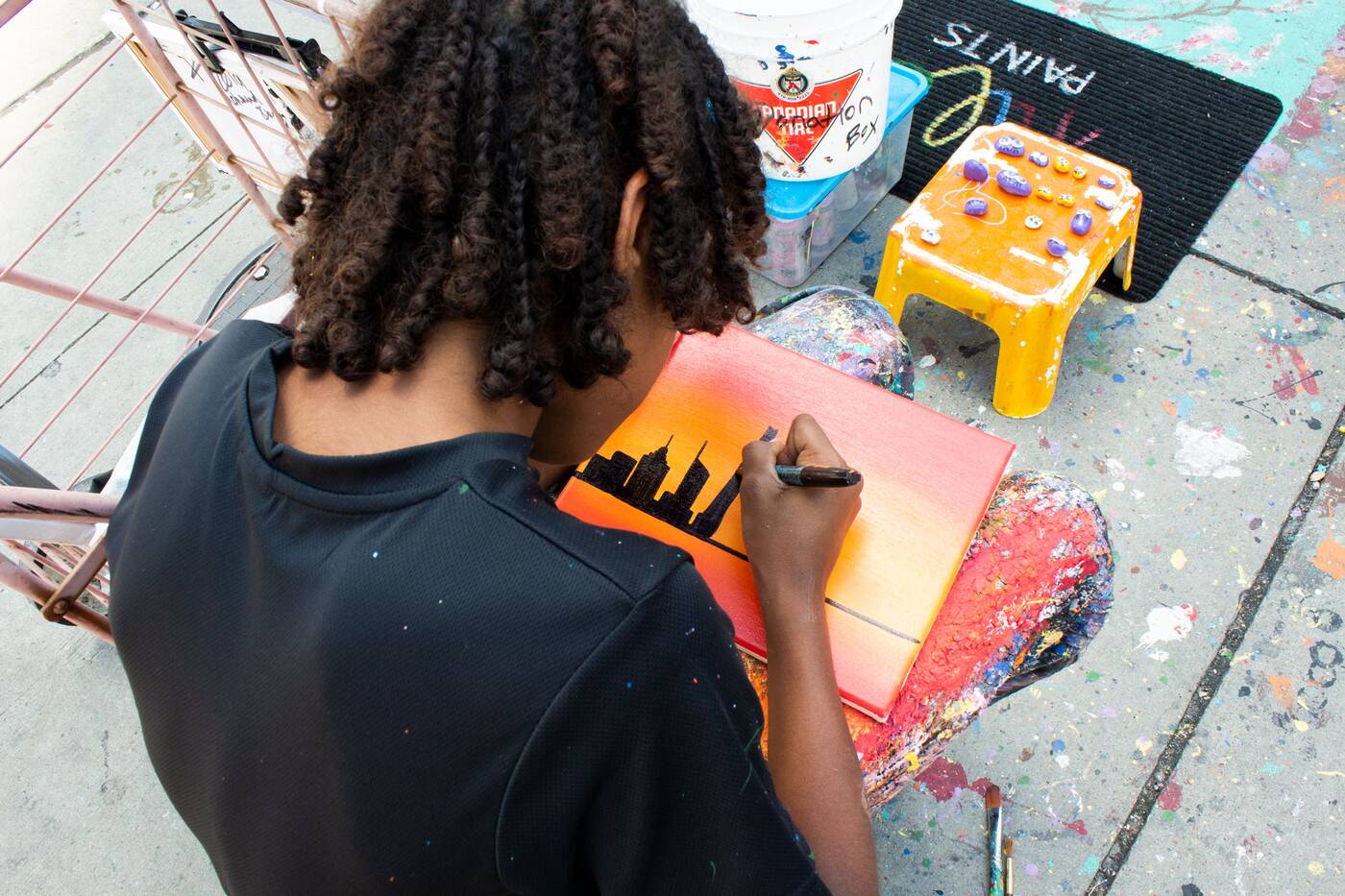 Living with his mother and siblings, Mohamd, who is of Sudanese descent, says they immigrated several years ago from Abu Dhabi, where his father still works.

He starts grade 9 at Sir John A. MacDonald soon, meaning he'll be limited to weekends in the fall. You won't find him at all during January and February, when it gets so cold that his paint freezes over.

He'll have an online business by then, in case you still want to support the young entrepreneur, who, at this point should just trademark the phrase: "Never give up in life." 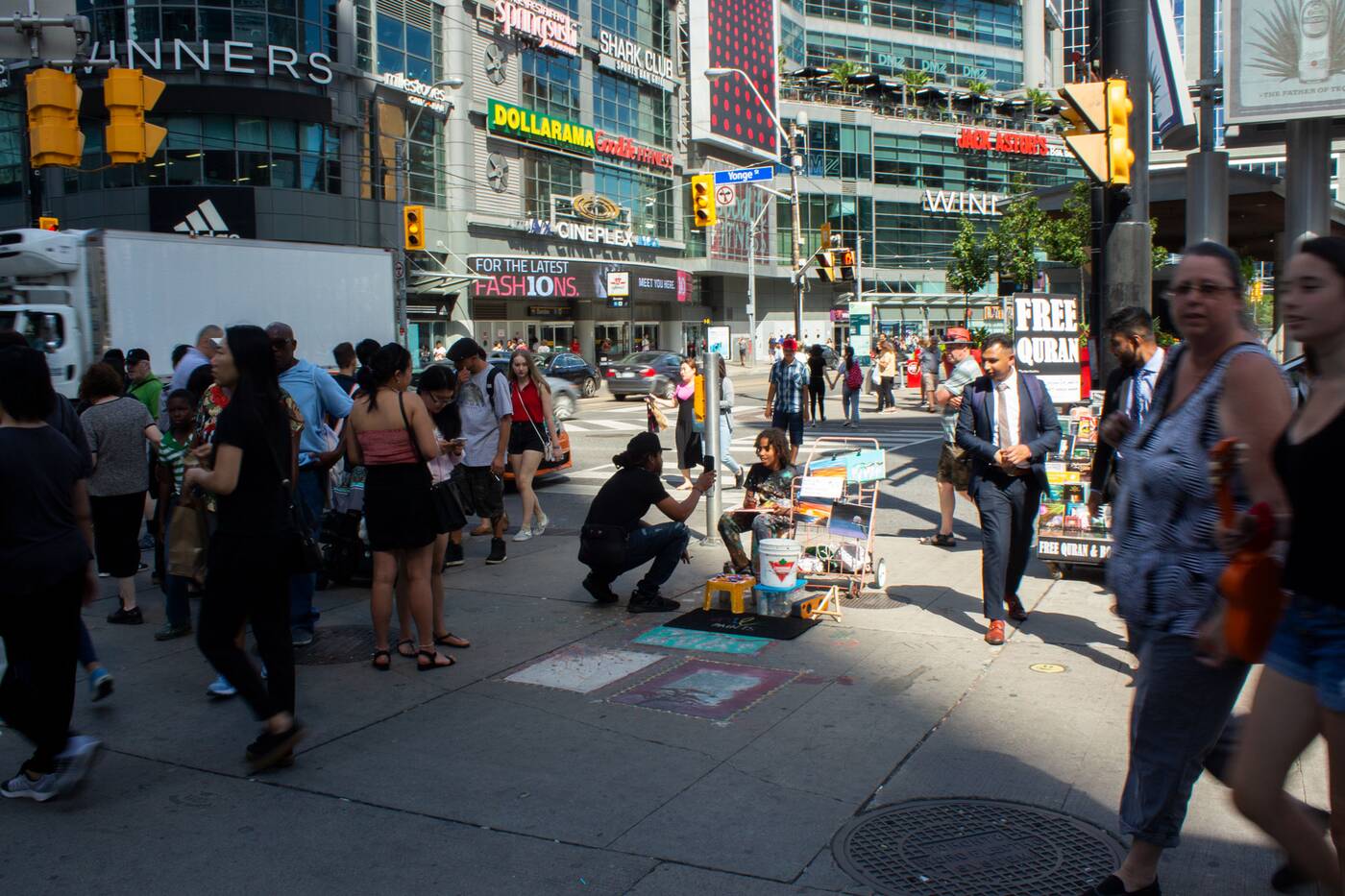