Downtown Toronto is filled with places suitable for hosting swanky events. But a brand new one is appropriate for both exclusive soirees and grassroots theatrical productions. That's because Artscape has now opened up its fifth location in Toronto.

Artscape Sandbox, as it's called, is located right beside Montecito at the base of the Daniels Cinema Tower on Adelaide. Event and sales manager Jason Chellew describes the 6,000 square-foot, fully-accessible space as a blank canvas.

Chellew takes me on a behind-the-scenes tour; he estimates that he's done nearly 750 thus far. As we stroll, he tells me that Artscape Sandbox is zoned as a theatre. 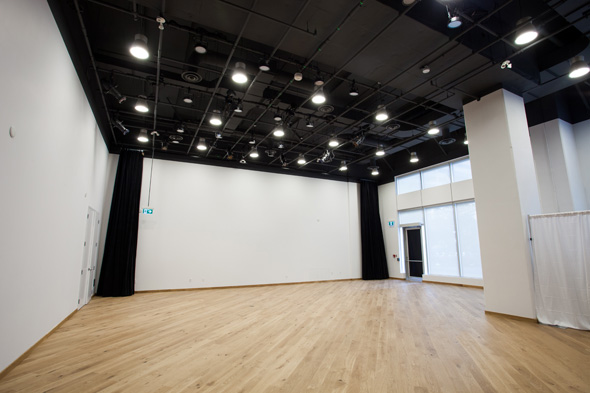 Fittingly, the 4,800 square-foot backspace can be transformed into a full black box theatre with a plethora of lighting and sound equipment. It also works for weddings, galas, product launches and other corporate events - Chellew's already accepting bookings into 2017.

Since Artscape is a social enterprise, it's those big events that let artists access Sandbox at more affordable rates. "This place is for artists," says Chellew. "The majority of what we do is performance-based here."

As part of its Creative Initiative, for instance, five artists will get to rent the space for just $1 per day. There are a total of 34 days blocked off in 2016 for those participants.

Currently, the space is living up to its playful name. Director Michael Wheeler is occupying it for the next two weeks. He's putting on a production of Caryl Churchill's Objections to Sex and Violence and he and his team have filled their make-shift theatre with fake sand. 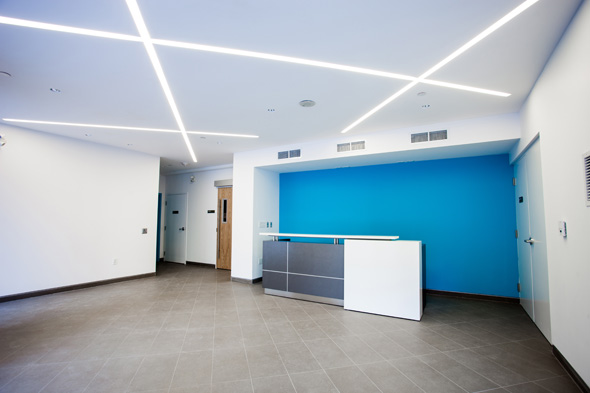 Back stage, there's a small green room with makeup stations as well an industrial fridge. There's also a permanent back bar, but to use it, clients will need to secure their own Special Occassion Permit. As a perk though, there's no corkage fee. Chellew notes that anyone who rents Sandbox gets it from 7 a.m. until 2 a.m. the next day.

Unlike other Artscape facilities, such as Artscape Youngplace, this one is rather sparse. That's because it can change depending on who's renting it. "It's so adaptable," says Chellew. He sees people coming up with fantastical ways to transform it. The bathrooms, however, are always whimsical because they're filled with original art, such as this one by Walter Scott. It's part of the Brief Encounters Installation. 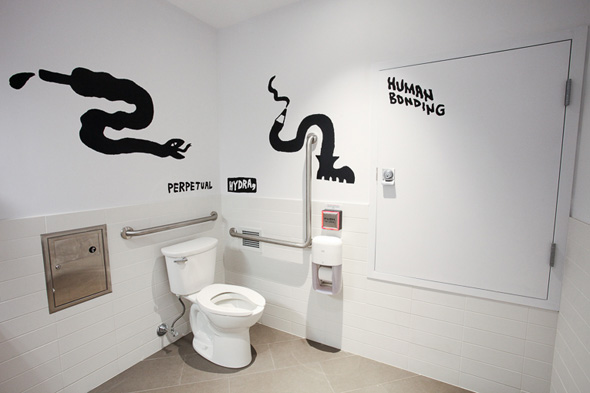