When the Chapters flagship at Richmond and John closed down in April, questions immediately began about what would take over that enormous, three-floor slab of prime downtown real estate. Rumours persisted that the space was being eyed by Michael's, a North American chain of craft supply and framing stores, for a downtown location. Looks like it's official; signs are now up in the window of 142 John St. announcing the craft shop's impending arrival.

It's not a terribly sexy retail addition to the strip - a shop stocked with embroidery hoops and silk flowers lacks the cachet of, say, a Uniqlo, or a Uniqlo. But the selection and convenience of a big-box shop will likely be welcome to many downtown crafters: Though Toronto has plenty of specialty shops for art supplies, beads, and fabric, and OCAD's population is already well-served by DeSerres and Aboveground Art Supplies, Michael's promises to be a true one-stop shop, with a focus that ranges from baking to scrapbooking to knitting to woodworking. 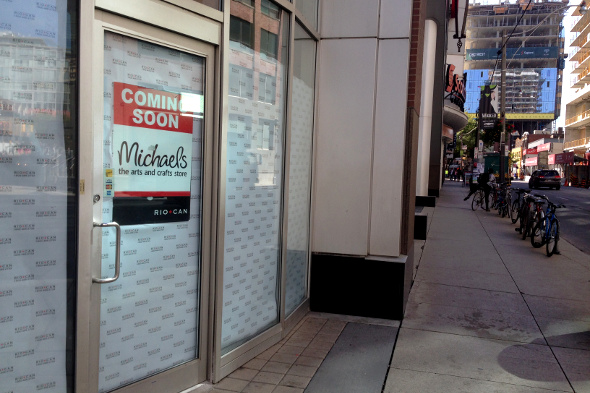 There's no opening date announced yet for the new shop, which will join existing area locations in North York, Scarborough and the Stockyards. Will local artists change their shopping habits? (Does being stuck behind some granny paying for her crochet needles in pocket change count as suffering for art?)