Contra dancing in Toronto is not just for squares

Contra dancing has its roots in the structured and mannered English and French court dances of way-back-when, and that's all I knew when I shuffled into St. Barnabas Church Hall on the Danforth. While contra dancing has fallen in and out of vogue throughout the U.S over the last century, it remains a staple in most university towns. In Toronto, however, there's only one group putting on regular contra dances: The Toronto Country Dancers.

So, what is it? Contra comes from the French contre, meaning against, and describes the two parallel lines of partners that face each other and interchange. Where square dancing sees 4 couples in a square formation, contra affords you the opportunity to experience a brief fling with everyone in your line. The music is always live and typically folk-based, and an on-stage "caller" teaches the dance before it formally begins and calls out reminders throughout; if your footwork fails you, they'll spot and correct it. Women are ladies, men are gents, but same-sex couples and ambiguous gender roles are fully embraced. 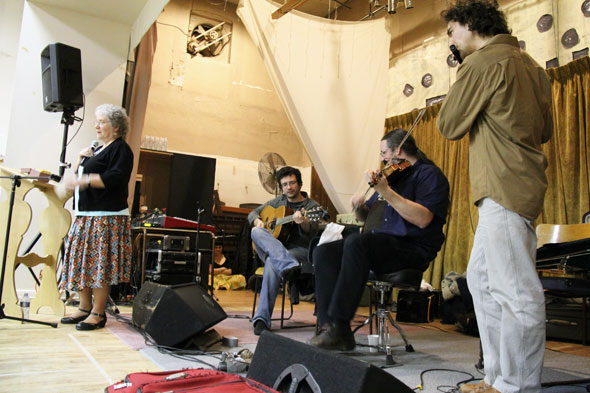 Saturday's event drew an unusually large and multi-generational crowd due to the three-piece band, Genticorum, whose Quebecois folk sounds drew hearty whoops from the crowd. There's a strong sense of community, and more than anything, it's what drew me in.

Shona, whose parents were among the first to bring contra dancing to the city, and has attended many of the Toronto Country Dancers' contras says that she loves "the strange mixture of people, as well as the adrenaline rush."

Over the course of the night, I met bakery owners, professors and musicians, but be forewarned: although there's usually a handful of twenty and thirty-somethings, the crowd does steer towards an older age range (50-60). Despite that, the atmosphere is refreshing for its utter lack of douche-baggery and the un-self-conscious nature of the dance. After just a few minutes, I could attest to the euphoria that comes from being spun around by strangers, as well as the sense of accomplishment from having mastered the sometimes intricate steps. 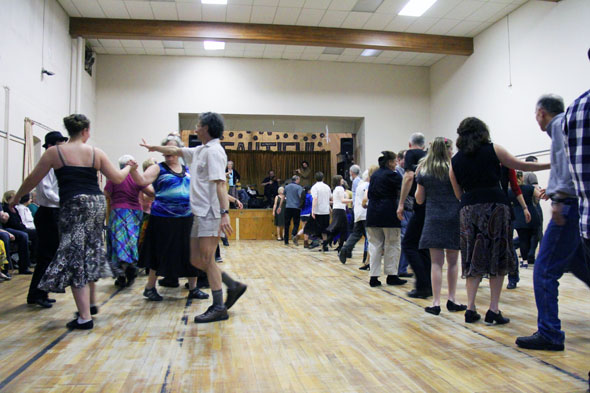 I brought a partner, but we were split within minutes--you should expect to be asked to dance, and experiencing so many partners taught me that I'm a natural at swinging, but hopelessly inept at remembering to promenade (in which the gent parades his partner in a circle).

I agonized a bit over what to wear, worried that my tank top and pleated skirt might be unseemly in a church setting, but there's no dress code in effect. The organizers do suggest that you bring a spare pair of shoes, and remind you that the event is unlicensed and alcohol-free.

Tickets are $10, but first-timers fill out a card with name and e-mail to claim their next class for free. The Toronto Country Dancers' events have been held at St. Barnabas since 2004, and the group's upcoming big event is the Toronto Spring Thaw, a weekend of contra and country dancing from April 13-15. Elsewhere in Ontario, the Hamilton Country Dancers and Peterborough English Country Dancers run regularly scheduled events.