Robert Lepage's Eonnagata, which opened last night at the new Sony Centre For The Performing Arts, is a wonderful mishmash of dance, opera and theatre.

Lepage's creation tells the story of Charles de Beaumont, Chevalier d'Eon, an 18th century French diplomat, soldier and spy. Being a secret agent in the time of Louis XV couldn't have been easy, especially for a young woman. The true gender of Chevalier d'Eon -- even after his death -- was constantly speculated, as he employed cross-dressing to successfully carry out his missions. Chevalier d'Eon's character even spawned an anime series about four years ago.

Eonnagata (pronounced EE on nah GAH tah) gets its title and some of its visual and thematic inspiration from Japanese Kabuki theatre, where male actors play female roles. The entire show is performed by Lepage, Parisian star Sylvie Guillem and choreographer Russell Maliphant. It also features elegant costumes by the late fashion designer Alexander McQueen.

Eonnagata is quite the feast for the senses. It dares to go where no theatre, opera or dance show has explored on its own. The dancer gets to speak and the director gets to dance. While I could do with some shorter dance numbers -- especially in the first third of the show -- the lighting (by Michael Hulls) and sound design (by Jean-Sebastien Cote) kept me engaged pretty much throughout the 90-minute production. 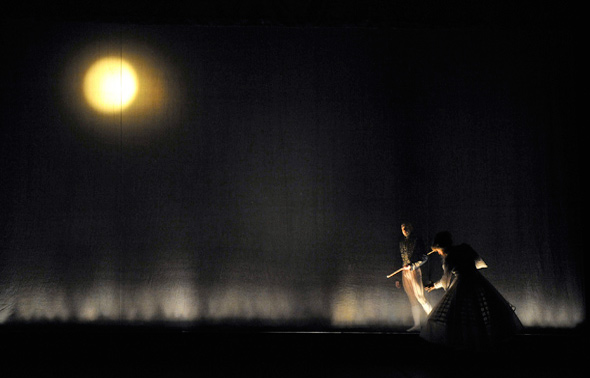 Most of the expansive Sony Centre stage was kept in darkness, while the performers were brightly lit, using sparse props that transformed as the scene changed. For example, a sturdy table easily became a horse-and-carriage.

Like Lepage's Lipsynch, which I had the pleasure of seeing during the Luminato festival in 2009, this is a show that weaves in several stories, told through movement, lights, voice and some text. A minor annoyance was seeing the English subtitles to most of the French dialogue go by much too quickly. Unless you're fluently bilingual, you're likely to miss a bit of the storyline as a result.

Eonnagata was first performed in 2009 and has since toured France, Spain, Germany and Singapore. The Toronto engagement lasts just two shows.