Luminato has been pushed to the back burner a bit this year. Then again, the city has had a lot on its mind. World Cup. NXNE. And that little thing called the G20. But as Toronto's week-long arts festival comes to a close, I took in a small swath of exhibits and picked some of the stand-outs, all of which can still be seen today. 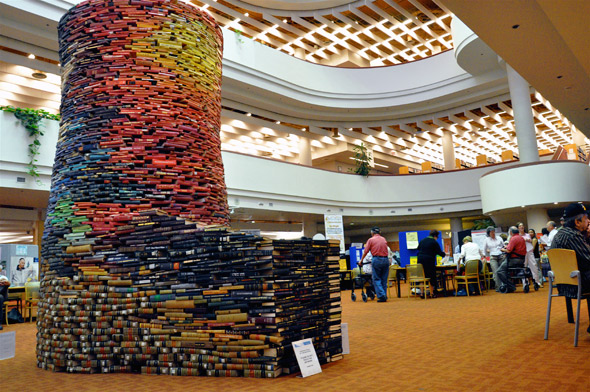 What better to do with a library chock-full of books? Ah, that's right - make them into a two-storey sculpture. Bingo. Situated in the centre of the Toronto Reference Library is a cumbersome piece of book art. 15,000 bricks containing words (aka. books) have been meticulously placed by Tom Bendtsen. The artist is about "re-establishing meaning," which thus, continuously offers way for new creations. 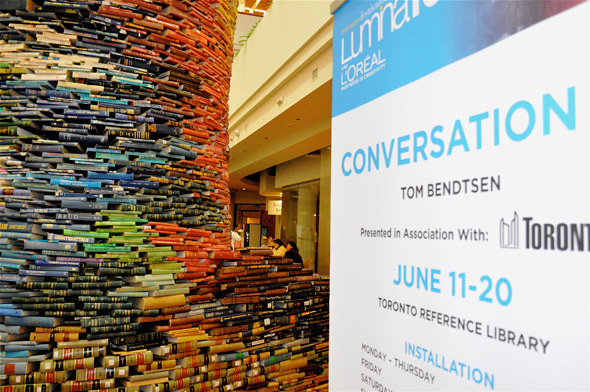 For Bendtsen, that has translated into displaying books - an absurd number of books - into colourful, abstract works of art for the past 16 years. Case in point, literature itself could be considered art, and he thus re-establishes a certain meaning by displaying the book covers in sculptures. In his most recent book towers, Bendtsen lets colour dictate where books are placed leaving the historical connections and subject matter to serendipity.

The Ascension of Beauty - Mark Fast 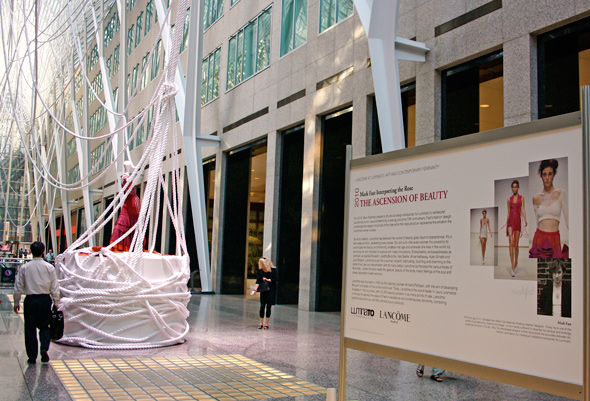 Mark Fast isn't so much an artist as he is an esteemed fashion designer, namely in knitwear. The Winnipeg-raised, Britain-residing designer took over the financial district's Brookfield Place to hang some two kilometres of rope throughout the high glass ceiling. With an elaborately posed mannequin draped in a knit red dress - this is supposedly to symbolize a rose, femininity - she (emotionally) overlooks the tangled sea of thick white rope dangling through the building. Watching passerby navigate the symposium was enlightening as many would pause, look up and try to figure out what was going on. After some befuddled faces passed, camera phones made a strong appearance at this installation. 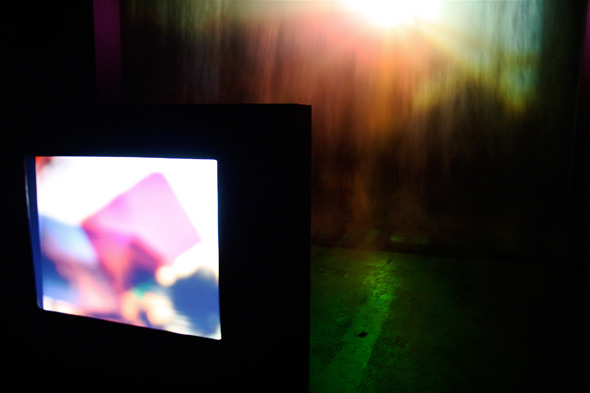 Atom Egoyan's name was a strong draw for this show. But it should have been for the late David Pecaut, the co-founder and co-chair of Luminato. Egoyan befriended Pecaut and stayed in contact (mainly via e-mail) when Pecaut fell ill last fall. As a tribute, Egoyan commissioned his former student, Mani Mazinani to create a piece inspired by Michael Snow's simple, yet idyllic "Solar Breath (Northern Caryatids)" exhibit.

Snow's video installation from 2002 is a 62-minute loop of two curtains blowing in the wind. Although that sounds ridiculously artsy and simple, there's a lot more to it than that. Sitting in the small viewing area, the sound of the curtains, but also the clinking of cutlery is heard from an unseen family, presumably eating. When the wind blows the curtain inwards, a solar panel can be seen perched on a table outside. The fixed-camera exhibit displays the beauty in attention and the satisfaction found in everyday art. 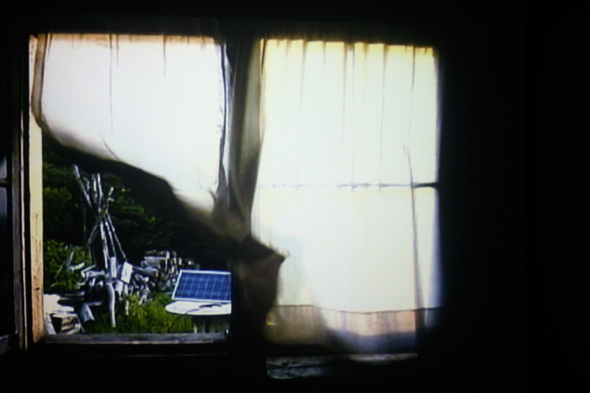 Mazinani's response to Snow's piece, "Light Air," was inspired by the last few letters that Pecaut wrote to Egoyan. Walking into a back room of the exhibit, the viewer is struck by fanciful coloured lights dancing off a wall of mist. As you enter through the mist wall, another looped video is playing. The crackle of a fire, the breeze of a fan and the coolness of the mist, which has the various electric colours projected onto it, is a subtle test of the senses. The video, which is ever zooming in and out, never focusing, plays on sources of light. Looking out on a lake, a fire is burning, the sun is shining, and various coloured filters are placed in front of the lens. It's left for the viewer to translate the similarities between the two exhibits, and then to relate it all back to Pecaut.