Team Macho: Kitschy, Gay and Over in A Second

Kitschy, gay and over in a second... at least according to one lady, who just didn't get it. However, Team Macho, unfazed by this dismissive feedback at a recent event, have incorporated it into their latest show which opened this week at Magic Pony.

Kitschy, Gay and Over in a Second is the fourth solo exhibition by Team Macho hosted at the local toy shop, and delivers another round of deliciously dark tongue-in-cheek illustrations from the team of five Toronto artists - and frankly, they don't really care whether the audience gets it or not. 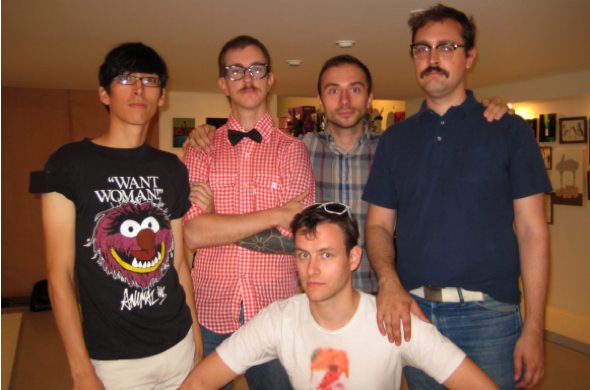 The Team's attitude reminds me of the edgy, offensive humour I hold so dear, but the highly narrative Macho style seems to fit graphic novels more than fine art. Comprised of friends Lauchie Reid, Chris Buchan, Nicholas Aoki, Jacob Whibley, and Stephen Appleby-Barr, Team Macho have applied a distinctly modern edge to their foundations in illustration.

But it's hard to define their style without referencing other forms of kitsch, if only because of the dark tongue-in-cheek nature of their work. If you enjoy mildly offensive, cleverly juxtaposed humour like Wonder Showzen, you should get a big kick out of Team Macho's art.

However, don't let the hilarious undertones of Team Macho's work fool you. Kitschy, Gay and Over in a Second is meant to be taken in the same vein as much of their work, and all five members come off as very serious artists when it comes to creating. Graduates of Sheridan and OCAD, there is no doubt that this team is talented. Having started in illustration, they soon found that was too limited. Now their work incorporates many different mediums, although they are admittedly anti/a-digital, and snub the mass-production of art on the whole.

They came off as somewhat purist in nature, and I admit I was surprised to find that none of the work is ever produced via digital medium. Every single image is painstakingly done by hand, by the artists. The pieces are sometimes an individual effort, but often multiple artists will collaborate on one piece. Still, Team Macho's collections (including the most recent show at Magic Pony) have a consistently twisted harmony throughout hundreds of individual pieces.

If you think you get it, check out, Team Macho's Kitschy, Gay and Over in a Second, which runs from September 25th to October 26th, 2008 at The Magic Pony.