Manifesto Festival Puts Spotlight Back on Urban Culture this Weekend

Bringing hip hop back into the community spotlight for the second year in a row, The Manifesto Festival of Music & Art returns this weekend with beats, breaks, and creative urban culture for all.

Kicking off tonight with Shad's performance at the Mod Club, the party continues tomorrow with the Manifesto Film Festival at the ROM and Hip Hop Karaoke at Revival; but with an entire weekend of events including a massive FREE concert featuring Rascalz, k-os and k'naan at Nathan Phillips Square, you won't want to miss a moment of this urban culture experience.

As the brains behind some of best elements at this year's Beats Breaks and Graffiti festival at Harbourfront, organizers of this year's Manifesto Festival are prepared to step into the spot light with their own 5 day celebration of Toronto urban arts and music. As you can see from the highlights of the 2007 Manifesto Festival, this grassroots community event combines all the elements of hip hop culture into one massive weekend.

Dozens of Toronto hip hop artists and enthusiasts behind the Manifesto event have come together to bring us some of the freshest and finest entertainment in urban culture, including: 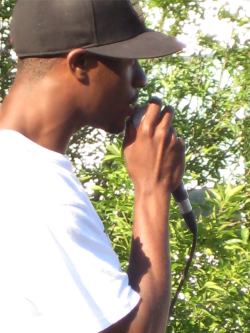 The Us & Them Art Exhibition, a celebration of one of Canada's oldest street art organizations. Dstrbo and Starship of HVW8, as well as dozens of other artists, will be featured at this explosive exhibition of street art. Taking place on Friday at the Well and Good Art Space, expect live projects and collaborative pieces from some of the most talented graf artists around.

Live from Scarborough, a giant outdoor concert, barber battle, t-shirt show and community jam will take place on Saturday at the Scarborough Civic Center. That same day, Earl Bales Park will host Move On Up 2, a huge outdoor concert and dance competition. You can be sure to catch some crazy moves here, as crews compete for a $1500 prize to the music of artists like Rochester and JD Era.

Sunday is The Main Event - literally. Nathan Phillips Square will host a massive free party for everyone, featuring the music of Rascalz, k'os, k'naan, DJ Fase and DJ NaNa plus more. Graffiti artists Anarkia, Case, Artchild, Elicser, EGR and Skam will also create a 70-foot mural, and the entire public space will be filled with elements of urban culture.

For those who don't get enough at Sunday's Main Event, there is also an official after party at CiRCA, with NYC's DJ Premier vs. Pete Rock and break dancing by Starting from Scratch. $30 advance tickets are a great deal for this incredible line up, and a very reasonable way to cap off an entire weekend of affordable hip hop satisfaction.