Explore China Through Art This Week

As all eyes will be on this Friday's Summer Olympic opening ceremonies in Beijing. But this week in the city a number of galleries and festivals are aiming to take the spotlight off the athletes and direct our attention to both traditional and contemporary Chinese visual art.

The third annual Chinese Lantern Festival has returned to Ontario Place. This year, the larger-than-life illuminations by Zigong province's master lantern makers take on the world's most recognizable landmarks.

When I saw this I felt like I was going through It's A Small World again, sans the (annoying) singing puppets. Pictured above is a delicate recreation of the Manfeilong Pagoda in Yunnan, built with 250,000 porcelain plates, cups, spoons and bowls.

General admission for the Chinese Lantern Festival is $25 for adults and is open from 7:00 to 11:00 pm until September 1st.

A little further east at the Harbourfront's York Quay Centre, Twain showcases the aesthetic connection between works of Canadian and Taiwanese artists, ranging from sculpture and ceramics to paper and jewelery. Running through September 21st, Twain is part of World Routes 2008's TAIWANfest which happens later this month.

Another notable visual arts event during TAIWANfest is Legends in Water-Colour, a two-day free exhibit featuring the country's premier watercolour painter Kuo-Jen Shen and renowned Canadian artist Doris McCarthy. This will be shown exclusively on August 23 and 24 at the Marilyn Brewer Community Space.

On the off-the-beaten arts path in Scarborough, traditional Chinese paintings by Sam and Sarah Chiu are also on display this week at the Chinese Cultural Centre of Greater Toronto. The same building also hosts the Shoushan Stone Exhibition collected by Raymond Chou. The Shoushan stone carvings from Fuzhou, Fujian are prime examples of China's centuries' worth of craftsmanship. 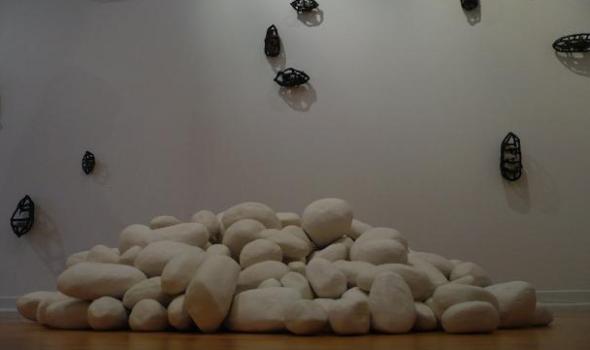 Stonethoughts runs until the end of this month, gallery hours from 10:00 am to 5:00pm Tuesday to Saturday.

At the ROM, the Shanghai Kaleidoscope is still ongoing. Take advantage of the museum's half-off admission on Fridays from 4:30 to 8:30 pm.