I don't think that even at the Museum of Canadian Contemporary Art would a visitor experience Iain Baxter, Kelly Mark, BGL, Douglas Coupland, Shari Boyle and Terrence Koh all in one show. And this was just one corner of the new show by Adam Matak (previously interviewed on blogTO), entitled Signs of Culture: Contemporary Canadian Surrogates that opened Saturday, August 16th at the historic Great Hall Gallery (1087 Queen St.W).

It seems that every few months I stumble across a show by Matak on Toronto's Queen Street West. I had spotted him at Propeller, then a few months later at the now disbanded Walnut Gallery, and now with his latest series of paintings at the Great Hall.

From the street, the show nearly looked like a collection of shoe logos - his creamy-white images hover over a slick, black background. Think Jordan-Jump-logo-meets-Rorschach-inkblots - a bit of a leap from his typical candy-coloured works. 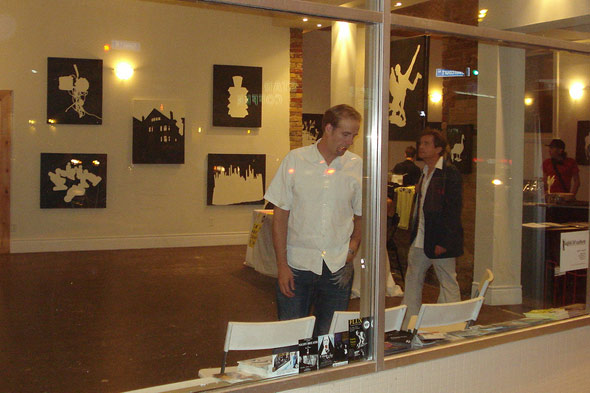 Building off his last show where he created paintings of paintings, Matak's new "surrogates" of Canadian art invite viewers to look beyond the details of individual works to discover trends which connect them as "Canadian". Matak identifies three themes that emerge in this project - Collections (endurance based art), Constructions, and Conjoineds (works of figures and animals fused together or with extra limbs).

The show becomes even more interesting when trying to imagine the original works that Matak draws from. It makes one think: "Is this show erasing other art? Is it painting's triumph over sculpture?"

The Saturday opening was even visited by Dance Like No One Is Watching, a special presentation as part of Toronto's Summerworks Festival. Their colourful outfits added to the black and white ensembles the artist had attending guests dress in to match his black and white "icons".

The show is open until Friday, August 22nd and I highly recommend it for anyone that wants an intro to the contemporary art world, or even for those that just like cool images. I consider myself quite knowledgeable about contemporary art, but after attending the show, I realized there were many Canadian artists that I had never heard of. But his show was a great introduction, and actually sent me off to look up some of these artists he does "covers" of - making this show, as Marshall McLuhan would say, a very cool medium.