This past Friday, I decided to take a chance. Nothing life-risking or anything, but still nothing I've ever done before.

I chose to go to the opera. I'll give you a minute to let that sink in.

If you've seen any of my other music posts, you'll probably see why this is pretty left field for me. And while I am a closet fan of classical music, its not in my ipod rotation.

But this would not deter me from attending opening night of Richard Strauss' Elektra at the Canadian Opera Company's new facility at the corner of Queen and University.

And I have to say, both the show and the experience were worth taking the chance.

To give you a quick overview of the opera itself, I'll use a quote from the media release (as it sums it up nicely). "Based on the Greek tragedy by Sophocles, Strauss' one-act opera details Elektra's pursuit of revenge on her mother, Klytamnestra, for the sexual betrayal and murder of her father Agamemnon." And like all good Greek tragedies, this story is full of blood, gore and death (as translations are provided above the stage in English). Take that, Slayer! 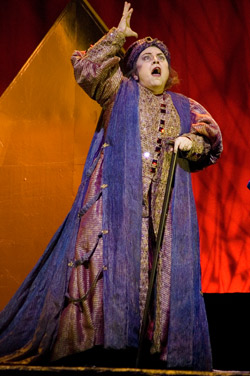 The lead role of Elektra is considered by many to be one of the most demanding roles in Opera. This task was handled beautifully by the world famous soprano Susan Bullock. She floated through the light sections, and belted out the fortes with power and control. As well, Alwyn Mellor, who plays Elektra's sister Chrysothemis, nearly stole the show with her performance. Overall a very powerful cast of singers, but these two really stood out for me.

And while the show was a treat in and of itself to see, the entire experience of being at the opera was also a pleasant treat. A fine glass of wine in the new atrium before the show, followed by good seats (they all appear to be good seats in the new space, as the layout has more of a staggered box-seat design, rather than tiers) in a great light space. Acoustically, the sound was perfect, with the singing on stage blending perfectly with the orchestra, not competing with it.

So why not live a little and check out the opera? If you're under 30, you can nab tickets for just $20. It feels good to dress up every once a while, and realize that opera isn't just for social elitists and cultural snobs. You might even be the best dressed one there!

Big thanks to Ryan Couldry who attended the dress rehearsal and provided the fantastic shots. You can see more of his shots from the show in his Photendo Flickr page.