Artscape Plans For The Future

As a full time artist, I can't afford to buy food. So I appreciate a free panel discussion that offers coffee, cereal and other breakfast items. Yesterday morning, sipping free apple juice, I attended Vision:2011.

Organised by Toronto Artscape and The Canadian Urban Institute in the Joseph Workman auditorium, the event featured speakers Tim Jones - CEO of Artscape, Margaret Ziedler of Urban Space Property Group and Ken Greenberg from Greenberg Consultants Inc. On the agenda - ways to provide and protect affordable spaces for artists in Toronto.

Tim Jones, the morning's first speaker, optimistically outlined Artscape's plan for the next 5 years. It includes not only the Green Arts Barns (pictured here), for which Artscape recently received 3 million from the province, but their IDEA project - redeveloping the site of Artscape's headquarters at 60 Atlantic Ave. into "a full service resource center for creative entrepreneurs" and The Givins Shaw School- a partnership with the Toronto District School Board to repurpose the school into a community arts hub. In all Artscape currently has 8 capital projects on the go. 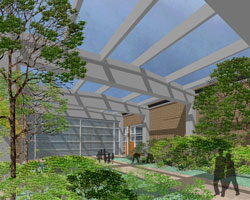 The following presenters were less optimistic but very informative. Both expressed outrage at the Ontario Municipal Board's decision to demolish a building in the Queen West Triangle currently housing 80 units of affordable living space for artists, to build condos. Greenberg voiced the need for new mechanisms for the city to look at building projects and likened the current process of approval to the judicial system, which tries criminals.

Margaret Zeidler put forward that it is impossible for developers to act as a positive agent of change in the community without new legislation forcing them to do so. Zeidler went on to speak about her purchase of 401 Richmond in 1994 when the real estate market in Toronto sucked. She maintained that her conversion of 401 Richmond into affordable art studios could not have happened in today's overheated real estate market - the cost of the building would be too high to rent out so cheaply.

Getting a sense of the challenges to progressive development practice in Toronto and a sneak peek at what is being done was inspiring. Practical information always leaves me feeling giddy. I left the auditorium at 1001 Queen St W. full of purpose, danish and a cup of coffee to keep me warm.

*Artscape recently celebrated its 20th anniversary. Click here to read more about it.