10 years ago the only way to get your comic fix was to go down to the local comic shop and read them until you plunked down a few bucks, or were summarily booted out. In that time, web comics have sprouted from all corners of the globe covering a near infinite amount of topics and styles; whatever your comic kink, there's at least 15 web comics that have you covered. At blogTo, we're kicking off a monthly interview with Toronto-based web comic artists, and I thought it'd be a good idea to start off with my favorite web comic on the planet, VGCats.com, a comic wherein the 2 feline protagonists are thrust into parodies of video games week after week. Writer/artist Scott Ramsoomair was nice enough to take the time out of his busy schedule to answer a few twisted questions well-suited to his twisted personality. We get a bit of a scoop on some interesting tidbits like his new book (and new content included in the book), the cartoon, and new projects coming next year.

--
And don't mind the jump around nature of the questions. When dealing with the random, one must become the random... 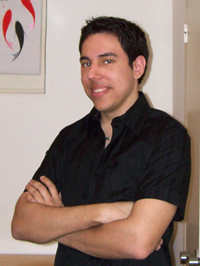 BlogTO: You lived out in the boonies for many a year while working on VGCats. Why the move to Toronto earlier this year?

Scott Ramsoomair: Just a change of pace. Like to travel so it was time to go somewhere new. Plus I was born here way back so it's always a plus.

BTO: What's the most "interesting" thing or event that's happened to you or that you've been involved in since arriving in the city?

SR: Geeky answer would probably the best videogame jackpot ever. It was this out of the way outlet mall but they had stuff from comadore, to jaguar, and even mega old vector games. It was like a stash of everything gaming for the past 20 years.

BTO: You've got a pretty distinct style in your work, and I don't think I've ever once seen you reuse a panel or drawing in all the 200+ comics you've put out. If you could invent a word to describe your style, what would it be? Please define the word, Webster's Style, as well.

SR: Oh I do reuse frames occasionally. Most of the time it's for comedic effect. I do try and draw as much as possible however. If I don't keep drawing the style won't evolve. So it's in my best intrest to not be lazy about it.

BTO: It's written plain as day on the site, "Updated Mondays". I don't think I've ever seen a comic actually appear on its scheduled day. Why do you lie to us, Scott?

SR: Because I enjoy your tears. It make me feel alive!

BTO: Imagine a fantasy world where in Toronto, all 3 major home consoles (PS3, Xbox360, and the Wii) are all freely available to the public, and they all cost the low low price of $1.00. The catch is that no one is allowed to buy more than one console. What do you recommend today, and what do you think you'll be recommending in 6 month's time?

SR: Xbox 360 has some of the best games right now. Even though I'm a total Nintendo fan there just aren't many games fo r the system right now. As well it's looking likeMGS4 will be a 360 release as well. So there goes my need for PS3 for the moment. In 6 months I'd say Wii. All it's got right now is Zelda.

BTO: For all the fans foaming at the mouth over the possibility of "accidentally" running into you, what are your homes away from home in the city?

SR: Usually catch my down at Hairy Tarantula comic shop at some point. Great guys down there with a full webcomic book collection.

BTO: Not sure if you could tell, but I was really, really hammered when I dragged you out onto Church St earlier this year during pride. Did ya have a decent time?

SR: Heh, it was new. Just wish all the bars weren't packed beyond words.

BTO: What kinda of gear do you use to make your magic "every Monday"?

BTO: A glass of India Pale Ale, or a pint of Guinness? And no, you aren't allowed to be influenced by your recent trip to the UK.

SR: Guinness. And not because that was all I drank there. That and cider. Everyone loves their cider there.

BTO: Will you be sitting in on any round tables or just plain checking out any Cons in the coming months in Toronto?

BTO: Whatever happened to issue 200 of VGCats?

BTO: What would it take for you to stop drawing VGCats? Do you have plans to start something new? After 200+ comics, you gotta be going a little mad by now.

SR: There are two projects I'll launch in 07 that'll help me try something new. We'll see how it pans out.

BTO: When's the cartoon coming out, and is it gonna cost the viewers $$$ to check it out like it does for Ctrl-Alt-Del (which is b.s. cuz I'm super poor)?

SR: Indefinitely delayed. Or until I can find a way to do it while offering a free version as well.

BTO: Like the comic every week, a VGCats book is eventually going to arrive. Give us the deets on what's going to be inside it and how much we can possibly expect to fork over for it.

SR: Was suppose to launch this year but it missed the Holiday window. Should be out real soon. Except it to retail for $20-25. It'll feature almost entirely new content. As in all the old comics have been redrawn to not look like ass.

BTO: You have 20 words to say whatever you want to Toronto, what are they? Is it a small recipe? A list of expletives? The tension is eating away at us...

Thanks again to Scott for the interview. VGCats is allegedly updated every Monday, but Scott is notoriously meticulous with his creations (or lazy, I can't figure out which), so check back often if it isn't up by Monday night; it's always well worth the effort. Scott has also been taking part in Child's Play in a big way, auctioning off original art work and showing his support in other ways. Please, check out our previous post on blogTO for more info on Child's Play, and how you can make a difference to kids in need this year, and subsequent years.