Inside the offices of a Toronto advertising agency

Grip Limited is an advertising agency best known for "The Movie Out Here" for Kokanee. Located at 179 John Street just north of Queen, the office, which is best known for "The Big Orange Slide" is home to almost 200 art directors, video producers, and other creative professionals who work on creating video, print, and digital ads for brands like Honda, Acura, Bell Canada, and Pizza Hut amongst others.

Now in its 13th year, Grip started as a collection of eight creative partners in February 2002, working out of a makeshift space just above the Firkin south of Queen. Initially, the agency worked exclusively for Labatt producing advertising for television, radio, and traditional print mediums.

Over the years, they have expanded to offer advertising across all media as well as web and application development services. 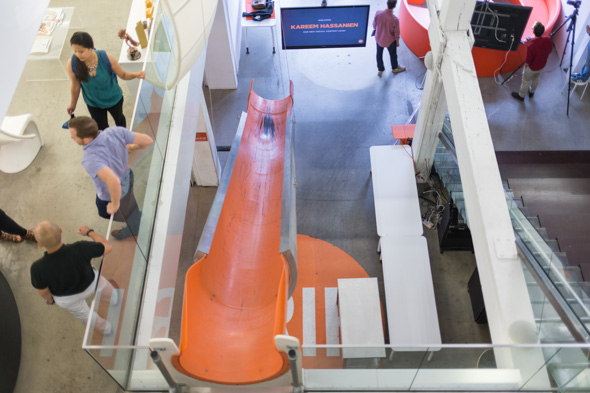 The Grip Limited headquarters occupy three floors with the signature orange slide and bleachers connecting the fifth and sixth floors. Johnson Chou, the designer behind the popular Red Bull office, was the mastermind behind the space and had casually floated the idea of a slide as a light-hearted, very literal element to connect the initial two floors of the office together.

The partners fell in love with the idea and it stuck. Many years later, clients and employees are still fascinated by the colour, size, and unexpected speed of the skid-marked OG slide that can launch you into a camera crew if you're not careful. 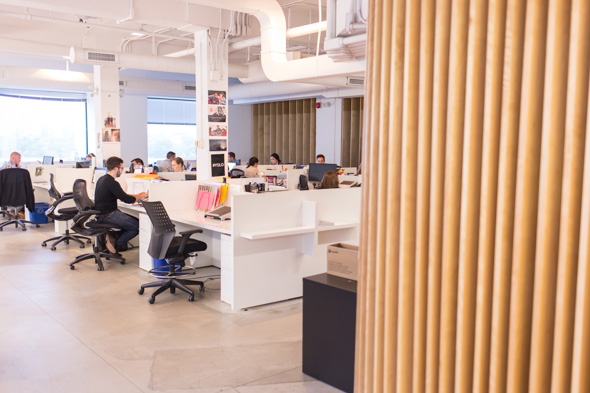 The agency first started out as a fairly traditional TV commercial production house where most accounts had budgets or several tens of thousands of dollars and timelines of several months to produce the work. Back then, Grip used to contract work out depending on the account's specific need. 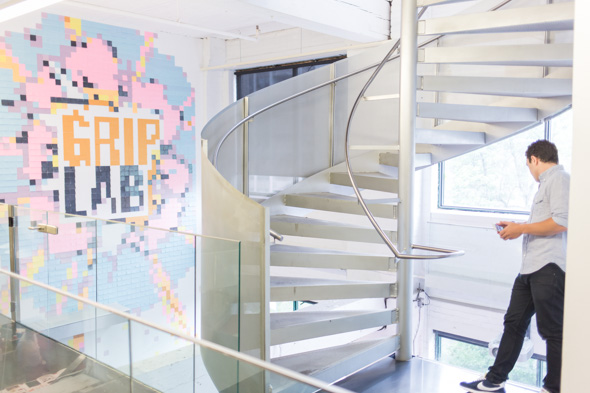 Nowadays, with online media and content, more and more of Grip's clients are coming in with much smaller budgets and timelines. In an effort to be quicker and efficient with client money, the office has several editing suites and sound booths and most of the staff are permanent in-house team members. 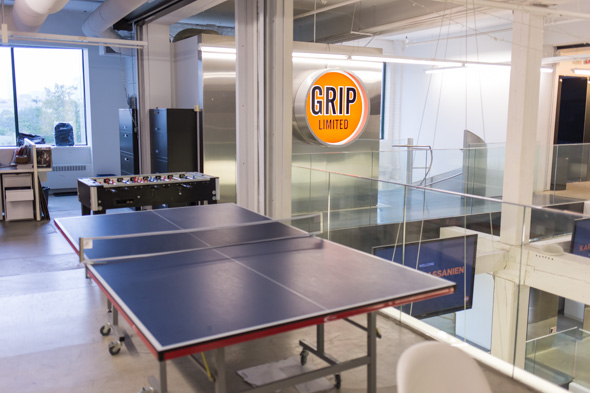 The company prides itself in being a privately-owned agency that has the ability to produce work much more quicker than their competitors, and attributes their success to tight-knit collaboration and small, nimble work teams. 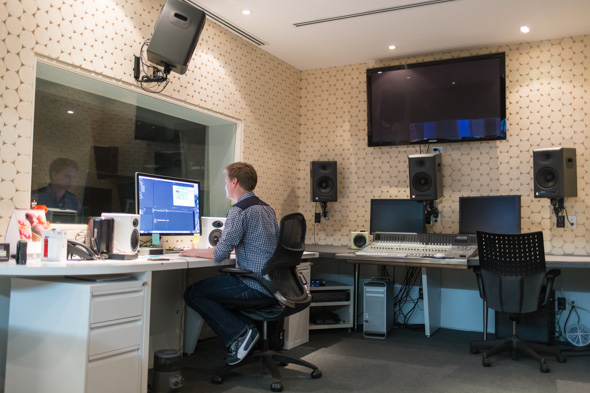 In stark contrast, Grip's all-hands meetings, guest lectures, and staff events are a common and rather enjoyable occurrence. Staff members gather around the bleachers and seats across all three floors. Equipped with four very large, very mobile television screens, presentations are a breeze and easily visible to everyone at the company.

As is evident from the quirky decor, personalized employee spaces, and the multitude of pets around the office, work culture and employee happiness is of utmost importance at Grip. 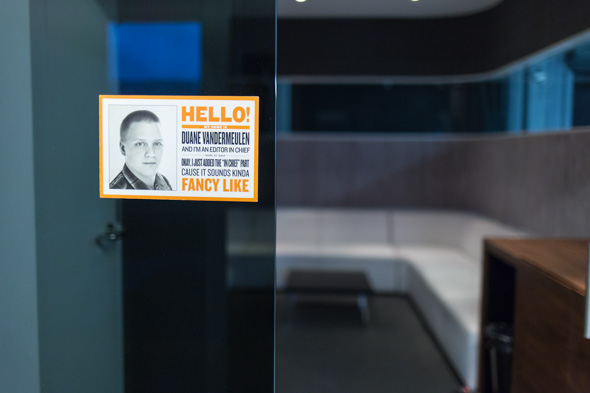 Every Thursday, the office gets together over beer and snacks to listen to a guest speaker from outside the industry. Karen Sampogna, head of Human Resources at the company is the mastermind behind the logistics of office culture.

One of her favourite speakers was famed Canadian war-journalist, Louie Palu, who spoke about his time in Afghanistan and the importance of being true to the story instead of getting involved in the politics. 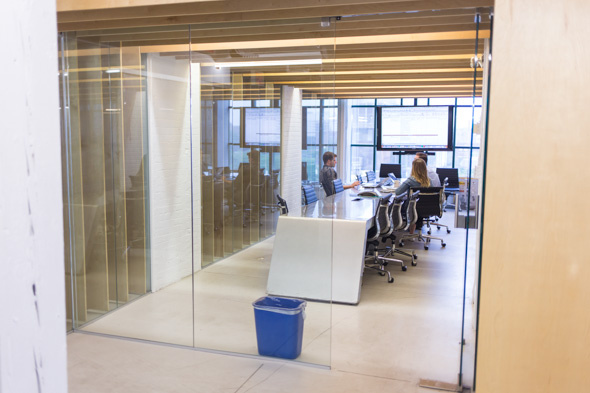 A significant part of the three floor plates are dedicated to common areas like meeting rooms and eating areas. The rest of the space is a mix of open work spaces, board rooms, and editing and recording studios. 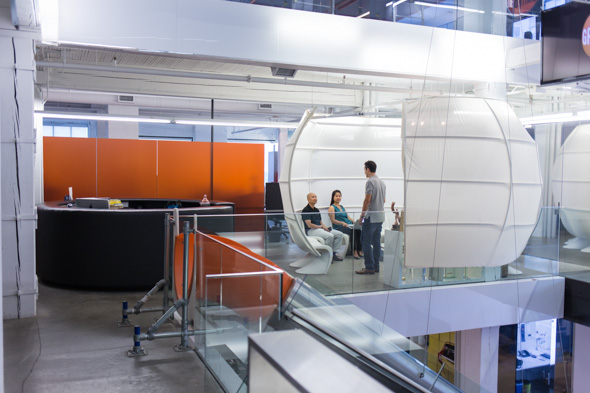 During our visit, part of the seventh floor is under construction to make room for yet another editing suite, while another part of the floor is being converted into a photography studio.

The office architecture makes use of a lot of steel and furniture in tones of grey, and uses the Grip orange as an accent colour on certain walls, rotating logo signs, and communal desks. 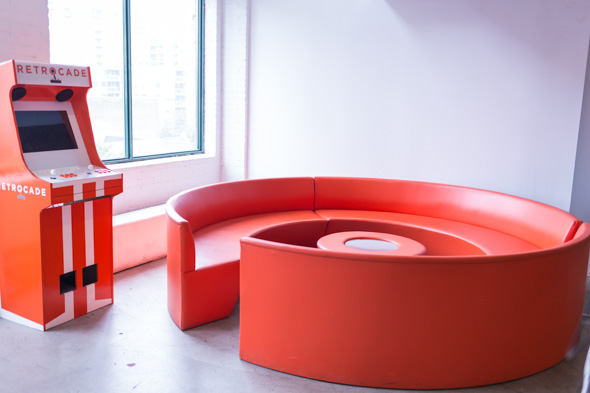 What offices would you like to see featured on the site? Send suggestions to editors [at] blogto [dotcom].

Here's how Rogers is compensating customers after that disastrous service outage

This is what caused the Rogers outage across Canada yesterday