Behind the scenes at the TTC training facility

Working at the TTC can be pretty dangerous. Subway track workers spend their day in dark, noisy conditions with the constant threat of electrocution or injury from passing trains. Streetcar and bus drivers must safely direct a large, valuable vehicle through an ever changing obstacle course while courteously processing passengers and reacting to unexpected problems.

At the TTC's Hillcrest facility on Bathurst St., new recruits are put through their paces in a variety of controlled environments from hyper-realistic bus and streetcar simulators to an accurate mock-up of the inside of a subway tunnel--dim light, deafening noise and all. The result, the TTC hopes, is a safer ride for its staff and customers, even if sometimes a driver forgets to apply the parking brake.

Here's a look behind the scenes at the TTC's training facilities. 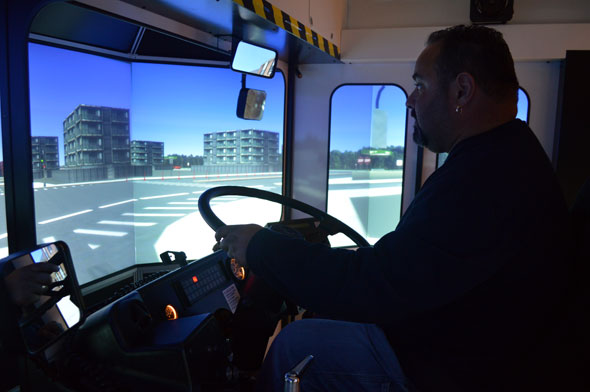 The bus simulator is a FAAC Inc. MB-2000--the standard training device at transit systems across North America, including Los Angeles and New York City. "It allows you to teach a simple, core concept like 'how do I get a bus around a corner' without damaging everything in sight," says Jack Martin, the instructor in charge of the machine. "We can write it down, there's a textbook that explains how it should be done, there's a slide presentation that explains it's done, but that doesn't give you a chance to really do it," he says. 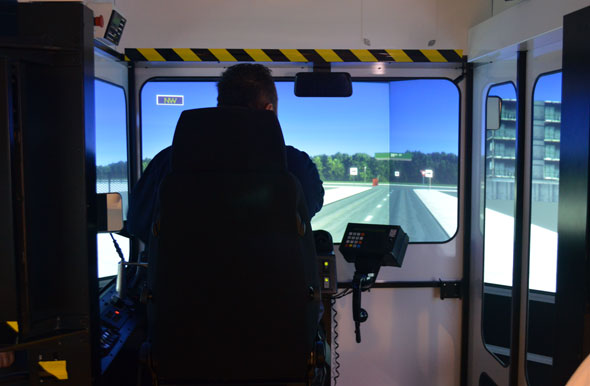 The simulator has small screens where each mirror would be and the steering wheel jolts and vibrates to virtual objects that pass under the wheels (trust me--avoiding the curb is harder than it looks.) Training takes 25 days. On the second day, students advance to a driving real bus in a controlled environment. Those who fail the training are not allowed to apply again for two years. 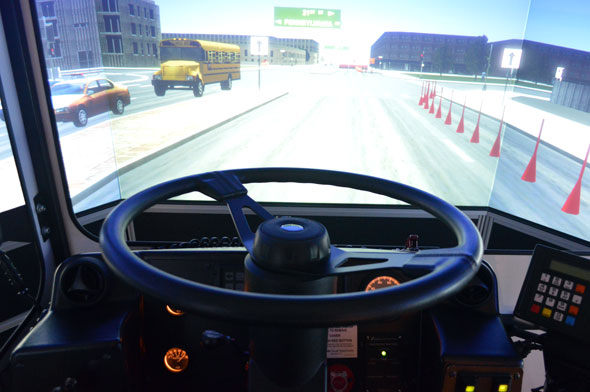 "Almost every single person who comes into this room thinks they need to learn how to drive a bus around a corner--the truth is they already know," Martin says. "There are two simple instances in your life where you had to learn this exact same skill ... one of them is pushing a shopping cart around a supermarket ... the first time you learned it was when you were five, pulling a child in a wagon. If you turn around the tree too soon, your sister falls out and now you're in trouble." 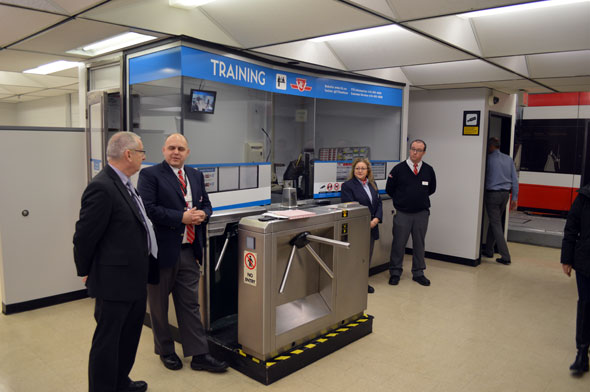 Fare collectors receive training inside a mock booth at Hillcrest. The fake station entrance includes a working turnstile, credit and debit machine, and cash vault which, by the way, only armoured security are allowed to access.

The new streetcar simulator was installed a few months ago as part of the TTC's $1.2-billion contract with Bombardier for a fleet of new low-floor vehicles. The training cab is an exact replica of the real thing: the seat vibrates when the virtual streetcar moves over track switches and the swoosh of outside traffic is piped in through speakers. The only things that aren't a match are the mirrors. 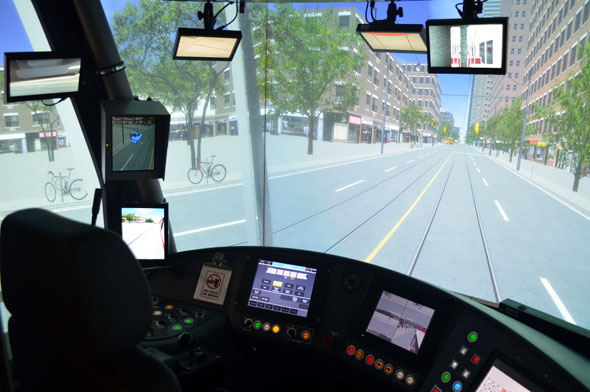 The training streetcar operates in a virtual version of Toronto. Landmarks like City Hall, the Art Gallery of Ontario, and Yonge-Dundas Square glide by out the "windows." Most importantly, every inch of the TTC's streetcar network is rendered accurately in the computer down to the slightest curve. 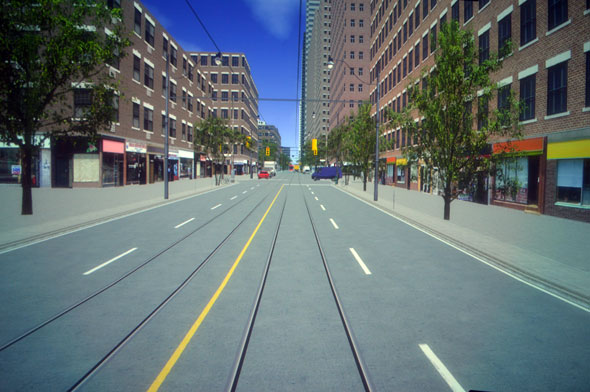 Just making the new streetcar stop and start is surprisingly simple. The operator uses a touch-sensitive lever to control power and braking; push it forward and the vehicle begins to accelerate, pull back to slow down. Just don't let go. The system knows when the operator's hand has left the controls and if it isn't replaced within four seconds the emergency brake will bring the journey to a sudden halt. 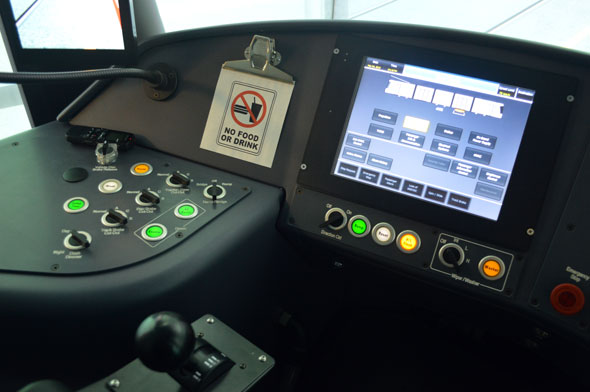 Once trainees are comfortable with starting and stopping the instructors add in controlling the doors, signalling, even contacting transit control or dialling 911 if there's a medical emergency or a disturbance on board. Fixing technical issues like blown fuses or detached trolley poles is also part of the curriculum.

"It's just getting people used to things that can go wrong," says Lionel Jordan, a senior streetcar instructor. Instructors can also steer pedestrians into the street, swerve cars, and cause all manner of chaos with the weather. "Here we can throw snow at you in July," he says. Day can turn to night in seconds and rain has been known to fall from a clear blue sky. 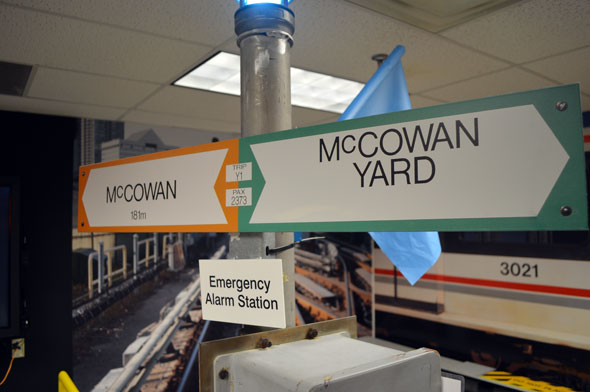 The track level room was added after the death of 49-year-old track worker Peter Pavlovski, who was struck by a work train near Yorkdale station in 2012. It includes an accurate mock-up of the track inside old cut-and-cover and newer bored subway tunnels, as well as the Scarborough RT guideway.

Avoiding the 600-volt third rail is important, but so is understanding the various warning lights and signals used in the tunnel environment, says Karim Rajan, a subway instructor. "It allows our trainees to get some hands-on experience before actually going to track level and experiencing the real thing," he says. 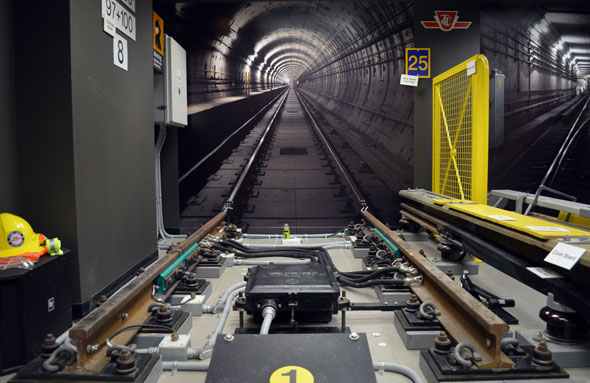 The lights in the training room can be dimmed to match the ambient light level in a real tunnel while large speakers play the sound of passing trains, drowning out conversation. The gear on the floor includes a basket for catching trash and a device that automatically activates the emergency brakes of a train if a signal is passed at red. 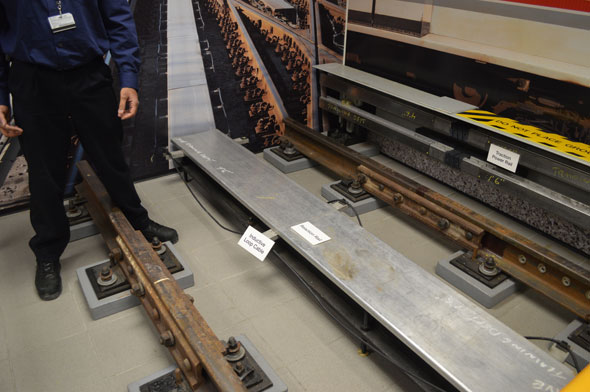 Unlike the subway, Scarborough RT track includes a nickel-iron reaction rail that generates forward thrust when combined with an electromagnet mounted under each of the trains. The live third rail is located to the side.

Bus drivers are shown how to alter the display at the front of the bus, load the bike racks, and safely secure mobility device users inside the vehicle, says instructor John Benyon. Safely fastening a wheelchair may sometimes take up to 10 minutes, he says. 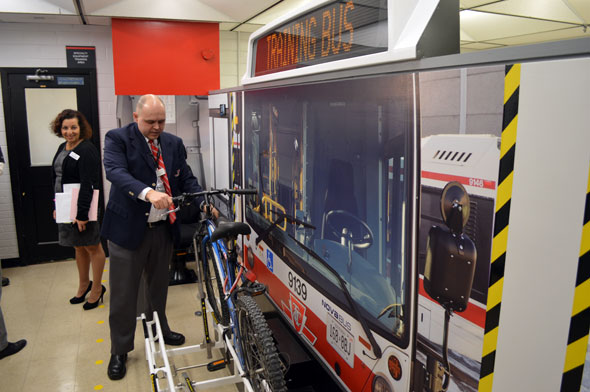 "We teach the new hires as well as the recertifications how to properly use the bike rack," says Benyon. Most cyclists know how to load their bicycles, but drivers are on hand to offer assistance. All operators must return to the classroom at least once every five years for refresher training. 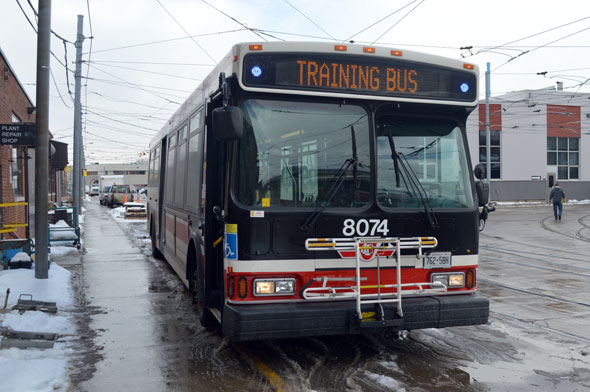 Before graduating Hillcrest and hitting the streets for real, bus trainees must drive a specially equipped training vehicle that tracks and logs their every movement. 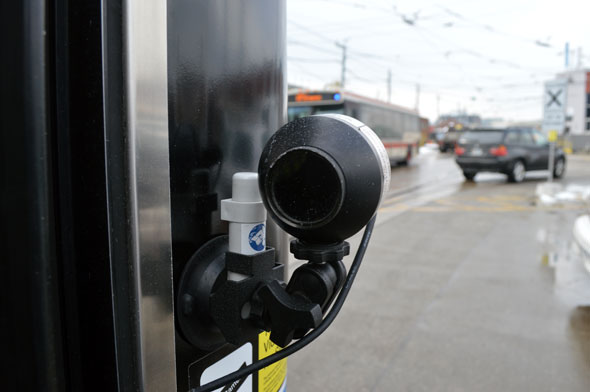 Cornering g-forces, braking force, whether or not the driver looked both ways at a stop sign are all tracked by an array of sensors and cameras on the inside and outside of the vehicle, as well as by an instructor. 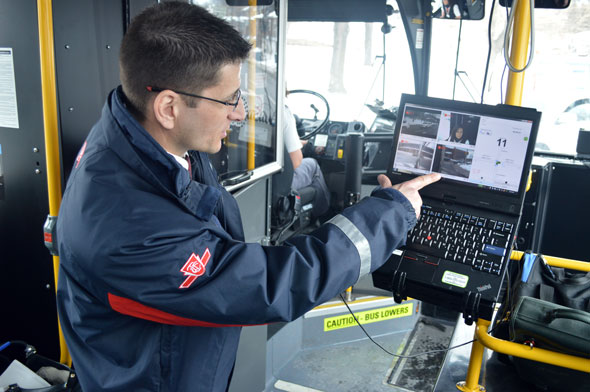 Xavier Andrenucci monitors the actions of fellow instructor Pam Ashcroft as she steers the sensor-equipped bus along Davenport Rd. Her speed and the current g-forces being applied to the passengers in the vehicle appear in real time on the laptop screen. At the end of the test the computer generates a report based on the quality of the drive. 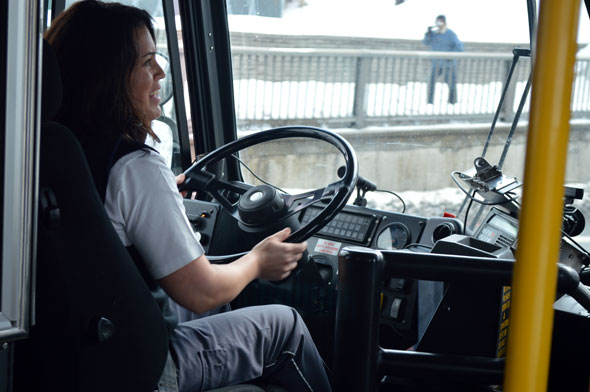 Ashcroft says the TTC bus that was filmed coasting into a parked vehicle at Bathurst station last night likely didn't have its spring brake applied. The device acts like the parking brake in a regular car, stopping the bus from coasting when it's in neutral or switched off.